I just love this from The Politico Scorecard:

A series of new MoveOn.org radio advertisements looks like they could backfire, big-time.

The liberal group is up with ads against six House Republicans attacking them for their support of offshore drilling. Problem is: most of the targets represent energy-rich districts where drilling is viewed favorably, to put it mildly.

One target, Rep. Mike Conaway (R-Texas), represents a west Texas district where the discovery of oil in the 1940s created wealth throughout the region, and the energy industry has since dominated the region’s economy.

And four of the six GOP targets hold heavily Republican seats and aren’t even facing credible challengers this election.

How tin-eared are these ads? One Democratic challenger, whom the ads were meant to help, said:

“MoveOn’s opposition to drilling is 100% wrong, and so is John Culberson’s opposition to investment in renewable energy,” said Skelly. “Houstonians want honest solutions to our energy challenges. Drilling for oil is a crucial component of a balanced energy plan, and I strongly support it.”

Even better, the National Republican Congressional Committee also responded to the ads.

“We wholeheartedly endorse this colossal waste of funds,” said NRCC spokesman Ken Spain. “Not only is MoveOn.org’s anti-drilling position out of step with 70 percent of Americans, but a member like Mike Conaway who represents the Texas oil patch will probably see his approval rating surge upward as a result of these ads.”

Tom Burnett Sr. entered the lion’s den on Saturday to oppose the crescent memorial to Flight 93 (now called a broken circle). An excerpt from the beginning of the Somerset Daily American‘s banner headline story about division amongst the families:

“Tom Burnett Jr. led the effort to take the plane back,” his father said. “When I was on the design jury, I saw the red crescent of embrace and realized it was an obvious and blatant symbol of Islam. It does not properly honor our people — those Flight 93 heroes. I think it’s a travesty that it’s moved along so fast.” He called for an investigation into the design. When he has brought up his concerns, some of the task force and advisory commission members have dismissed him, he said. “This is a cataclysmic mistake,” he said. “I’m going to save you from yourselves. I’d like to ask for an unbiased, transparent, honest investigation. This is just a terrible, terrible mistake. I’m asking every American — we must stop this mistake. This panel doesn’t own the design, I don’t own it, Pennsylvania doesn’t own it, all of America and all of the world own it.” He said he is also tired of the controversy, but that they must honor the heroes properly. It will reverberate in history. “I’m not going to stop fighting this thing, it is very, very bad,” Burnett said. “Wake up. Get your heads out of the sand.”

Other Flight 93 family members roared back. What is usually a three hour quarterly meeting of the Memorial Project stretched to five hours as over twenty people signed up to speak on both sides. One side wants scrutiny. The other is desperate to avoid it. The pattern at the meeting was simple and consistent. Critics of the crescent design pointed out damning facts and called for independent investigation. Defenders of the broken circle insisted that there is nothing to investigate, and cried out for critics of the design to stop putting them through this agony. If the claims of the critics are not accurate, independent investigation would end the agony. If the crescent/broken-circle does not actually point within two degrees of Mecca, then put this explosive claim to rest by showing where the crescent does point. If there are not actually to be 44 inscribed translucent blocks emplaced along the flight path (matching the number of passengers, crew, and terrorists), it is a simple matter of opening up the design drawings and counting. If the defenders of the crescent had truth on their side, they would be eager to have it exposed. Unfortunately for them, the giant crescent does point to Mecca, and somehow they don’t want the public to know it. Todd Beamer’s father is on the side of the crescent? The highest profile defender of the crescent design was Mr. David Beamer, whose son Todd issued the “Let’s roll” signal to re-take Flight 93. Mr. Beamer, beloved by conservatives for his opposition to Congressman Murtha, had not previously taken a public position on the crescent design. He has apparently gotten involved in fundraising for the memorial, and announced at the meeting that he has undertaken two months of due diligence, looking into criticisms of the design. Listeners expected Mr. Beamer to continue with a report on his fact-checking efforts, but he did not have a single word to say about any of the claims that Mr. Rawls and Mr. Burnett have put forward, launching instead into an extended condemnation of Alec Rawls for his “obsessive” persistence. If he found that the giant crescent does not point to Mecca, surely he would have said so. Similarly for the terrorist memorializing block count, or the placement of the 9/11 date in the exact position of the star on an Islamic crescent and star flag. What better way to be rid of this dastardly Rawls fellow than to expose his claims as a fraud? Mr. Beamer’s silence about what he found speaks volumes, and not just about the crescent design. Who could fact check these claims and then be silent about his findings? Don’t look at the design drawings! Every defender of the crescent had his own scheme of evasion and obfuscation. Patrick White, Vice President of Families of Flight 93, took Alec Rawls to task for holding up a 2005 graphic of the top of the Tower of Voices, where an Islamic shaped crescent soars in the sky above the symbolic lives of the 40 heroes. This old graphic should not be taken as indicative of the current design Mr. White suggested, as the design has evolving for three years now. Yet the exact same graphic was brought to the meeting by the Memorial Project itself, and was on display right outside the courtroom where the meeting was held. That’s going to make some great video, as will one particularly scurrilous attack on Mr. Burnett, and the victim card played by Project Superintendent Joanne Hanley. Several videographers will be sending raw footage, which Alec will start putting together when he returns to California next week. Big enough to check the facts yet? How big does the conflict have to get before some major media outlet is willing to do their jobs and actually check the facts for themselves? David Dunbar and Brad Reagan of Popular Mechanics were willing to fact-check the “9/11 truth” morons, finding that most of their evidence is deliberately taken out of context, and that none of their claims stand up to the least bit of scrutiny. Come on PM. If we are a bunch of frauds then we are just as much in need of debunking. We’ve even got Flight 93 family members at loggerheads and crying out for relief. What are you waiting for? (A handy dandy list of damning facts to check here.) To join our blogbursts, just send your blog’s url.

This is actually rather predictable, considering PETA’s track record of comparing humans to animals.

They are using the the horrendous, and grisly Canada bus slaying to try to score points for animal rights: 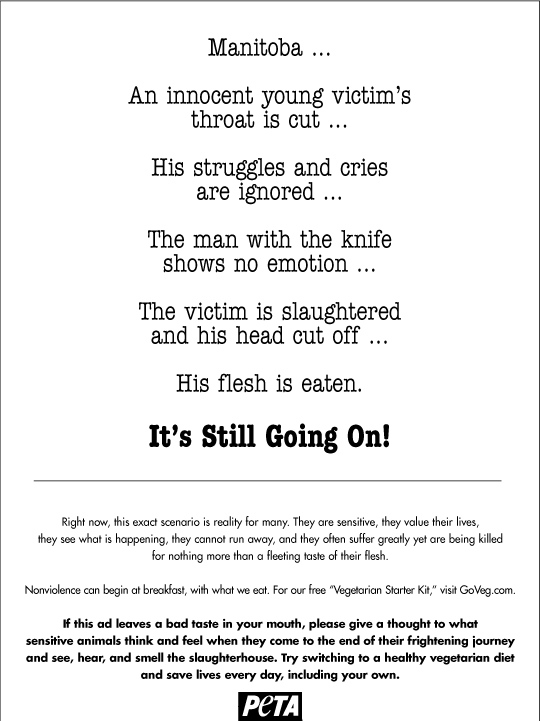 This tragic incident will certainly leave scars on the minds of the other passengers and the victim’s family and friends. While it isn’t every day that a human is violently attacked and eaten by another human, it’s worth noting that it is the norm for many people not to give any thought to the fact that restaurants are serving flesh that comes from innocents who were minding their own business before someone came after them with a knife. How amazingly and conveniently compartmentalized the human mind is…

To stress this very point, PETA will be running an ad in the Portage Daily Graphic comparing the similarities between this gruesome bus butchering and the acts of cruelty and killing performed every day by the meat industry.

Thankfully, The Daily Graphic refused to run the ad.

Wednesday afternoon, People for the Ethical Treatment of Animals (PETA) contacted this newspaper to run a full-page advertisement comparing the stabbing and beheading of McLean to the slaughter of animals for human consumption. The group’s aim is to promote vegetarianism and the non-violent treatment of animals.

The Daily Graphic has chosen not to run the advertisement.

Judging from the comments I read, Daily Graphic readers agree.