On April 6, 1977, Gianna’s 17 year old birthmother (named Tina) sought a saline abortion at seven months pregnant. Saline abortions involve injecting a caustic saline solution into the amniotic fluid, which (normally) causes the fetus to be scalded to death and then delivered dead. In this case, however, things didn’t go according to plan. In the early hours of April 7th, Tina went into labor and gave birth to a living baby girl, Gianna. Fortunately for Gianna, she was born before the abortionist had arrived at the clinic for the day. As a result, instead of being killed at birth by the abortionist, she was transported to a hospital. She was severely injured by the abortion attempt, requiring a three month stay in the hospital, but she survived to be placed in a foster family specializing in high risk babies.

As a result of injuries from the abortion, Gianna was diagnosed with cerebral palsy. Doctors believed she would never be able to sit up, let alone walk. She surpassed all expectations. Today she is able to run, dance, and walk…and has even taken up rock climbing. She has also become a tireless advocate for the pro-life cause.

Many would expect Gianna to be bitter or angry about the fact her birthmother tried to abort her, especially at such a late point in the pregnancy. However, Gianna does not have any hatred towards her birthmother. She has forgiven her mother for the traumatic circumstances of her birth and treats the post-abortion women who hear her speak with compassion.

On April 22, 1996, Gianna testified before the Constitution Subcommittee of the House Judiciary Committee on the issue of abortion. Sadly, out of 13 members of the subcommittee, only 2 were willing to listen to her testimony; abortion supporters boycotted the meeting.

Here is an excerpt of the remarks to which 11 members of the subcommittee refused to listen:

“I am happy to be alive. I almost died. Every day I thank God for life. I do not consider myself a by-product of conception, a clump of tissue, or any other of the titles given to a child in the womb. I do not consider any person conceived to be any of those things.

I have met other survivors of abortion. They are all thankful for life. Only a few months ago I met another saline abortion survivor. Her name is Sarah. She is two years old. Sarah also has cerebral palsy, but her diagnosis is not good. She is blind and has severe seizures. The abortionist, besides injecting the mother with saline, also injects the baby victims. Sarah was injected in the head. I saw the place on her head where this was done. When I speak, I speak not only for myself, but for the other survivors, like Sarah, and also for those who cannot yet speak …” (Read the Full Testimony)

Now she would like to address another unwilling audience, the Democratic nominee for POTUS, about (you guessed it) The Born Alive Infant Protection Act:

I’d like to see him look her in the eyes and tell her that her survival didn’t meet “constitutional scrutiny”, that allowing her to live (after she was born!) was  “burdensome to her mother”, that her life or death was a “religious issue”, that creating a law to save babies like her was a “political maneuver”, or that a law to protect babies like her is “a ploy to overturn Roe v. Wade”.

But something tells me that ain’t gonna happen.

Instead….ironically, on the same day this ad comes out, Obama has presented his followers with this: 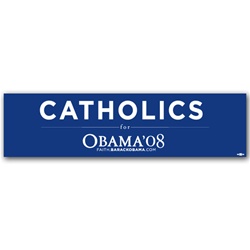 Great news! We now have faith merchandise available for you to show your support for Barack Obama as a person of faith.

Check out the Believers for Barack, Pro-Family Pro-Obama, and Catholics for Obama buttons, bumper stickers and signs….

Believers for Barack rally signs and bumper stickers, along with all Pro-Family Pro-Obama merchandise, are appropriate for people of all faith backgrounds. We’ll soon be rolling out merchandise for other religious groups and denominations, but I wanted to get this out to you without delay.

Well, according to Ace, there ARE  a few “concerned” religious values voters out there who normally vote Republican, and are taking a second look at Obama because…well…because….I don’t know…because we’re all stupid enough to believe that, I guess?!

I see Ed Morrissey has picked up on this story.  Hot Air has the video of Gianna Jessen’s appearance on H&Cs last night, as well as additional links.

When I say “militant atheist” I do mean “militant”:

A man who threatened to behead two women because they were Christians was attacked in self-defense early Saturday and injured so severely, police say, that his eye was to be removed.

Russell Bowman, who called himself an atheist, showed up with a large knife at the women’s apartment in the 700 block of Tia Juana Street about 3:15 a.m., police said.

Another resident grabbed a shotgun and ordered him to put the knife down. When Bowman refused and began approaching, the person hit him with the butt end of the weapon, police said.

Doctors at Memorial Hospital reportedly told police the eye would have to be removed.

Sounds like something from the bible:  a rifle butt to his eye caused him to stumble…and the eye had to be plucked out….but I still think he’ll be thrown into hell fire. 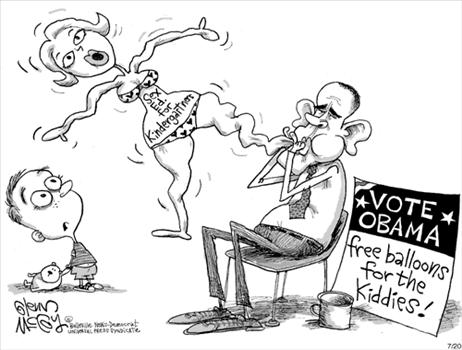 Here’s the ad that has Obama defenders crying foul:

It’s all true. Fact Check.org needs to do a little more fact checking. They could start by going to John McCain’s website which provides a link to the PDF of the sex ed program the Obama campaign sent  to MSNBC when asked about this issue last year.:

The SEICUS Guidelines For Children Between The Ages Of 5 And 8: http://www.siecus.org/_data/global/images/guidelines.pdf

Amy Proctor did a lot of work transcribing the content from the PDF to her site so I don’t want to grab too much, but here is a small part of what was being considered appropriate for 5 – 8 year olds, (level 1):

So much more than “Good touch, bad touch”, as Obama has been claiming.

There’s more at Amy Proctor’s. She says the curriculum gets even worse for the older grades.

Yes, it’s true that parents were given the option to have their children pulled from class, but many parents are fairly trusting of the schools, and yes, the bill from the IL General Assembly, includes the caveat that an “age appropriate” curriculum would be imposed.

Apparently, many people find the above curriculum “age appropriate” for kindergarteners.

Luckily, the bill was killed in the IL Senate.