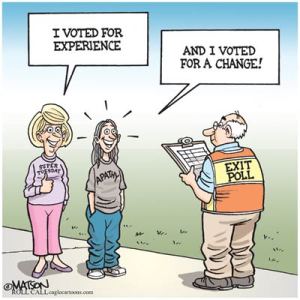 This is paramount to any Republican who wants to keep his spirits up. You will be driven to dispair if you listen to these polls. Get it into your head right now at the get-go, that the polls are going to reflect a monumental landslide for Obama, continuing the media narrative, we’ve all grown so accustomed to.

The McCain Campaign put out this memo on reading the exit polls.

And the indispensable Hillbuzz (bless them!) says it better than I ever could:

The Obamedia is going to do to you what they did to Hillary supporters during the primaries — they are going to lie, and float all sorts of incorrect exit polls, and start revving up to declare Obama the winner.

Drudge Report — mark our words — is going to run that flashing red/blue siren he loves to report McCain losing all sorts of traditional Republican states around midday.  He’s going to get all of you Eeyores hyperventilating.

The goal of the Obamedia is to depress you so much you don’t turn out to vote. Our friend Astrid always falls for this garbage, and we know she is not all alone. She’ll be miserable all day because she’s never learned to turn out the media and just chill out.

Ignore the mind games, and just get out there and vote!

And oh yes, get down on your knees and pray.

3 thoughts on “DON’T LISTEN TO THE EXIT POLLS, TODAY!”