As plans are formulated to promote a new national holiday for Barack Obama, it might be wise to consider ways to celebrate. Obama has proven over and over again throughout this election year that his hubris and narcissism knows no bounds, and while most President elects would poo poo such an outlandish idea, Obama has so far done no such thing, and is in fact, probably already looking at this idea as a fate accompli.

So here are some gift giving ideas for the Obama cultist on your list:

This hand-crafted and hand-painted Obama model airplane was inspired by Obama’s “inspirational campaign”;  “durable and beautifully designed for keeping for many years to come”. 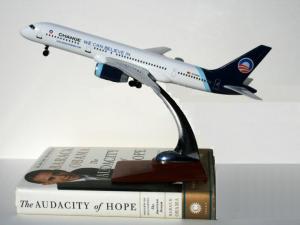 for the kiddies: Barack, The Obama Children’s Book 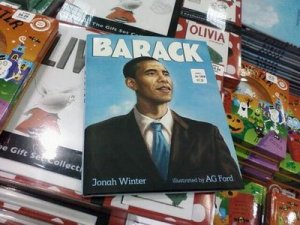 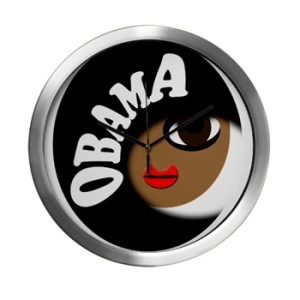 How about this Obama tee-shirt? 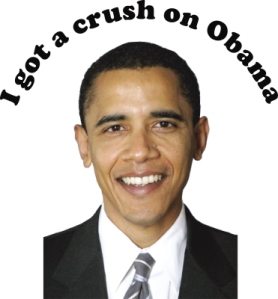 The official “Yes We Can” Album/CD:

Here’s an idea! An Obama Ornament for Your Obama tree: 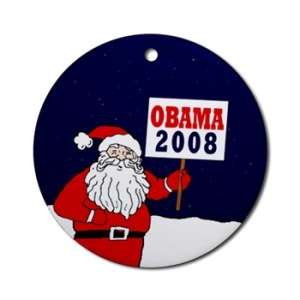 And it’s not too late to own a piece of history: the faux-leather-bound collector’s edition DVD of the “More Perfect Union” speech. 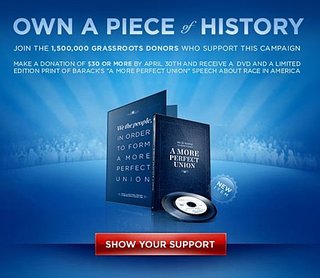 These are just a few ideas, of course. Without any effort at all, you can find many more unique gifts on the internet to give to the Obama cultist on your list.

A word to the cultists, though: Better secure that Obama National Holiday before he has a chance to…ya know ….screw things up too bad. That could be a deal breaker.

Uh oh. Looks like the Obama National Holiday promotion has hit some snags. There’s not as much support for the idea as originally thought. But the NAACP appears to be behind the idea:

The National Association for the Advancement of Colored People, for one, was receptive if not officially behind the idea. Hilary Shelton, the national vice president of advocacy, said Obama’s election was of tremendous significance for “a community that was once enslaved.”

“Certainly this very historic moment in our history is something that should be recognized, commemorated and celebrated,” Shelton said.

The Smoking Gun (of all places!) lists some of the more worthless Obama crap for sale.