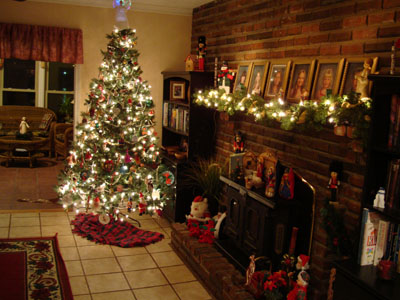 I have collected a formidable amount of Christmas ornaments over the years. My mother and law sent us (my husband and I, plus each of our six children) Hallmark Christmas ornaments for more Decembers than I can count. Add those to the ones I have bought myself at various stores, craft sales and even garage sales. Add those to the hand-crafted ornaments (from my crafty period) and the ones the kids have made at school….it all adds up to a whopping number of ornaments. Way more than can be displayed on one tree, or two trees even. I have also amassed an amazing amount of Christmas decor throughout the years as I enjoy decorating for Christmas.

So starting today, I will feature a pictorial a day until Christmas of my favorite Christmas decorations.

Just for the fun of it. If you’re not in the Christmas spirit yet, you will be, soon.

My living-room tree is the hodgepodge tree, loaded with the most Hallmark ornaments, and highly valued sentimental favorites that date back to when I helped my now college age son make some homemade ornaments at age two. This tree is also laden with many of the cute hand made ornaments the kids made in school. 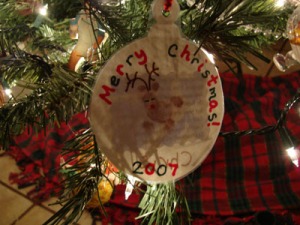 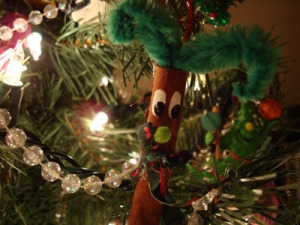 I have six versions of this fingerprint reindeer.    We make these cute cinnamon stick reindeer at home. 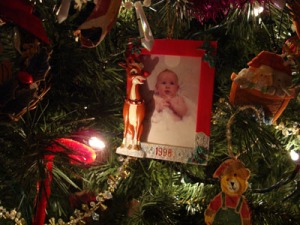 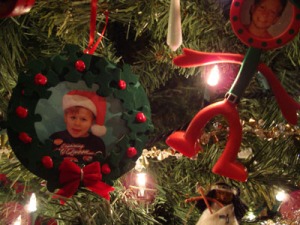 We have scads of picture ornaments, like these. # 4 made a sweet baby angel. That’s #6 inside the wreath. 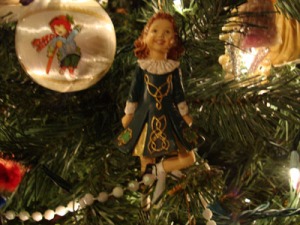 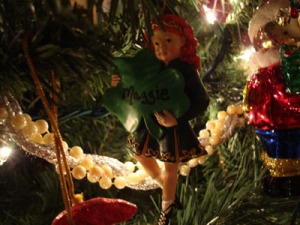 We love our Irish dancer ornaments. 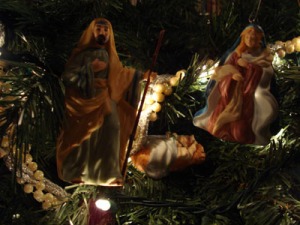 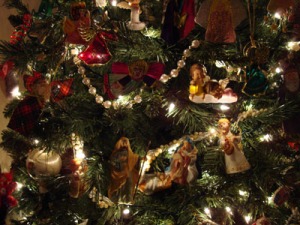 Our Nativity Scene is surrounded by angel ornaments, (and shepherd boy on the left, wise man on far right). 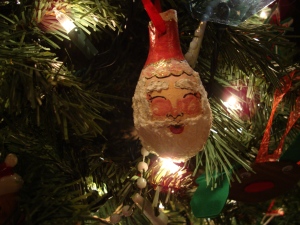 Okay, you’re off the hook, for today, but tomorrow I’ll be back with my dining-room tree.

You can save money on holiday decor with these great coupons at Pro-Flowers.com

Coming to you from the “outer cosmos” of the blogosphere, I am unable, once again, to restrain myself from the desperate, and wingnutty pastime of questioning Obama’s citizenship. Even though, it seems very likely that the whole thing will be swept under the rug…when new developments appear, I just can’t help myself.

Here’s the latest via Atlas Shrugs:

Coming out of Chicago, 2 years 9 months ago, a 26 page report on the importance of getting rid of the natural born citizen clause of the Constitution

Sarah P. Herlihy is employed by Kirkland & Ellis LLP http://www.kirkland.com . Note: this law firm is based in Chicago.

Bruce I. Ettelson, P.C. (aka PARTNER), is a Member of the finance committees for both U.S. Senators Barack Obama and Richard Durbin.

Check out that PDF:

Sounds like one of the more “fatally flawed” parts of the Constitution, doesn’t it? Why should anyone abide by something so obviously stupid, and racist?

Also…Has anybody taken the time and initiative to track down Obama’s hospital in Hawaii?

And no hospital has yet been found that has a record of Obama being born or mom ever being there.

Here’s the running list of Obama’s missing docs, (via Atlas):

Original, vault copy of Certificate of Live Birth in the USA — Not Released

University of Chicago scholarly articles — None

Currently, there are 16 cases in 12 states (with 2 before the Supreme Court) contending that Barack Obama is constitutionally ineligible to be sworn in as President of the United States.

David Horowitz wants the the right to get over it:

If the facts in the Obama case were not in dispute it would be a different matter. No one doubts that Arnold Schwarzenegger was born in Austria to Austrian parents and therefore is ineligible to be President under our Constitutional rules. But in Obama’s case the facts are in dispute and Obama — who is now president-elect — will dispute them. And that means that 9 unelected officials, all of whom have partisan allegiances, will decide those facts and therefore decide whether he is to be president. So the real question is what would be the political consequences of having 9 justices — and more likely 5 justices — overturn the will of 64 million voters.

Consider the bitterness, the pathological hatred of Bush, the sabotage of America’s war effort by Democrats who believed that his election was illegitimate. Consider the 2 month delay this caused in the transition to the new administration and how that affected our inability to prevent 9/11 (the comprehensive counter-terrorism plan commissioned by Bush arrived on his desk on 9/10). We are fighting wars on two fronts. The attack on Mumbai is a reminder that the same could happen here at any moment. Do we have the luxury of a fratricidal conflict within our borders?

I see his point, but my mother always taught me, two wrongs don’t make a right. I’m sorry that Obama lied to the American people. If it turns out that he lied about his eligibility, it is he who has disenfranchised them – not the Justices.

The media is starting to grudgingly do (incomplete, and inaccurate) stories about these questions. I think they’re in CYA mode at this point, making a minimum effort to cover the story in case it turns out to be the Constitutional crisis many believe it to be.

The media is also starting to notice the Constitutional issue I mentioned here with Hillary Clinton’s appointment to Secretary Of State.

I’d just as soon have the Republicans not press this one. Who else is Obama going to tap for this position? Les Aspin? Wesley Clark? No thank you. We’ll take Hills. We’re not happy about it, but good God, look at the alternatives.