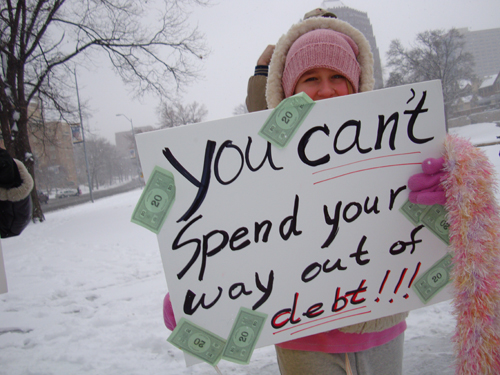 Stop spending our future…is that too much to ask?

Critics of the tea parties are alternately alarmed or dismissive, and quite a few are blaming the  phenomenon on either  Fox News, talk radio, or Republican organizations – anything but what it actually is; a genuine grassroots expression of widespread alarm and dismay over the out of control borrowing  and spending coming out of Washington. The idea that the thousands of Americans who have been demonstrating, and/or plan to demonstrate on Wednesday, are nothing but pawns of Fox News, talk radio, or Republican think tanks is ridiculous on its face.

The vast majority of these people have never participated in a demonstration in their lives, but have been insulted and provoked to the point that they are taking to the streets, organizing loosely – yes, often spontaneously on Twitter, Facebook, and blogs.

We’ve been enduring one outrage after another, for the past several months, and frankly many Americans feel compelled to do something…anything before we wake up one morning and no longer recognize our country. We’ve been offended and horrified into action.

If the left really wants to know who the real organizer of these tea parties is, they should look no further than the Community Organizer in Chief, himself.  He is our inspiration.

Meanwhile, an anti-bank counter-protest sponsored by Firedoglake’s Jane Hamsher, epically failed, with a mere 12 people showing up. Watch her scuttle away when asked by Ed Frank of Frank Strategies to back up her crackpot bull horn pronouncements:

Great post about the Vast Left Wing Conspiracy, over at Accuracy in Media, which sums up:

With that background in mind, it’s obvious that the left’s carping about the “phony populism” of anti-tax “tea parties” across America also is a case of projection. Liberal activists, and lefty bloggers in particular, are so skilled at manufacturing outrage that they can’t imagine a case of genuine grassroots anger.