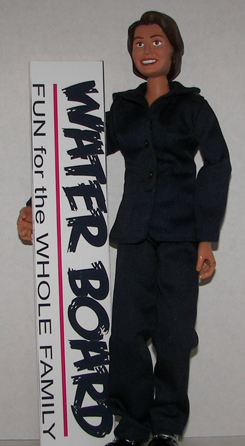 NANCY PELOSI Action Figure complete with Water Board. She is in stock but we are already backed up 250 orders in pre-sales. Get her TODAY Only $49.95

Too bad she doesn’t look anything like Nancy Pelosi. Actually…none of this company’s celebrity action figures look like their subjects, but, oh well. It’s the thought that counts….
But  shame on that doll company for finding humor in something as serious as waterboarding. Shame shame shame.

That reminds me, have you seen the latest Steven Crowder video?:

Hat tip: Blatherings for the video

You’ll have to excuse me if I’m not doing any serious reporting on the Pelosi/CIA memo story. But there’s really nothing new or surprising to report.  Sure she didn’t back away from her smear of the CIA, and sure the Dems are now circling the wagons, but does that surprise, anyone?

The Republicans don’t want to call for her removal until she’s been given a chance to corroborate her claims with the memos  they won’t let us see. Which is kind of frustrating.

Congressman Peter Hoekstra is not letting this go…this is from the WSJ, dateline May 22, 8:47 pm:

Congress Knew About the Interrogations

It was not necessary to release details of the enhanced interrogation techniques, because members of Congress from both parties have been fully aware of them since the program began in 2002. We believed it was something that had to be done in the aftermath of the 9/11 terrorist attacks to keep our nation safe. After many long and contentious debates, Congress repeatedly approved and funded this program on a bipartisan basis in both Republican and Democratic Congresses.

Last week, Mr. Obama argued that those who implemented this program should not be prosecuted — even though the release of the memos still places many individuals at other forms of unfair legal risk. It appeared that Mr. Obama understood it would be unfair to prosecute U.S. government employees for carrying out a policy that had been fully vetted and approved by the executive branch and Congress. The president explained this decision with these gracious words: “nothing will be gained by spending our time and energy laying blame for the past.” I agreed.

Unfortunately, on April 21, Mr. Obama backtracked and opened the door to possible prosecution of Justice Department attorneys who provided legal advice with respect to the enhanced interrogations program. The president also signaled that he may support some kind of independent inquiry into the program. It seems that he has capitulated to left-wing groups and some in Congress who are demanding show trials over this program.

Members of Congress calling for an investigation of the enhanced interrogation program should remember that such an investigation can’t be a selective review of information, or solely focus on the lawyers who wrote the memos, or the low-level employees who carried out this program. I have asked Mr. Blair to provide me with a list of the dates, locations and names of all members of Congress who attended briefings on enhanced interrogation techniques.

During a conference call with bloggers, on Wednesday, Rep. Hoekstra said he thought the materials would be provided, soon.

This thing ain’t over, yet.

I had the pleasure of listening in on  a conference call with Ed Whelan,  Andrew McCarthy, Eric Erickson, Michelle Malkin, and many other bloggers and radio hosts, to discuss the nomination of Yale Law School Dean and transnationalist Harold Koh to be the legal adviser at the State Department.

I wrote about Koh back in March after his name was first brought up.

Michelle Malkin liveblogged…(I was multi-tasking – what can I say?):

Andy McCarthy: “It’s clear from Dean Koh’s record that he’s a post-sovereign transnationalist. A term he’s used himself. It’s my position that American jurisprudence is built on the concept of national sovereignty and Koh would mark a radical departure from that…Opposing Koh is not an attack on his integrity or a claim that he is not a very brilliant law professor…I want to stipulate that all these things are so…you can oppose somebody on policy grounds without taking the position that he is the devil incarnate…

See No Koh: The Coalition To Preserve American Sovereignty for info and news:

According to the Facebook group trying to get transnationalist Harold Koh confirmed, public opposition to the Koh confirmation is growing:

A recent anti-Koh effort by the “Traditional Values Coalition” (see http://www.traditionalvalues.org/modules.php?sid=3598 and http://washingtonindependent.com/38069/conservative-coalition-takes-aim-at-obama-legal-nominee) has generated hundreds of anti-Koh letters to Senators.

Kudos to Traditional Values Coalition for reaching out so effectively and building the pressure to oppose Koh’s dangerous nomination.

Ed Whelan has done extensive research on Koh and encourages people to look through the dossier he’s compiled on him. It’s everything you ever wanted to know about Koh, but didn’t have an entire afternoon to read. But go skim through it, anyway to get a taste of just how awful this appointment to the State Dept. would be.

The Gun Owners of America are especially concerned:

The full Senate will soon vote on whether to confirm Obama nominee Harold Koh as Legal Advisor to the State Department.  As columnist Oliver North reminds us, “The person holding the position helps formulate and implement U.S. foreign policy; advises the Justice Department on cases with international implications; influences U.S. positions on issues considered by international bodies; represents the U.S. at treaty negotiations and international conferences; [and] has input into the drafting of Security Council resolutions and the interpretation of treaties.”

Koh is an activist lawyer who wants to make U.S. law subordinate to international law, particularly on gun control.  In 2002, he gave a speech titled “A World Drowning in Guns” which, according to Heritage’s Brian Darling, called for a U.N.-governed regime that would make the U.S. “submit information about their small arms production” (read more here).

Whelan and McCarthy agreed that time was of the essence on this matter, because Koh’s appointment may be coming up for a vote shortly after Memorial Day. That means getting the word out. Sending emails…spreading the word on blogs, talk radio, Facebook, and most importantly of all, (and they couldn’t stress this enough)…get ahold of your Senators. Even the Democrat ones…especially the Democrats, because we need some moderates Dems to help us shoot this down.