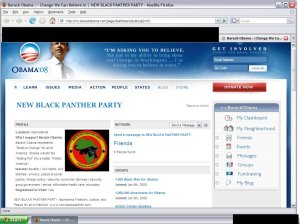 Speaking of criminal enterprises, how about that Justice Dept. ruling on the New Black Panther Voter intimidation case?

Last week, I called the Justice Department to inquire about an unusual decision they made to dismiss default judgements in a voter intimidation lawsuit the government filed under the Bush administration against the New Black Panther Party.

You remember the case of the menacing NBPP thugs who threatened voters at a Philly precinct. I blogged about it many times since the fall.

The Bush DOJ filed suit against Malik Shabazz and two of the local NBPP radicals who were on site — one with a billy club. None of them filed an answer to the lawsuit, putting them all into default. I am told this is the easiest way to win a lawsuit. But instead of taking the default judgment that DOJ is entitled to against all of the defendants, the department last week dismissed the lawsuit against two out of the three defendants. As Election Journal (which broke the story with exclusive video of the intimidation) notes, one of the individual defendants who was dismissed, Jerry Jackson, “is an elected member of the Philadelphia Democratic Committee and was a credentialed poll watcher.”

According to a legal source familiar with DOJ procedures, dismissing a lawsuit won by default is unheard of.

Gabe has more at AoSHQ.

Armed thugs blocked voting stations and said, “You are about to be ruled by the black man, cracker.”

Obama’s Justice dept doesn’t have a problem with that.

A little more about this from the Corner’s, Hans A. von Spakovsky:

The Southern Poverty Law Center says that the New Black Panther Party is a hate group, similar to the Ku Klux Klan. Whether that is so or not, two of the officers of the NBPP were caught red-handed, one brandishing a weapon, threatening white voters at the polls. One complaining witness, Bartle Bull (a former Robert Kennedy campaign staffer and civil-rights lawyer) said “it would qualify as the most blatant form of voter intimidation” he had ever encountered.

As a former DOJ alumnus, I have never, ever heard of the Division refusing to take a default judgment, especially in a situation where the defendants are basically admitting they violated the law. The facts indicting the DOJ seem damning, and no good explanation seems possible. Indeed, it raises a serious question whether straightforward but pernicious racial-identity politics are at play, the same kind driving
the president’s Supreme Court nomination. Do the same people who excuse Sonia Sotomayor’s racist speeches allow Holder and Co. to dismiss racist intimidation by the New Black Panther Party? Should application of the civil-rights laws (by Sotomayor in the Ricci case and the DOJ in the NBPP case) really  turn on the sympathies the officials have for different racial litigants? Should racist minority members get a pass when whites would not? Does the Left believe that only white supremacists (or Republicans) can engage in racism or intimidation of voters? Do the prohibitions in federal voting-rights laws not apply to radical organizations with Marxist orientations?

This scandalous DOJ action also is consistent with the partisan decision I wrote about recently in NRO where the Civil Rights Division dismissed a lawsuit under the National Voter Registration Act. The suit was dismissed without explanation just one month after the Democratic defendant announced she was running for the Senate. Race and partisan politics seems to have completely permeated the decision-making in the Civil Rights Division. Unless there is some other convincing non-discriminatory reason for their actions, Eric Holder and the president must be held to account for these brewing scandals.

I’m sure as soon as the media is through blaming pro-lifers for late term abortionist, Dr. Tiller’s murder, they’ll be all over this story.

Previous posts at Nice Deb about the New Black Panthers:

7 thoughts on “Why Would The DOJ Dismiss The Charges Against The New Black Panthers?”