The same despot the Obama Administration tried to protect, last week, when rumor was afoot that there would be  “a move against Mr. Zelaya”. While Obama was studiously avoiding “meddling” in Iranian affairs as protesters cried out to the world for help in their fight for freedom from tyranny, he was busy meddling behind the scenes in the affairs of Hondurans, to keep a tyrannical, leftist despot in power.

What happened in a nutshell, as explained by Dan Collins at POWIP:

You won’t really grasp it from the AP article, but the Honduran coup is about President Zelaya’s extra-constitutional attempt to extend his term. He would be out of office in January, but he wanted a referendum to permit him to run again. The Supreme Court stated that would be unconstitutional. The army general who was to have distributed the ballots refused, and was sacked. The military then snatched him from his villa and shipped him off to Hugo.

The rumors that Zelaya was shipped off to Venezuela were unconfirmed. According to Fausta, who has been following the story,  all day, he is in Costa Rica.

A commenter at Gateway Pundit says:

this is not a coup, this is the Honduran Armed Forces carrying out an order of the Supreme Court of Honduras and the congress, as well as military leaders that refused to buckle to Zelaya’s attempt to fully Chavez-ize the nation….

In other words, it was a triumph for freedom from leftist tyranny…and that probably gives Barack Obama heartburn.

Allahpundit has another idea as to why the Obama administration acted as they did:

I guess Team Barry figured that if they didn’t come out loudly against this, suspicions inside the country about the military being in cahoots with the U.S. would fester.

I disagree. I don’t think he was trying to use “smart power”. I actually believe that Obama reflexively takes the anti-Democratic position in any conflict….period.

Introduced two weeks before this year’s Presidential Inauguration, H.J.Res.5 calls to amend the Constitution by removing the limit on the number of terms a President can serve. It would effectively repeal the 22nd Amendment, approved by Congress in 1947 and ratified by the States in 1951.

Such legislation has been on the political scene for many years, and never goes anywhere.

But things change, as Obama will tell you.

In case you were thinking that Obama’s profoundly wrong position on Honduras was going to be corrected this week, now that’s it’s clear that the people have spoken, and Zelaya has been deposed, think again…Obama is standing firm with the Socialist thugs Zelaya, and Cahvez:

As Drew succinctly opined at AoSHQ:

America…on the wrong side of every foreign policy matter since January 20, 2009.

Coups, interference, and the shifting standards of Obama; Update: Coup or ‘military impeachment’?

Haha...Chavez is taking his cue from Ahmadinejad, no doubt:

They led the most powerful forces in healthcare — the trade groups representing doctors, insurance companies, hospitals and drug makers. Any one of them could stall, if not derail, President Obama’s hopes of overhauling the U.S. healthcare system.

Instead, they stood with Obama before TV cameras at the White House and pledged their cooperation. For Obama, the show of unity gave momentum to perhaps his most ambitious domestic goal.

When the president met privately with the health industry leaders that day, Stern and a second Service Employees International Union official were the only labor representatives in the room.

In a fractious labor movement fraught with rivalries and mutual suspicion, Stern’s close association with Obama has given him cachet that may prove important in the fierce competition to lure new members.

But Stern’s access to the White House has also provoked jealousies. His opponents paint him as a polarizing figure that Obama elevates at his own peril.

The Obama-Stern relationship has emerged as one of the most curious within the young administration.

The SEIU spent $60 million to help elect Obama, according to the union. Stern said the group deployed 100,000 volunteers during the campaign, including 3,000 who worked on the election full time.

Now in the White House, Obama has continued to derive political benefits from the union. It was the SEIU’s health chief, Dennis Rivera, who helped bring industry to the table to start talks on a healthcare overhaul.

With nearly 2 million members, the SEIU says it has people in 13 states whose senators are considered important targets in the lobbying effort behind the emerging Democratic healthcare bill. The union wants to coax those senators into voting for the bill.

Stern can boast that union officials are scattered throughout the Obama administration. White House political director Patrick Gaspard is a former executive at an SEIU local based in New York. No other union has placed anyone at such a high level in the White House.

Does it seem brazen to you, that under the  health care proposal being considered in the Senate, only unions’ health benefits would avoid being taxed?

Who are the SEIU?

With 1.8 million members across the United States, Canada, and Puerto Rico, the Service Employees International Union (SEIU) ranks among the largest and fastest-growing unions in North America. It has more than 300 local affiliates and 25 state councils. Giving voice to its wish to radically transform an American society that it deems rife with inequity, SEIU’s mission is “to improv[e] the lives of workers and their families and creat[e] a more just and humane society.” Classifying Women and minorities as the most aggrieved victims of discrimination and maltreatment, SEIU notes that 56 percent of its members are women and 40 percent are “people of color.”

And as many of us know by now, ACORN, and the SEIU were started by the same person, Wade Rathke, an SDS alumni like Ayers and Dohrn (who eventually started Weatherman). Also, as was discovered last year, SEIU locals 100 and 880 and ACORN are run out of the same address on 1024 Elysian Fields Avenue in New Orleans. The SEIU is also implicated in the Blagogate mess in Chicago,  apparently acting as the intermediary between the Blagojevich and the Obama camp.

It’s nice to know that some curiosity has been sparked in the MSM by all this….it reminds me of the AP’s big scoop, last December, (yeah one month after the election):

MORE about the SEIU, ACORN and The White House at The Union Label Blog and Atlas Shrugs.

Are Former SDS Radicals Trying To Steal This Election?

I wonder how many songs Neda will inspire? I’ve heard a couple, already…This heartfelt ode is by the well known Persian singer, Siavash:

With less than 24 hours notice, and temps in the triple digits, a sizable crowd of KC area citizens showed up in front of the Johnson County Courthouse in Olathe, KS, Sat. afternoon (June 27) to protest the God-awful cap and trade bill passed by the House, yesterday.

Here are some  pix, with commentary, as always:

People had to scramble to get signs ready with less than 24 hours notice.

We attracted lots of honks, and thumbs ups…

I enlisted hubby and youngest to help display signs…

Had to be said… 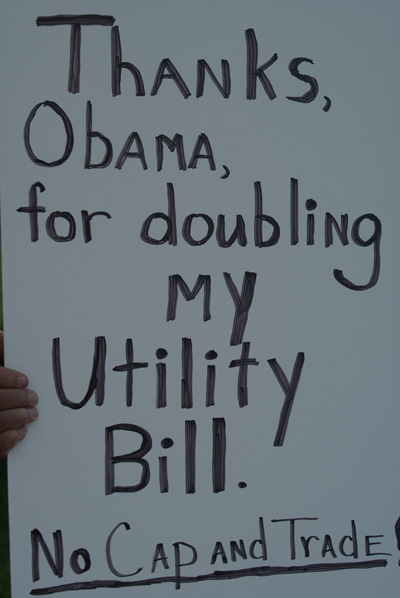 Who is for this? 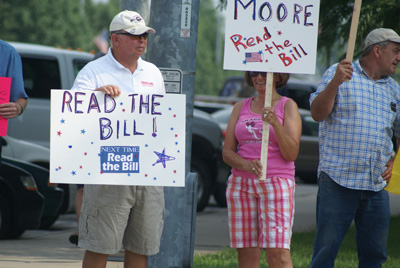 *Boehner did his best… 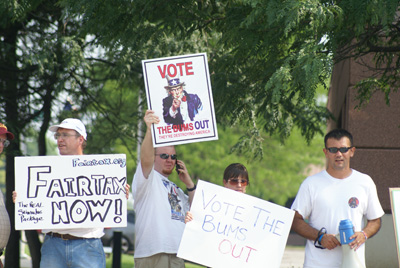 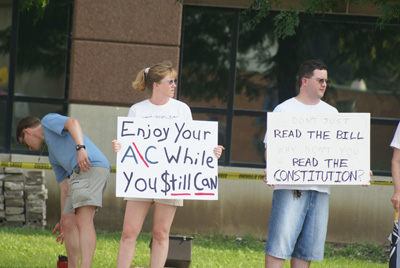 If only most Americans were this informed… 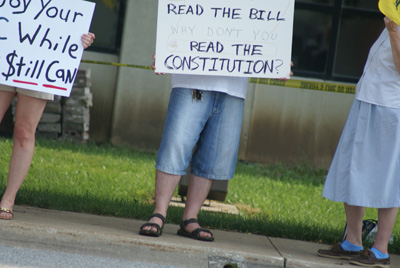 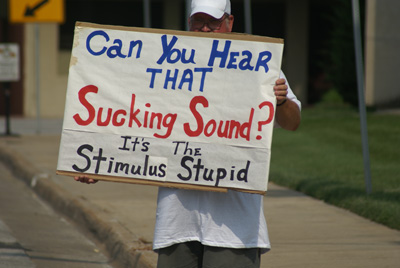 Hey, I have an idea…let’s keep voting for people who will tax us into oblivion… 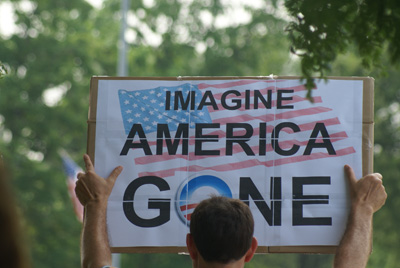 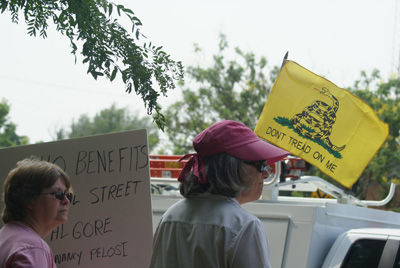 Obama in an uncharacteristically honest moment in Jan, 2008.

*This is good…Via The Hill:

When asked why he read portions of the cap-and-trade bill on the floor Friday night, Boehner told The Hill, “Hey, people deserve to know what’s in this pile of s–t.”

All previous tea party posts can be found, here. (just keep scrolling down).

Names and numbers via Michelle Malkin:

The 8 cap-and-tax Republican turncoats again are:

As Dr. Zero said in the Greenroom:

Recite the names every chance you get, and if you live in one of their districts, never miss an opportunity to remind your fellow voters what they have done. Let them know their representative voted to steal four thousand dollars from their family, as tribute to the weird state religion of radical environmentalism. Spread the anger at foolish politicians who vote on poisonous trillion-dollar bills without reading them, much less their last-minute 300-page amendments.

Love to know what they got for their betrayals.

On a lighter note, the last tweet, last night, from Newt Gingrich’s American Solutions was:

Thanks for making calls today! Together, we made it much closer than Pelosi expected. The #energytax won’t make it thru the Senate.

Let’s pray that it doesn’t so we are not reduced to an America that looks like this.

Demonstrate your disgust with the results of the Cap and Trade vote in the House of Representatives. Come send Congress a message! Join us tomorrow!

This location was chosen because of a previous event we are taking part in during the early afternoon that is only 1 mile away.  If we are able to get a location in MO set-up, we will post that on the website.

Possible sign ideas:
Stop Cap and Trade
Take Our Country Back
Keep My Job
Where’s My Vote
Cap and Trade Must Go
Thanks For Doubling My Energy Bill

My ideas:
“Hey, what happened to the ‘95% of us are not getting a tax increase’ promise?”
“Global warming my ass….you just want the tax revenue for all of your expensive government programs”
Too wordy?
how about: “Global warming is an inconvenient hoax”
The other event mentioned is the Olathe Picnic and Straw Poll:

Olathe Picnic: June 27, 2009 at 10:00 a.m.
Republican stars US Sen. Sam Brownback and US Rep. Todd Tiahrt, and keynote speaker KMBZ talkshow host Darla Jaye among others will speak at the Olathe Republican Party annual Picnic and Straw Poll June 27 at the Mahaffie Stagecoach Stop in Olathe. The family-friendly event features a hotdog and hamburger picnic with informational booths from political candidates and organizations as well as speeches from local legislators and candidates for statewide and congressional offices.

Attendees will be able to cast their votes for the 2010 US Senate, Secretary of State, and 3rd Congressional District races as well as their preference for the 2012 Republican Presidential Candidate in the $2 straw poll. Only one vote per person.

Besides Brownback and Tiahrt, confirmed speakers include both secretary of state candidates, Kris Kobach and JR Claeys, and both 3rd District Congressional candidates, Macie Houston and Daniel Gilyeat. Many may recognize Gilyeat as the Iraqi war veteran who was given a new home through Extreme Home Makeovers.

To find out if there’s a Cap and Trade protest near you, see Michelle Malkin.