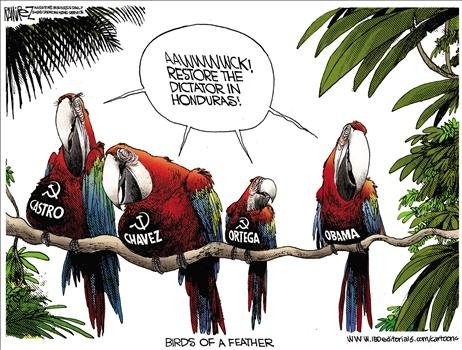 Many of the proposals made by Costa Rican President Oscar Arias at U.S.-backed talks have already been rejected by one side or the other in the dispute over Honduras’ June 28 military-backed coup, which has become a key test for democracy in Latin America and for U.S. diplomacy in the region.

“These agreements must be adopted as soon as possible because each day that goes by increases the weight on the shoulders of an innocent people,” said the Costa Rican president in a statement distributed to reporters.

Arias, who won the Nobel Peace Prize in 1987 for helping end Central America’s wars, said that under his seven-point plan Zelaya would return to Honduras’ presidency but cede control of the armed forces to an electoral court a month before elections, which would be moved forward a month to late October. The unity government would include representatives of Honduras’ main political parties.

Other points of the plan are an amnesty for all political crimes committed before and after the coup, and that Zelaya agree to not hold a referendum on retooling the constitution – the proposal the sparked the coup. An international commission would monitor compliance with the accord.

There was no immediate reaction to the proposals from representatives of either Zelaya or the interim government of Roberto Micheletti.

Here’s a video essay of the official chronology of events leading to Zelaya’s ouster.

The interim government of Honduras rejected a proposal to reinstate ousted President Manuel Zelaya on a day of crucial talks to resolve the leadership crisis. Negotiations began Saturday following an ultimatum from Zelaya that appeared to leave little room for compromise.

They don’t want the S.O.B back, period.

A Spanish Catalan newspaper is reporting that Honduran authorities have seized computers found in the Presidential Palace belonging to deposed president Mel Zelaya. Taking a page right out of the leftist dictator’s handbook, these computers, according to the news report, contained the official and certified results of the illegal constitutional referendum Zelaya wanted to conduct that never took place. The results of this fraudulent vote was tilted heavily in Zelaya’s favor, ensuring he could go ahead and illegally change the constitution so he could remain in power for as long as he wanted to. ACORN, I’m sure, is taking notes.

This is the man that the OAS, the UN, and the Obama State Department want the Honduran people to reinstall as their leader.

The Communist Party USA is mobilizing members on Zelaya’s behalf. Here’s The People’s Weekly, paraphrasing Obama’s words when he stated the obvious fact that Zelaya was”Democratically elected” after the crisis erupted:

The situation in Honduras may be coming to a head, as today is what may be the last mediation session in Costa Rica. The people on the streets of Honduras are staying strong and mobilized in support of the return of president Zelaya.

One of the tactics which should be supported here in the US is a House of Representatives Resolution, H Res 630, calling for president Zelaya’s return. It can be read on the Thomas/Library of Congress website, at http://thomas.loc.gov. (just type in the information into the website search engine).

Everybody should be calling, faxing and writing their Congresspersons to ask them to co-sponsor and support these resolutions, which are being promoted by numerous progressive organizations including School of the Americas Watch, Latin American Working Group and others. The resolution has 21 cosponsors so far; it needs many more very quickly to have any impact. The right wing has also introduced a resolution applauding the coup.

Below is a copy of a letter I sent to my two Senators, Jim Webb and Mark Warner, asking them to sponsor a companion resolution to H Res 630 in the Senate.

I am concerned about the situation in the Republic of Honduras, where, on June 28, the military overthrew the legally elected president, Manuel Zelaya.

Unlike the practice of previous administrations, President Obama took a correct stand by recognizing the illegitimacy of the coup, and calling for President Zelaya’s return to office.

But meanwhile, we are getting reports of serious human rights violations within Honduras, while the de-facto regime installed by the coup has shown itself intransigent against demands from the OAS, the UN General Assembly and others that they return to the constitutional order. They have put out a lot of false stories and have even sent a delegation to Capitol Hill to try and get the support of your colleagues for their illegal ultra-right regime. And although I salute President Obama’s clear statement on the Honduras issue, it is also clear that the U.S. Department of Defense is continuing to support the Honduran armed forces, and various kinds of aid are going to Honduras which can only help the coup regime.

Some of your colleagues in the House have introduced a resolution, H Res 630, that I believe expresses a very correct position toward the situation in Honduras. It calls, among other things, for a cutoff of military and other non-humanitarian aid to the coup regime headed by Roberto Micheletti until the latter steps down and President Zelaya is returned to office.

As a Virginia voter and taxpayer, I would like to ask you to introduce a similar resolution in the Senate, or to support such a resolution if another of your colleagues should introduce it.

We know he was elected legally, numbskulls. It’s everything he did and was trying to do afterwards that was the problem.