CA Rep Darrell Issa, the ranking Republican on the House Committee on Oversight and Government Reform, released a report, Thursday afternoon, accusing ACORN of fraudulent activities and widespread corruption, calling for a criminal investigation into the  group. A PDF file of the report can be found, here.

Issa discussed the report on The Glenn Beck Show, Thursday:

The executive summary of the report says ACORN provided contributions of financial and personnel resources to indicted former Illinois Gov. Rod Blagojevich, Ohio Sen. Sherrod Brown and candidate Obama, among others, in what the report calls a scheme to use taxpayer money to support a partisan political agenda, which would be a clear violation of numerous tax and election laws.

“Both structurally and operationally, ACORN hides behind a paper wall of nonprofit corporate protections to conceal a criminal conspiracy on the part of its directors, to launder federal money in order to pursue a partisan agenda and to manipulate the American electorate,” an executive summary of the report reads.

ACORN, which was sent a copy of the executive summary by FOXNews.com, dismissed the report as a “partisan attack job.”

“We are busy fighting to stop the foreclosure crisis, to win quality affordable health care for all Americans and to build a stronger economy for working families, so we haven’t had the opportunity to read Rep. Issa’s screed at length,” Bertha Lewis, CEO of ACORN, said in a written statement to FOXNews.com.

“But an initial review indicates that the document is a recycled and repackaged partisan attack job on ACORN’s good work,” she added.

The report accuses ACORN, after receiving more than $53 million in federal funds since 1994, of blurring the legal distinctions among 361 tax-exempt and non-exempt entities to divert that money into partisan political activities.

Evidence found in the report relies in part on documents provided by former ACORN employees.

“Operationally, ACORN is a shell game played in 120 cities, 43 states and the District of Columbia through a complex structure designed to conceal illegal activities, to use taxpayer and tax-exempt dollars for partisan political purposes, and to distract investigators,” the report read.

“Structurally, ACORN is a chess game in which senior management is shielded from accountability by multiple layers of volunteers and compensated employees who serve as pawns to take the fall for every bad act.”

“We stand by the findings of the report,” he (Issa) told FOXNews.com. “There are a lot of legitimate questions raised about the political activities and organizational structure of ACORN. We’d certainly like to have a venue and platform for ACORN to respond to our report.”

In his statement, Issa said, “It is outrageous that ACORN will be rewarded for its criminal acts by taxpayer money in the stimulus and is being asked to help with the U.S. census. This report shines a light on clear criminal conduct and it is abundantly clear that they cannot and should not be trusted with taxpayer dollars.”

It would be up to the chairman of the oversight panel to hold hearings on the ACORN report and up to the Justice Department to pursue a criminal investigation. Likewise, the census director will determine whether ACORN remains a partner with the U.S. Census Bureau to assist with the recruitment of the 1.4 million temporary workers needed to go door-to-door to count every person in the United States.

A spokeswoman for Rep. Edolphus Towns, chairman of the House Oversight Committee, did not respond to e-mails seeking comment.

Gateway Pundit covered the rent a mob rallying for single payer health care in front of Claire McCaskill’s office in St. Louis, yesterday. Checkout the the pre-printed signs – your tax dollars at work: 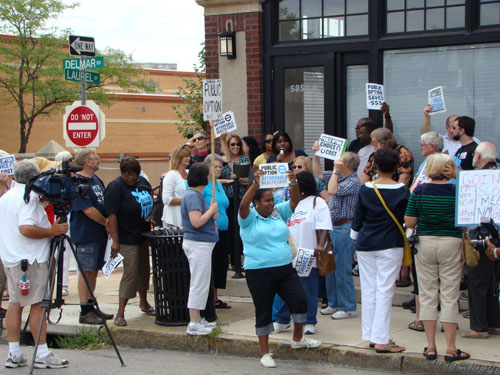 Perhaps heeding Michelle Malkin’s call to counter-protest the ObamaCare and ACORN/SEIU mob, some tea partiers showed up with their own hand made signs, and demonstrated across the street. See Gateway Pundit for full report.

Cap And Tax Would Fund ACORN?

BREAKING!: Obama Has “Curiously Close Labor Friendship” With SEIU According To LA Times

The Latest On The AmeriCorps Scandal

ACORN Is A Criminal Enterprise

Michelle Bachmann And Bawney Fwank Duke It Out Over ACORN

Are Former SDS Radicals Trying To Steal This Election?