What makes it all the more poignant is that it was put together by a high school kid. This is from the information provided on YouTube:

This resulted from a Mom in Alabama asking her high school son to help with a commercial for the Tea Party she was involved in organizing. Boy, does it slam the message home. Very impressive.
Here is her note:
“I asked Justin if he could help me make a commercial for my group’s Tea Party. He sat down at the laptop for about an hour, and then brought this to me and asked, ‘is this okay, Mom?’ After I finished watching it, my stomach was in my throat.
Everyone that I have sent it to has really enjoyed it, so I wanted my friends to see it. I am so proud!”
A very powerful video…turn up the sound & sit back…!!!

Michelle Malkin appeared on The View to promote her new book, Culture of Corruption; Obama and his Team of Tax Cheats, Crooks and Cronies.

She left the three liberal harpies babbling …”but but but – wasn’t the Bush administration corrupt, too?”, and as Michelle would later quip, “You know you’ve won the argument when the ladies of the View are reduced to arguing how corrupt Team Obama is, and not whether”.

The video, courtesy of Hot Air:

The Anchoress was “surprised at how tame the gals seem around Malkin”, and I would agree….no doubt they were well aware that they were encountering a determined firebrand who was in full command of the facts, (unlike themselves).

But at least they were willing to have her on to discuss the book.

Unlike  the intellectually dishonest Bill Maher, who held the book up to ridicule and scorn, without actually confronting any of the points made within its 400+ pages:

Maher sneers that Obama has only been in office six months.

Hey, Einstein: That. Is. The. Freaking. Point.

You know, I get the impression that Bill Maher isn’t all that terribly bright.

Later on, Michelle appeared on the Glenn Beck Show, where they focused on Obama’s czars:

Thanks to Glenn Beck Clips.

Greta Van Susteren covered the Ohio tea party on her show, tonight, and interviewed one of the organizers, Jason Rink: 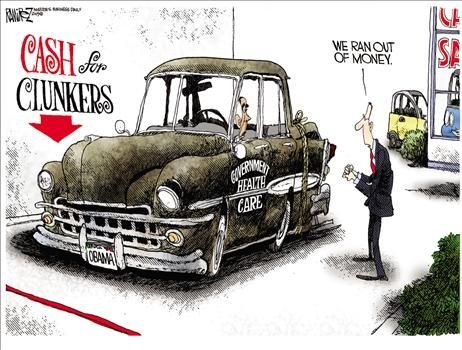 Via: Steven Laboe’s  – Political Cartoons of the Day

The grandiose plans to overhaul our entire health care system, he says, are dead. Thanks mostly to the CBO’s repeated reality checks:

Three blows: (1) On June 16, the CBO determined that the Senate Finance Committee bill would cost $1.6 trillion over 10 years, delivering a sticker shock that was near fatal.

2) Five weeks later, the CBO gave its verdict on the Independent Medicare Advisory Council, Dr. Obama’s latest miracle cure, conjured up at the last minute to save Obamacare from fiscal ruin, and consisting of a committee of medical experts highly empowered to make Medicare cuts.

The CBO said that IMAC would do nothing, trimming costs by perhaps 0.2 percent. A 0.2 percent cut is not a solution; it’s a punch line.

(3) The final blow came last Sunday when the CBO euthanized the Obama “out years” myth. The administration’s argument had been: Sure, Obamacare will initially increase costs and deficits. But it pays for itself in the long run because it bends the curve downward in coming decades.

The CBO put in writing the obvious: In its second decade, Obamacare significantly bends the curve upward — increasing deficits even more than in the first decade.

Then there was Obama’s unconvincing July 24th press conference, and the popular revolt against ObamaCare. The White House exposed the “farcical nature of its frantic and futile cost-cutting”  when budget director Peter Orszag held a three-hour brainstorming session with Senate Finance Committee aides trying to find ways to save”:

“At one point,” reports The Wall Street Journal, “they flipped through the tax code, looking for ideas.” Looking for ideas? Months into the president’s health-care drive and just days before his deadline for Congress to pass real legislation? You gonna give this gang the power to remake one-sixth of the U.S. economy?

What this all amounts to is an epic FAIL in the attempt to overhaul the entire U.S. health-care system. Thank God. We can stop hyperventilating.

…the president will, in the end, simply impose heavy regulations on the insurance companies that will make what you already have secure, portable and imperishable: no policy cancellations, no pre-existing condition requirements, perhaps even a cap on out-of-pocket expenses.

To pay for this, they will have to force 18 million Americans between 18 and 24 to buy health insurance, which, no doubt, they’ll sell as much needed preventative care.

So no big surprise, the big government fix would lead to a decrease in personal liberties, but  would be nowhere near as bad as it could have been, and the Obamessiah will get full credit for a huge legislative success.

A question. How would the health insurance reform compromise handle illegal immigrants? We probably don’t want to hear the answer to that.

Are the Dems still trying to push through their plan with dwindling public support?