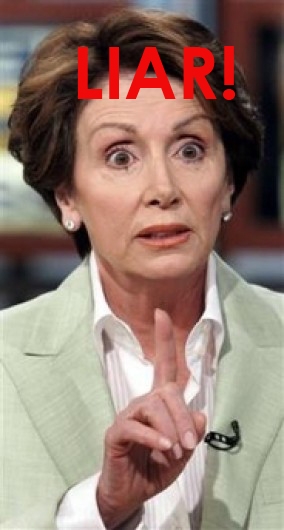 The newly released CIA documents not only proved that Dick Cheney was right about the EITs saving lives. They also confirm what we strongly suspected.

Nancy Pelosi is a  liar:

The IG report belies House Speaker Nancy Pelosi’s claims that she wasn’t told about all this. “In the fall of 2002, the Agency briefed the leadership of the Congressional Intelligence Oversight Committees on the use of both standard techniques and EITs. . . . Representatives . . . continued to brief the leadership of the Intelligence Oversight Committees on the use of EITs and detentions in February and March 2003. The [CIA] General Counsel says that none of the participants expressed any concern about the techniques or the Program . . . .” Ditto in September 2003.

This is the scandal Eric Holder should be investigating, not the CIA, who worked to keep us safe for eight years.

I think Dennis Miller spoke for many of us when he called her a vapid, insipid, empty headed, and nasty piece of work on The O’Reilly Factor:

The Truth Comes Out: Nancy Pelosi Knew about The Waterboarding

Video: What Did The Speaker Know And When Did She Know It?

Laugh through the tears:

How come I’ve never heard of this guy, Tim Hawkins? Here’s another random selection of his work: 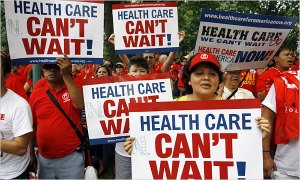 What to look for

OFA has launched its own bus tour to counter the anti-ObamaCare bus tours that are currently making their ways across the country. Conservative activists take heed. There is not an easily accessible schedule posted online of the 11 stops the bus plans to make. The reason for this should be obvious. They want their people at these rallies, not you.

The “Health Insurance Reform Now” bus will make 11 stops between tomorrow and when members of Congress return to Washington, hitting up Albuquerque, N.M., Denver, Raleigh, N.C., and Pittsburgh.

The president’s supporters seem to have been drowned out when it comes to healthcare reform, with activists on the right flocking to healthcare town halls around the country and getting a lot of attention for doing so. Conservatives already have a bus, too, the “Hands Off My Healthcare” bus, created by the conservative group Americans for Prosperity. It has toured the country for several weeks, this week stopping in Arkansas.

I suggest that  conservative activists continue to drown out their voices by “flocking” to these pro ObamaCare rallies wherever possible. I went to the OFA website for a schedule, but, believe it or not, was unable to find one. I was able to track down three of the stops by scouring the internet:

More cities were mentioned in this article:

Organizing for America plans a bus tour beginning Wednesday in cities including Phoenix, Albuquerque, N.M., Denver, Des Moines, Iowa, Pittsburgh, Raleigh, N.C., and Milwaukee. The bus will make 11 stops between Wednesday and Sept. 3. Some 2,000 events are planned around the country through Labor Day, according to Democratic National Committee spokeswoman Brandi Hoffine. The wide range of events include phone bank calling and rallies. “We want our members of Congress to head back to Washington with calls for reform still ringing in their ears — and knowing that those who are working hard for reform have our thanks,” said an e-mail sent by Organizing for America inviting supporters to bus tour events. “But we can’t do it without a massive show of support from the voters who know what’s at stake.”

Deborah Johns, Vice Chair of the Our Country Deserves Better Committee, the organizer of the Tea Party Express issued this statement:

“It is not surprising that Barack Obama’s supporters feel the need to hold a bus tour to counter the “Tea Party Express” – given the outpouring of support the Tea Party Express tour has received before we’ve even logged one mile of our tour “This Friday the Tea Party Express will embark on a nearly 7,000-mile journey across the country holding tea party rallies in 34 cities.  This effort marks a ramping up of the tea party movement which has shown a passion of the American people to speak out against the errant ways of their government.

“Barack Obama and his supporters believe that if they simply attempt to replicate the Tea Party Express that they can counter this powerful tea party movement.”While we will be traveling nearly 7,000 miles across the country and rallying Americans in 34 cities, they will be holding made-for-television rallies in just 11 cities.  It’s just the latest example of the Obama administration’s obsession with style over substance.

The schedule for Americans For Prosperity’s “Hands Off My Health Care”  bus tour, is right here.

Let’s try to make it to as many of these events as possible.

Health Care for America Now is holding a “Health Care Can’t Wait Rally” at Dennis Moore’s office, 5th & Minnesota Ave, next Wednesday, 9/2/09, from 6pm-7pm.
We are planning to be there in opposition.  It is IMPORTANT that we get as many people there as possible with our Free Market Health Care Signs.  I’ll be sending more information out in a few days.
Because there is safety in numbers, we will be announcing a location for us to meet up prior to driving to his office.