This gave me my laugh of the day. How humor impaired is the CA Democrat party? Check out what has given them the vapors:

Of course, the commentary accompanying the video on YouTube doesn’t help matters:

Here’s some of the fund raising letter sent out by the CA Dummicrat party:

Members of Congress around the country have held some heated town hall events this month. But the rhetoric went above and beyond at a recent town hall meeting held by Republican Rep. Wally Herger.
At the meeting in Redding, a man stood up and identified himself as “a proud right-wing terrorist.” Instead of denouncing him, Congressman Herger called the man “a great American.”

That’s outrageous –which is why the California Democratic Party is buying newspaper ads next week in the Mt. Shasta Herald and the Redding Searchlight, demanding that Herger apologize and repudiate right-wing terrorism.

For a scathing and scatological response to these doofuses, see Misha at Anti-Idiotarion Rottweiler.

Some People You Just Can’t Reach…

Here are some  pictures of right wing extremists from tea parties across the nation. 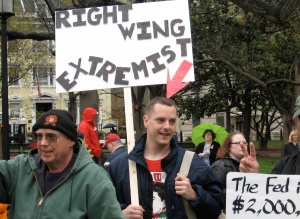 Good God, he even has the Timothy McVeigh military style haircut 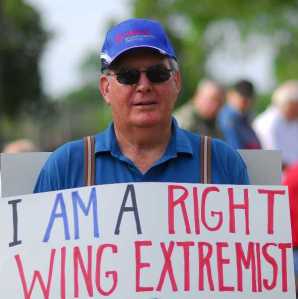 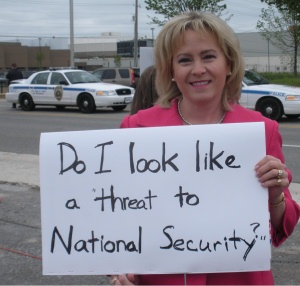 Yes, you do lady, now put down your sign, and let the CA Dem party catch their breath. 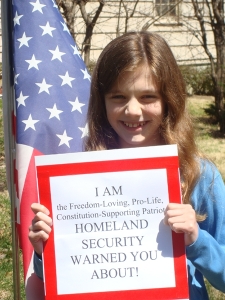 Always on the cutting edge of stupid, MSNBC’s uberdork Keef Olbermann made Rep.  Herger his “Worst Person of the World”, last week, ranting that Herger was bound by oath to uphold the Constitution, dammit!

And if some buffoon in his audience calls himself a terrorist, he is minimally required to remind him what that means…and how many Americans have died at the hands of terrorists, and you have to tell them to shut the hell up until he can come close to living up to what you told everybody in that crowd when that little FASCIST rally started, they have to respect each other’s opinions. (*irony meter explosion*) And if you can’t Congressman Herger, you’re not entitled to serve as Redding’s DOG CATCHER – let alone to be in the House of Representatives.

Congressman Wally (a right wing terrorist is a great American) Herger, of the CA 2nd, today’s Worst Person in the World!!1111!!1!!

They didn’t teach the Constitution at that Ag college he went to, did they?

Via American Power, here’s a harrowing photo from  one of this weekend’s tea parties in Nevada: 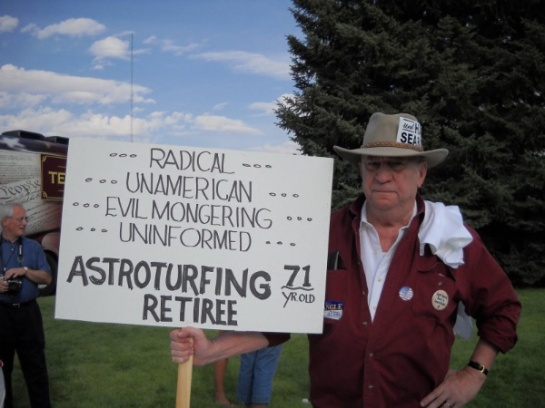 Good grief!!! Could someone who has read the Constitution PLEASE EXPLAIN TO THIS FASCIST that he needs to “shut the hell up” because thousands of Americans have died at the hands of radicals?!

THE RECLAMATION OF INDEPENDENCE

Free Citizen of the United States of America,

WHEN IN THE GENERATIONS  SUCCEEDING the one that pledged their lives, their fortunes, and their sacred honor to usher in the birth of the world’s only truly free nation, Liberty’s Progeny incrementally ceded their birthright to the government conceived and designed to serve a free people, and not be its servant, this generation is awakening to the terrible mistake that we, and our ancestors allowed to happen.  Charged with the terrible knowledge that comes with opened eyes, we now take up the long abdicated duty to rouse our fellow citizens and actively wrest the power and the liberties that have been progressively talked, cajoled, threatened, wheedled, and extorted from us, not only by those who ostensibly served us, but by their supporters and enablers who, by accident or design, saw fit to usurp and disdain such freedoms, that they might be withheld, and where impossible to withhold, might be condemned, until a corrosive contempt for these liberties, wrapped in velvet gloves, might so suffocate the circulation of them that this nation, conceived in liberty and the providence of a wise and benevolent creator, might indeed perish from the earth, plunging the rightful heirs of a proud and noble heritage in the the darkened waters of chaos, despair, and evil that surround them, a dank deluge that even today, other human beings actively seek to escape from in the inspiring embrace of this blessed and free country.

We, the awakened and aware, freely accept the charge that the architects of this republic passed on to us over two centuries before, in the hope that all who partook in the blessings made possible by nation they created would somberly undertake the duties of citizens, and so appropriately train themselves in virtue, and educate themselves in the workings of the precepts and ideals set forth in their foundational documents that they would possess enough wisdom to recognize that not all threats to our freedom would come from without our ranks, the knowledge to recognize that not every chain and shackle menacing us will immediately appear to be what it actually is, and the humilitynot to assume that the ingenuity and innovation that has been the hallmark of American success has been the product of man alone.

To this end, we hereby identify and reclaim our independence from the tools used to slowly enslave a free people and usurp the freedoms that we could not be persuaded to freely give up, or voluntarily suppress the free exercise of on our own:

Read the seven terms of the Reclamation by the author, here.

In case you missed this earlier this morning:

If you thought, as I did, that the Obama administration was backing off its threats to punish the tiny nation of Honduras for ousting would be dictator, Manuel Zelaya, you would be wrong. The Obama administration is dead set against taking any actions that don’t shock and demoralize the senses of freedom loving people everywhere.

Hans Bader of The Examiner reports:

Both actions are foolish responses to a recent ruling by the supreme court of Honduras refusing to approve the return to power of the country’s bullying ex-president and would-be dictator, Mel Zelaya. Zelaya was earlier arrested by soldiers acting on orders of the Honduras Supreme Court, replaced by his country’s Congress with a civilian successor, and forced into exile. Zelaya’s removal came after he systematically abused his powers: he sought to circumvent constitutional term limits, used mobs to intimidate his critics, threatened public employees with termination if they refused to help him violate the Constitution, engaged in massive corruption, illegally cut off public funds to local governments whose leaders refused to back his quest for more power, denied basic government services to his critics, refused to enforce dozens of laws passed by Congress, and spent the country into virtual bankruptcy, refusing to submit a budget so that he could illegally spend public funds on his cronies.

State Department lawyers, who are not experts on Honduran law, plan to declare the ex-president’s removal a “military coup” to justify cutting off aid, even though Honduras has a civilian president, and the ex-president was lawfully removed from office (although his subsequent exile may technically have violated Honduran law).

Journalists nonsensically refer to Honduras’s removal of its ex-president as a “coup” even while admitting that it was ordered by the country’s supreme court. But if it was legal, by definition, it cannot be a coup, since a coup is defined as “the unconstitutional overthrow of a legitimate government by a small group.”

Even as Obama’s actions are supported by his ideological brethren, the Cuban communist dictator Castro and the Venezuelan socialist dictator Chavez, they have not shown him any love for throwing Honduras under the bus:

The dictators Castro and Chavez continue to attack and oppose the United States at every turn, and oppose all of its Latin American initiatives, like its plans for bases in Colombia to fight drug trafficking. Obama has received nothing in exchange for his appeasement of Latin America’s left. 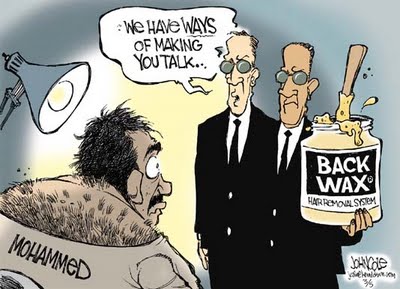 Not that under Obama, the CIA would be allowed to do such a thing.

Via Don Surber, who offers commentary on the Washington Post article that finally admitted the obvious; that the “torture” worked.