Calling her “The Blind Leading The Blind”, Media Matters(not) blogger extraordinaire, Eric Boehlert spends a whole post laughing at Michelle Malkin, and the gullible wingnuts who repeated her “bogus claim” that 2 million protesters showed up on the Washington mall, yesterday for the 9/12 tea party. The 2 million number was quickly retracted by Malkin, when ABC denied reporting that figure, but it is closer to the mark than the 60,000 to 70,000 number they subsequently reported.

Boehlert makes no attempt to estimate the actual crowd size, himself, but he does offer this picture, which looks like it was taken way after the march had wound down, and most people had gone home:

It compares less than favorably to the Obama inauguration picture, does it not? I mean, wow.

Now…why would a group that calls itself “Media Matters” ostensibly because it points out misinformation, disinformation, and lies in the media, choose to use an obviously bogus photo of the 9/12 DC tea party and  compare it to Obama’s inauguration?

Why not use this picture:

Instapundit: Mary Katharine Ham emailed this pic from the Newseum balcony in DC 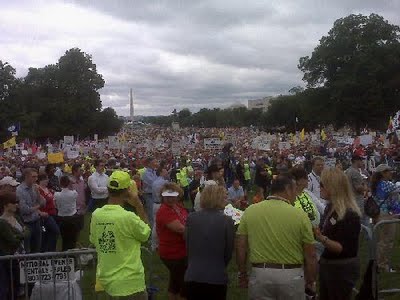 None of those pictures fit the left’s narrative that the showing was unimpressive, that’s why.

Apparently, some in the nutroots are even trying to argue that the screenshot of the 9/12 march taken from a livecam of the event is somehow “fake.” Sad.

You can view CSPAN’s  2 &1/2 hours of live coverage of the march on Washington, here.

It’s almost as if the Soros brigades are in desperate spin mode, here, trying to convince their brain dead, troglodyte  followers that nothing of import happened in DC, yesterday. It was  just a small group of racist teabaggers with their shocking, shocking signs, instead of very large number of Americans who represent an even larger number (perhaps majority)  of Americans who are fed up with what the Obama administration, and  Congress have been cramming down their throats since January 20th.

*Incidentally, the crowd size is estimated to have been well over one million based on USA Today’s method of estimating crowd size, which was used for Obama’s inauguration:

Moderate in the Middle concludes:

MSNBC screen cap of the 912 march, CLEARLY the crowd stretched out beyond the 1 mill point based on USAToday’s report on how to gauge inaugural attendance!

See Moderate in the Middle for even more photos from the march.

It’s been pointed out that the USA Today graphic is for The Mall, a large park that extends out from the capitol. The contrasting photo of the march is down Pennsylvania Ave., which is narrower.

The Examiner reported that DC police had estimated the crowd to be around 1.2 million.

Liberals are filthy pigs who expect others to clean up after them.

Conservatives respect their surroundings. Littering is so tacky.

R.S. McCain, who was there, has a good report on the size of the crowd:

What I’m getting at is that, throughout the afternoon, there was a continuous process of people leaving and arriving in the main rally area for various reasons. Barbara Espinosa, to cite one example known to me directly, ran down her cell-phone batteries sending photos to Steve Green and left the rally sometime after 2 p.m.

Furthermore, as I noticed when I went down to the police barricade toward the southeast side of the Capitol lawn to try to locate Cynthia Yockey, many people were wandering around on the periphery of rally. Dan Riehl arrived late, and could give an account of how many late arrivals were hindered by jammed inbound roads and the snarled-up Metro system.

All of which is to say that any given photo of the mall, taken at any time during the rally, could not possibly have shown the total crowd that attended the rally over the course of the event. Given the 450,000 number counted along the parade route, I have no problem believing that the total attendance was in excess of 1 million, but beyond that I am unwilling to hazard an estimate.

*The authenticity of the last picture I had posted was called into question, so I removed it. I’ve contacted the source to verify its legitimacy.