Ace and Gabe were wondering the same thing I’ve been wondering:

Oversold? Gabe tips me that in the Senate they slipped the amendment into a HUD bill that didn’t provide any money for ACORN. So I don’t know that these amendments apply to all other spending or just the spending in the bill — in the latter case, may be of very limited usefulness, except forcing Democrats to admit by their votes ACORN should be defunded when a bill that actually affects them comes up.

I do not know. I am more ignorant than usual.

A Moron Answering a Question:

Gabe asked me: Question: In your latest post, what does “de-fund” mean? Does it just block all current appropriations directed to ACORN or does the bill say (as was threatened) that they can never receive federal funds again?

I wasn’t sure if it was quite time to celebrate after the Senate HUD bill, passed, myself. ACORN and its affiliates have many ways of obtaining federal dollars, but it sounds like the Republicans are crossing all Ts and dotting all their Is.

Nebraska Republican Sen. Mike Johanns, who sponsored the successful amendment to ban federal housing funds from going to ACORN, has introduced the same amendment banning funds for ACORN in two other appropriations bills: the Interior Department appropriations measure and the Commerce, Justice, and Science appropriations bill. Johanns is expected to take to the Senate floor today to argue in favor of banning ACORN from those areas of federal spending.

In the new amendments, Johanns is attempting to bar federal funding for ACORN at some departments that currently do not send any money to the organization. The idea is to make sure that federal funds for ACORN, once banned from the Housing appropriations bill, do not find their way into other parts of the federal budget. GOP Senate aides point out that ACORN is connected to hundreds of different organizations across the country, and it will take a lot of work to make sure federal dollars do not go to ACORN or its affiliates. “They have tentacles everywhere,” says one aide.

Still in the works is a larger, standalone bill that would bar all federal funding for ACORN. Republicans in the House have already introduced such a measure.

Michelle Malkin says this is “Just the beginning. Far from the end”.

But it’s a great beginning.

Skip ahead to 53 seconds in:

“Angry mob”, “racists”, “extremists”, “unAmerican”, “right-wing terrorists”, “astroturf”, and did I mention “racists”? Especially racists. All these words are being used to describe opponents of Obama’s policies, and sadly, not just by the ignorant troglodytes of the left-wing blogosphere, but by leaders of the Democrat party.

At the moment, we are seeing an uptick in accusations of racism. While the President pretends to stand above it all, everyone from Jimmy Carter to Maureen Dowd, to Maxine Waters to Janeane Garofalo are flagrantly employing the race card. Why? It seems that the more unpopular Obama’s policies get, the more the card gets used.

Rush Limbaugh just quoted the NYTs article  on his show: As Race Debate Grows, Obama Steers Clear of It: “B.S.”! , he says, the Obama administration is behind it!

We can’t really say that for sure, but we can point out that we saw the same tactic used during the campaign. 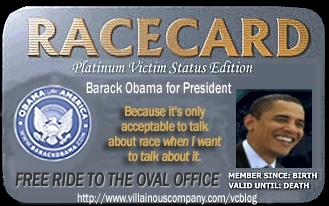 It was used quite effectively against the Clintons, and let’s not forget this oft repeated, groan inducing line he used during stump speeches:

Nobody but Obama was mentioning that he was black. We were mentioning his troubling radical background, and radical, far left/communist supporters and associations. Just as we are, now. You can see this concern reflected in tea party signs like these: 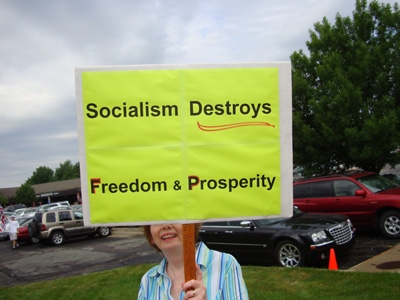 So some of the savvier race-baiters started equating the word “Socialist” with the “N word”.

I’m told denizens of lefty blogs lament that the tea party protests get more attention in the media than their protests did. Yes, seriously.

Never mind that it took only a small handful Code Pink crones to bring out a media stampede of sympathetic coverage wherever they went. Never mind that now that Obama is the President, their puny protests are no longer covered. The media  covered left wing protests extensively, and studiously avoided covering them in a negative light. Literally hundreds of tea parties have taken place since Obama took office, and most have been  ignored. The tea parties that have been covered have been subject to scathing criticism.

Members of the left-wing media (we no longer call them MSM) go out of their way to seek out the more extreme members of conservative protests, and then those are often grossly mischaracterized as this black gun aficionado was on MSNBC.

Tea party critics in the media are appalled by the Obama/Hitler comparisons which are done primarily by Democrat Lyndon LaRouche supporters.

Where were these critics during the Bush years, when Bush was compared to Hitler on an almost daily basis by the left? What was one of the left’s favorite nicknames for President Bush? Bushitler?

The Bush/Nazi theme was standard at all anti-Bush protests:

Where was the media when protesters’ signs reflected their demented, violent, deathwishes against the President?

I don’t remember anyone in the leftwing media having much to say about the hardcore extremism on display at anti-Bush protests.

But they are working overtime to portray Obama’s opponents as racists.

Charles Krauthammer called it “the last refuge of the liberal scoundrel”.

Baldilocks calls it an “all purpose cudgel” :

I would say that those who hurl the racism epithet toward critics of President Obama don’t expect the charge to make sense. Sense isn’t necessary due to the fact that the racist label has become such an effective destroyer of careers and reputations in the last thirty-five years, the accusers expect the charge to have the same power that it has had over that time period. It’s the Tar Baby of tar babies, ironically enough, and woe to the white human being who is unfortunate enough to be stuck to it.

For the sycophants of President Obama specifically, crying racism has become an easy way to avoid addressing  his long-articulated leftism, his incipient fascism, his lawlessness, his mendaciousness and his general executive incompetence his studied indifference toward adhering to proven executive practices, even his own stated methods.

But what happens when the weapon is used too much?

Victor Davis Hansen believes this ploy will result in another 5% drop in the polls for Obama:

In the wake of Joe Wilson’s crude outburst, many network commentators (and Jimmy Carter, of course) are weighing in on the new racism that supposedly explains 1) rising opposition to Obamacare and 2) the president’s sinking polls. I think this is a disastrous political move to save a health-care plan that simply has not appealed to a majority of Americans. I suspect it will result in another 5-point poll slide.

To prove their charge, those who allege racism would have to show empirically that the present angry rhetoric eclipses what was said about and done to Bush. It does not yet.

We don’t see the word “hate” used in mainstream publications like The New Republic and the Guardian, as it was during the Bush years. (Even worse, really unspeakable things were done to Bush in novels and films.) “You lie” is about on par with the past statements of a Rep. Pete Stark or a Howard Dean (“I hate Republicans”), or the booing Democrats at the 2005 State of the Union. The extremists at the demonstrations are in smaller numbers so far than those who turned out against Bush and the Iraq War. A senior figure like John Glenn or Al Gore has not called the current president a Nazi or brownshirt.

Rasmussen reports that only 12% of Americans believe that racism is behind the opposition to Obama. But that won’t stop the Obamanuts from using the race card.

In case you missed this, last night: