Obama Had an Afghanistan Strategy Before He Didn’t Have One:

“I suppose because he’s spending all this time preparing for Letterman, and speeches to school children that he hasn’t been able to focus on a war in which our soldiers are in the field getting shot at, and as the President himself is saying…without a strategy”!

Thanks to The Right Scoop.

Glenn Fine, the Inspector General of the Department of Justice today wrote to the Chairman and Ranking Republican of the House Judiciary Committee – Reps. John Conyers, D-Mich., and Lamar Smith, R-Texas — informing them that his office is planning on opening a review into whether ACORN applied for or received any Justice Department grants or funds and whether or not the Justice Department ever carried out any audits or reviews of those funds.

You can read the letter HERE.

In a statement, Smith said that the IG’s report “will help Congress ensure that money allocated to support law enforcement efforts is not instead used to support criminal conduct. It is clear that ACORN has fostered a culture of corruption. With investigations of ACORN now occurring in 20 states, it is time for the FBI to open up a full scale investigation into possible criminal conduct by ACORN.”

I don’t get it…Why all the fuss about something that is “not an important issue facing the country”?

Michelle Malkin says: Keep these IGs in your prayers. Watchdogs are an endangered species in the Age of Obama. 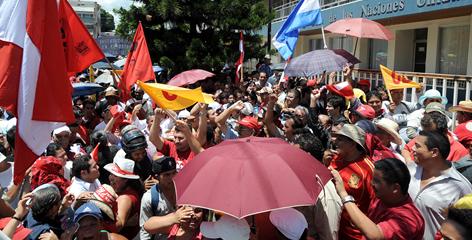 Supporters of ousted Honduran President Manuel Zelaya celebrate his return to the county in front of the United Nations offices on Monday.

Strange…those red flags don’t look like Honduran flags, do they?

The latest hi-jinks from Chavez and Zelaya:

“He traveled for two days, through rivers and mountains and risking his life,” Mr. Chavez said.

Initial news reports placed Mr. Zelaya and his wife in a U.N. building in Tegucigalpa, the Honduran capital, although Mr. Zelaya later confirmed reports he was at the Brazilian embassy.

“I’m here in the Honduran capital,” Mr. Zelaya told Telesur. “I’m here to initiate dialogue,” he added. Television images showed hundreds of Zelaya supporters gathering in front of a U.N. building in Tegucigalpa to celebrate his return, while riot police tried to control the crowd.

If he’s actually there, and Honduran authorities find him, he may wind up “initiating dialogue” from jail.

Oh, he’s there all right…taking refuge at the Brazilian Embassy:

Ousted President Manuel Zelaya returned to Honduras on Monday almost three months after he was toppled in a coup, and took refuge in the Brazilian embassy in the capital to avoid arrest.

Reuters photographer Edgar Garrido saw Zelaya with aides and his wife in the embassy, and the leftist president gave media interviews from inside the building.

Well, I hope he’s comfortable. He may be hanging out there for awhile.

Since the dawn of the American experiment, the American cause has been freedom and in that cause America has never been silent.

In light of our proud national tradition of supporting the spread of freedom, rule of law and democratic institutions around the world, I am disappointed that the President and his Secretary of State have devoted so much effort to undermining democracy in Honduras.  The President should be supporting the legitimate authorities in Honduras as they work to preserve self-determination in their country rather than aligning himself with virulently anti-American foreign leaders like Hugo Chavez, the Castro brothers and Daniel Ortega.

Not only has the U.S. State Department announced that it will not recognize the upcoming elections in Honduras over the objections of the four leading presidential candidates, but it revoked the visas of Honduran government officials who were invited by Members of Congress to come and brief them on the ongoing situation in Honduras.

These policies do not measure up to the best traditions of our democracy and send precisely the wrong message to those who are fighting for freedom in Honduras and around the world.

I urge the Secretary of State to reverse this harmful course of action, drop the insistence on restoring Zelaya to power despite his unconstitutional efforts to seek a second term, restore the visas of Honduran government officials, and support those officials working for free and fair elections in Honduras.

Could George Soros Be Behind The Obama Administration’s Disgraceful Treatment Of Honduras? 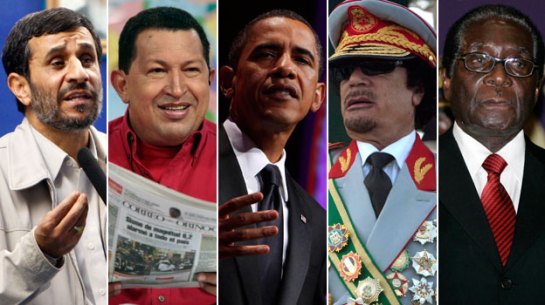 Baldilocks calls them a “colorful cast of characters” as she frets about Obama presiding over the meeting of the Security Council on the 24th, the first time in the history that a US President has done so.

I shudder to think what might be on his agenda for that meeting.

As the U.S. rolls out the welcome mat for this motley crew, one  Latin American leader is compelled to stay home because the Obama State Dept. took away his visa:

The United States has attacked Honduran autonomy with bullying tactics. Washington recently stood by as Honduras was hectored out of the United Nations Human Rights Council by Cuba and Nicaragua, and current Honduran President Roberto Micheletti said he would not attempt to travel to New York to attend the upcoming meeting of the U.N. General Assembly because his U.S. visa was revoked. All the while, Iranian President Mahmoud Ahmadinejad – who heads a government that is among the world’s most odious human rights abusers – is being welcomed to the city to spread his message of hope and change.

Front and center of these latest revelations is Buffy (the Walmart slayer) Wicks, Deputy Director of the White House Office of Public Engagement. 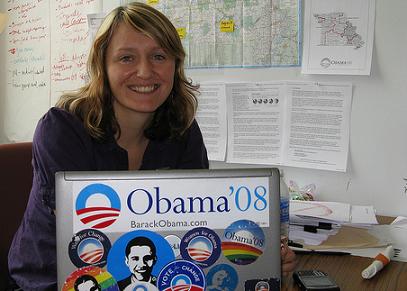 Among other things, the audios will reveal Buffy saying:

See Big Government for the whole explosive report, and tune in to Rush Limbaugh, as this is his top story on his show, today.

Any laws broken here? Slublog at AoSHQ thinks the Hatch Act may have been.

Leave it to Obama to  flagrantly exploit an agency already sympathetic to his agenda.

I used to wonder why Obama never said anything to discourage the embarrassing and unseemly sycophantic cult worship that was so often expressed on his behalf for the past couple of years. Even I wouldn’t have guessed that it was being orchestrated  from campaign headquarters, and now the White House itself.

Buffy the Walmart Slayer thanked all the participants who were in on the call, which included the Winner and Associates rep., which is interesting since Ethan Winner “claimed he hadn’t had contact with David Axelrod for ten years, it was all just something he felt like spending thousands of dollars on himself”.

It’s the Cover Up, Not the Crime: NEA, White House Lied About Nature of Conference Call

It was a crime, and the White House should be held accountable.

One wonders what fashion critic Richard Blackwell, known or his unforgiving  “Worst Dressed“ lists would have thought of this Obamanation:

Michelle Malkin wonders if the National Endowment for the Arts subsidized the dress.

Here are some accessories, actress Victoria Rowell might have considered: 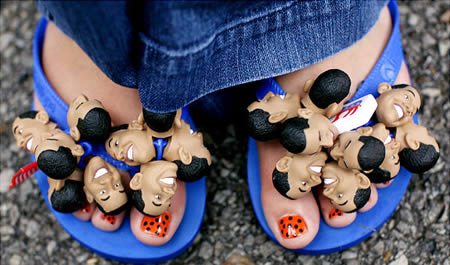 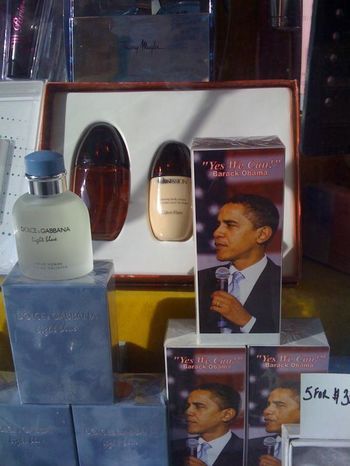 I guess she is to be applauded for keeping it subdued.

Via: Pundit and Pundette