I just got off the phone from a bloggers conference call with MI Rep Pete Hoekstra, ranking member of the Select Committee on Intelligence, who started off by mentioning that he was among the first in Congress to come out and identify the Fort Hood shooting as a terrorist act, saying there was sufficient evidence that it was a terrorist act by a home grown terrorist right from the get-go. He wants an investigation into how all of the red flags that have come out about Hasan were ignored – (how did he get good performance reviews?) and hinted that what we have heard is “only the tip of the iceberg”.

He mentioned Democratic Senator Jack Reed’s answer when asked, what if KSM is acquitted?: “We would still detain him” – which makes no sense  if we are trying to increase our standing in the world.

He characterizes the trial as “the trial of the century”.

Bill Dupray from the Patriot Room wanted to know what possible upside there was to bringing the terrorists to NY.

Hoekstra thought that was an excellent question, and could think of none. There is simply no good reason for it, politically or otherwise for the administration to be choosing this path. He mentions Chuckie Schumer’s request already for 75 million for NYC to hold the trials, right out of the box, it’s a costly enterprise.

Holder has not been able to answer adequately the reason for the decision. Senator Graham asked him if we captured Osama Bin Laden, would we put him on trial, too? Holder was not able to answer the question. (Gateway Pundit has video). These guys are not on firm footing…

Dupray asked if these defendants would receive full constitutional rights, and Hoekstra believed that they would. Asked if Dupray had heard of The John Adams Project. Dupray was not familiar with them. We need to get familiar with them. They’re a far left, anti-American group who are apparently driving much of this. (Michelle Malkin has mentioned them in a post).

Hoekstra also mentioned that there are 3 key provisions in the Patriot Act that are about to expire at the end of the year, (little over a month), and Congress has not acted on them.

Dan Riehl asked if these trials would essentially put our  intelligence apparatus on trial.

Hoekstra: AMEN…He believes KSM, with willing partner, The John Adams Project will use every opportunity to expose our intelligence apparatus, and reminds us that KSM’s first desire when captured was to be put on trial in NYC. By doing so, we will be putting him on the biggest stage in the world.

He believes a great idea for an oped in the WSJ is the question WHY?

As for GITMO detainees coming to American soil, he advises the American people to ask the “most transparent administration in history” to declassify their record so we can see for ourselves how dangerous they are.

Blogger Bill Barr wanted an assessment of the threat we face.

Hoekstra: America is target rich. Again advises Americans – give us the info Hoekstra has. Most americans when they see that info will understand why Bush kept them in gitmo.

Hoekstra also mentioned that he is retiring from Congress and running for Governor of Michigan. He will be missed in Congress. But it is Michigan’s gain.

Bill at The Patriot Room has already posted the audio from the call.

Yes, I’m having keyboard issues. I’ve been going back and correcting typos as I see them. Sorry for the inconvenience.

I got the feeling that Sessions is not in favor of civilian trials for captured terrorists…see if you come to the same conclusion:

Andy McCarthy did an epic fisking of Holder’s initial testimony and answers to the first rounds of questions, here.

This is the one that frosts me the most:

8. For eight years justice has been delayed — no longer, “It is past time to finally act.”

Holder, of course, does not mention the role of his firm and others in delaying and derailing the military commissions during their representation of America’s enemies. Senator Kyl just confronted him with my contentions on that score (from this column). The attorney-general responded that I am a polemecist who says inflammatory things for talk shows, whereas he is concerned with facts. (I guess he means pertinent facts, like how he is not “scared of KSM.”) I’m delighted to let people judge that one for themselves.

Only 30% of Americans said suspected terrorists should have access to U.S. courts.

Two-thirds of Americans disagree with the Obama administration’s decision to try Khalid Sheik Mohammed in a civilian court rather than a military court, according to a new national poll.

Obama: Don’t blame me, it wasn’t my idea:

Hear that? The majority of Americans who disagree with this, according to Obama are yahoos who are “fearful” and who believe these terrorists have “special powers” that prevent the patriots in the his justice department from presenting evidence against them.

It’s not that we simply find it Inconsistent, Indefensible, Inexplicable.

The truth is Obama has no argument at all to justify trying this unlawful enemy combatant who perpetrated war crimes against America in a civilian court designed for civilian crimes.

Baldilocks: Obama really doesn’t care  how much he and  his administration horrifies us:

Obama wants to destroy this country and, to that end, destroy or weaken the things which make this country great.  Two things which make this country great– country’s systems of jurisprudence and its due process –will be weakened by the venue alone of the trial of Khalid Sheikh Mohammed and friends.  So President Obama can be as careless about commenting on the prospective outcome of the trial as he is about every other item that is part of American Exceptionalism.

He does, however, think everyone else is stupid, as does Attorney General Eric Holder.  That’s why the two keep assuring the public that these terrorists will be “convicted and get the death penalty”.  That’s why the AG says irrelevant things about “not being scared” when questioned about the venue decision before the Senate Judiciary Committee.  The two play on the emotions of the public but never address what will happen as a result of this trial; they think that all the public cares about is hanging these terrorists.

The trial promises to be many things: an opportunity to embarrass the Bush administration and put it on trial ex-post-facto, as well as a way to appease the Left, give terrorists a bully pulpit, set some dangerous legal precedents, endanger the people of New York and cause the city to edge ever closer to bankruptcy, further neuter the CIA, and ensure that any judge and jury involved will be risking their lives for the rest of their lives. But it is also the clearest signal so far that President Obama is in fact what the craziest of right-wing nutjobs said he was long ago: a man who lied his way to the office while bent on harnessing the power of that office to undermine the country he swore an oath to protect.

Dear lord… After all of his reckless spending, he’s now worried it may lead to a double dip recession? – (And it won’t be his fault—it will be yours for not having enough “confidence” in his policies):

We tried to tell him in February (during a snow storm) his insane spending spree wouldn’t help the economy: 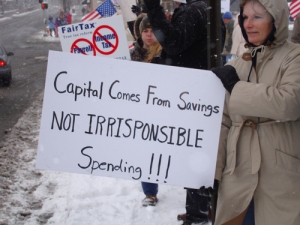 We tried to tell him in March:

We tried to tell him in April:

We tried to tell him on the 4th of July:

What were we called for our efforts?

We were targeted, blamed, and attacked for protesting policies that have led to double digit unemployment numbers, the threats of massive inflation, and “double-dip” recession?

And now we find that the many of the jobs being reported as “saved or created” are turning out to be completely bogus.

And more than 15 million people may have to repay part of Obama’s “Tax Credit”?!

And the AARP received 18 million and created 0 jobs.

He’s spending us into oblivion and running our economy into the ground while issuing “stern warnings” that this could screw us all royally?!?

Hat tip: Gateway Pundit, who reminds us what O-bow-ma was saying just a few months ago.

Ace has the headline-o- the day:

Obama: My Profligate Spending Could Lead to Double-Dip Recession, and, By the Way, You’re Welcome

Staff Sgt. Dennisur Thompson, 21st Theater Sustainment Command, overcompensates a left turn while on a driving simulator as a part of the Save a Life Tour in Kaiserslautern, Germany.

Judge Andrew Napolitano argued for and Krauthammer against not head to head, but on subsequent nights on The O’Reilly Factor. Napolitano appeared  Monday night:

The clear winner, in my estimation.