Dear lord… After all of his reckless spending, he’s now worried it may lead to a double dip recession? – (And it won’t be his fault—it will be yours for not having enough “confidence” in his policies):

We tried to tell him in February (during a snow storm) his insane spending spree wouldn’t help the economy:

We tried to tell him in March: 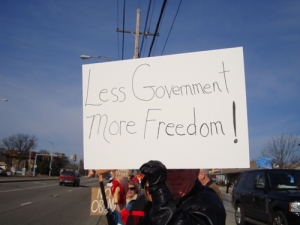 We tried to tell him in April: 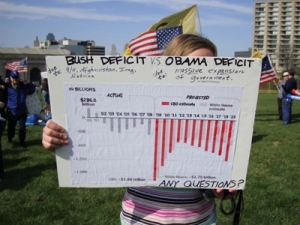 We tried to tell him on the 4th of July:

What were we called for our efforts?

We were targeted, blamed, and attacked for protesting policies that have led to double digit unemployment numbers, the threats of massive inflation, and “double-dip” recession?

And now we find that the many of the jobs being reported as “saved or created” are turning out to be completely bogus.

And more than 15 million people may have to repay part of Obama’s “Tax Credit”?!

And the AARP received 18 million and created 0 jobs.

He’s spending us into oblivion and running our economy into the ground while issuing “stern warnings” that this could screw us all royally?!?

Hat tip: Gateway Pundit, who reminds us what O-bow-ma was saying just a few months ago.

Ace has the headline-o- the day:

Obama: My Profligate Spending Could Lead to Double-Dip Recession, and, By the Way, You’re Welcome