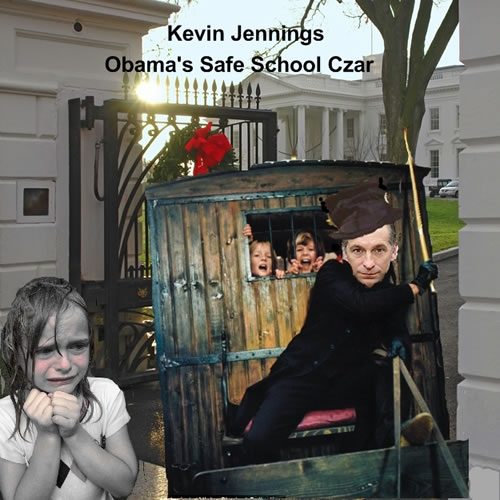 Can we  drop the pretension? Obama’s “Safe School Czar”, Kevin Jennings is no more about safe schools, than he is about firearm safety. The man is about “queering”  American schools, and Obama has just increased his budget to 410 million, an increase of 45 million over last years budget,  to help him do that.

So what does Jennings intend to do with this money?

For starters, he says he’s going to make “school climate” measurement a top priority—and, in fact, he’d love for “school climate” to eventually be made part of the “Common Core” national standards movement!  He plans to begin with “a new grant program coming out of this department where we’ll be providing possibly as much as $70 million for investments in school climate projects.”  (He revealed all this and much more in this month’s Phi Delta Kappan magazine. Scroll down to the “Safe at School” title.)

So at this point, you might be wondering, What on earth does “school climate” really mean? I think it’s best to take that definition from Kevin Jennings–based on his record as the longtime founder and leader of GLSEN (Gay, Lesbian and Straight Education Network).

Under Jennings’ leadership, GLSEN has provided students with a “school climate” continuum measurement tool.  This tool reveals a lot about Jennings’ true goals: A positively rated “inclusive school,” for instance, is defined as one where “LGBT themes are fully integrated into curricula across a variety of subject areas and grade levels.”

I.e., Jennings and GLSEN want homosexual, bisexual and transgender themes taught in every subject at every grade, all the way down to the kindergarten level, maybe even preschool.

A “hostile school,”would be one where “Curricula are devoid of LGBT themes” and homosexuality is “characterized” as “sin.”  By extension,  parents and students who oppose the radical homosexual agenda, would be in violation of the schools “safety policies”?

Recently the Obama Administration cut funding to Upward Bound, a successful educational program with a proven track record. Upward Bound provides support to participating students in their preparation for college entrance. Upward Bound serves high school students from low-income families and high school students from families in which neither parent holds a bachelor’s degree. 95% of Upward Bound graduates have entered post-secondary education and are four times more likely to earn a college degree than students from similar back-grounds who do not participate in the program. The Obama Administration will cut funding for this successful educational program.

It should also be noted that Obama and the Dems killed the successful DC private  school voucher program:

The Democrats have effectively ended the voucher program. Obama only extended it into the 2009-2010 school year. He could have done more. He didn’t. Underpriveleged children–whom the Democrats “protect” from the greed and injustices of the Right had a chance to gain the social justice and fairness Obama continuously touts in his speeches.

That’s 3,300 more children returned to the DC public schools they tried to escape – schools that may soon be pushing Jennings’ gay, cultural Marxism on the students.

Just so you know where Obama’s priorities are.

Can we please  get some more congressional Republicans, and conservative media personalities to focus on this outrage?

If your new to this story, please review the links below. Kevin Jennings and the group he formed, GLSEN, are more radical, and perverted, than you could ever imagine. This is not about being “anti gay”. It’s about opposing the pushing of a sick, twisted and perverted form of cultural Marxism on schoolkids. You can start with the GLSEN recommended reading list for students.

An Open Letter To Obama From A Mother, Re Safe School Czar Kevin Jennings

Why Does Obama Have A Known *Pervert Gay Activist (I changed my mind again)PERVERT For His “Safe Schools” Czar?