The AP reported that rally organizers said 4,000 people attended, but Capitol police estimated the crowd at 2,000 or less. Captain Ed, who was there, (and gave a rousing speech), put the crowd at 3-4 thousand. He says there were clearly more than 2000 at the rally.  His report is here.

They were not just numerous — the largest rally I’ve personally attended at this venue — but also enthusiastic.  Some got a little overly enthusiastic, such as the few who brought actual pitchforks.  (They were asked to step to the back of the crowd.)  Almost every sign carried to the rally was homemade, as you can see from the pictures.  They all came out to the capital on a day where the temperature didn’t get above 40 degrees during the entire rally, and where a cold wind blew across the mall.

I found some pictures at The Reactionaries Speak of the actual pitchforks: 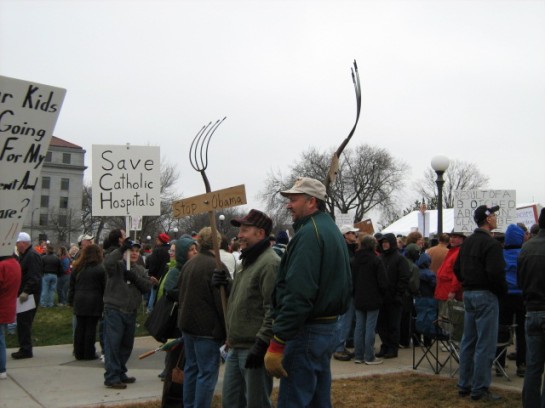 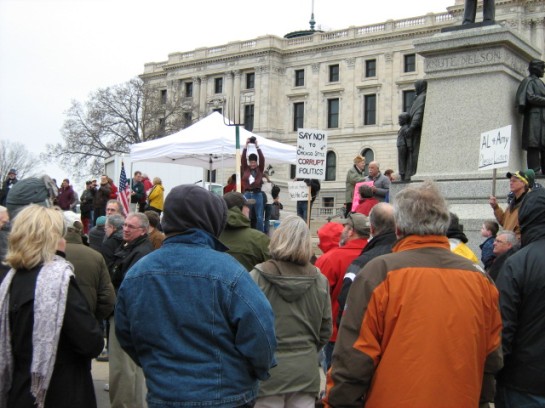 Pundette approves of the sentiment wholeheartedly, but has some suggestions for safer “power-to-the-people equipment”.

More pictures and a full report at True North.

On a more solemn note, Baghdad Bobby Gibbs bragged on Fox News Sunday, that by next weekend, they will have passed the bill. Michelle Malkin says:  “Not Without A fight”.

If anyone is able to make it, Washington needs to to hear from you on the 16th for  The People’s Surge against Obamacare:

One thought on “3-4 Thousand Minnesotans Rally In St. Paul To “Kill The Bill””