What happened to cause this amazing turn around?  Did Harry Reid have a change of heart? Does he feel bad about his past behavior and comments? Or is he perhaps trying to be magnanimous in victory (of Obamacare)…

Or….wait….is this an election year?

Yeah, that’s would be it.

High drama seems to follow Andrew Breitbart wherever he goes. It’s a good thing the cameras were rolling.

I’m told that Breitbart wants this story out on all the blogs since the MSM will ignore it. Like they ignore all other instances of left wing violence, because it doesn’t fit their narrative. Well, it’s time to start hitting them back.

Glenn Reynolds is on the right track with this:

I hope that those Democratic politicians and media figures who have incited this sort of violence against the tea parties with their extremist rhetoric will try to rein in their violent followers before their violent rhetoric produces still more political violence.

And as I mentioned in an earlier post – Friendly media types, like any of the anchors on Fox (with the exception of Geraldo, I guess) need to challenge these reports of tea party racism, and violence, instead of assuming there must be some truth to it. No there must not be any truth to it. Alinsky Democrats have no respect for the truth, and the sooner decent people understand  that, the better.

Victor Davis Hanson hit the nail on the head when he described the leader of the Alinsky Dems,  thus:

All politicians fudge on their promises. But this president manages to transcend the normal political exaggeration and dissimulation. Whereas past executives shaded the truth, Barack Obama trumps that: on almost every key issue, what Obama says he will do, and what he says is true, is a clear guide to what he will not do, and what is not true. It is as if “truth” is a mere problem of lesser mortals.

That’s how they all feel, but most aren’t as brazen as dear leader is about it.

Cold Fury: Had enough yet?

Doug Ross: If you Liked Pravda’s Reporting In The Seventies, You’ll Love Legacy Media’s Coverage Of The Searchlight Tea Party

Friday’s Gregalogue: Anger is a Right

Must read. It’s brilliant and it will make you laugh – and if you disagree, you’re probably a racist,  homophobic, cannibal, too.

Connect the dots of Obama’s first year in office, and an ugly picture emerges.

What do they expect to gain from this? Do they think they’ll look like they’re standing up to big business to protect “the little guy”? The Dem Socialists’ policies are ruinous to everyone.

This past week several big companies, including Caterpillar, Verizon, and AT&T, announced that ObamaCare would cost them millions of dollars this year. To pay for it they variously suggested layoffs and benefits reductions. Analysts suggest that the total first-quarter hit to S&P 500 firms will be $4.5 billion.

Democrats can’t stand to have their precious economy-destroying healthcare program criticized in its very first week, so they’ve announced an “investigation” into the claims. Late yesterday, the House Subcommittee on Oversight and Investigation sent letters to the CEOs of AT&T, Caterpillar, Deere & Co, and Verizon asking them to appear for a hearing on their claims. In the letters, Waxman and Stupak ask for company documents including accounting analyses and the internal emails of all “senior company officials” related to the projected costs of ObamaCare. How serious are they? The letter actually defines “senior company officials.”

Obamacare “will expand coverage and bring down costs.”

As the Journal’s editors observe:

“Black-letter financial accounting rules require that corporations immediately restate their earnings to reflect the present value of their long-term health liabilities, including a higher tax burden. Should these companies have played chicken with the Securities and Exchange Commission to avoid this politically inconvenient reality? Democrats don’t like what their bill is doing in the real world, so they now want to intimidate CEOs into keeping quiet.”

If we are now under a system where disclosure gets you a public whipping and other threats by the Powers That Be while nondisclosure promises the ruinous expenses of defending against criminal investigations and civil enforcement, this is no longer anything but a thugocracy.

﻿”Thugocracy” is putting it nicely.

Some snarkage from Dan Riehl:

Waxman To Call For Hearings On Florida Citizens

I don’t know how much of the state they’ll be able to get into the hearing room. But as the citizens of Florida clearly strayed from the Leftist talking points on ObamaCare in this new poll, I think only a Congressional investigation can get to the bottom of this conspiracy!

AoSHQ: Get In Their Faces: Administration Lashes Out at John Deere, Caterpillar For Accurately Reporting Their Finances

A year ago, Obama threatened to call out executives who kicked up a fuss over his policies. But he had a hell of a lot more political juice, then. I don’t think CEOs are particularly frightened now at being called out by an unpopular president.

Remember this from May ’09, when an Obama surrogate, Steven Rattner threatened Chrysler non-Tarp investment companies?

Confronting the head of a non-TARP fund holding Chrysler debt and unwilling to release it for any sum less than that to which it was legally entitled without compelling cause, this country’s “Car Czar” berated the manager of said fund with an outburst of prose substantially resembling this:

Who the f*** do you think you’re dealing with? We’ll have the IRS audit your fund. Every one of your employees. Your investors. Then we will have the Securities and Exchange Commission rip through your books looking for anything and everything and nothing we find to destroy you with.

You think anything like that is going on with these CEOS?

Linked by Michelle Malkin, Cold Fury and Gay Patriot, thanks!

What made her say that? She wasn’t even close: 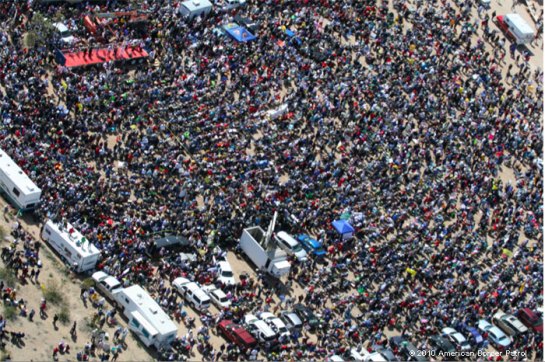 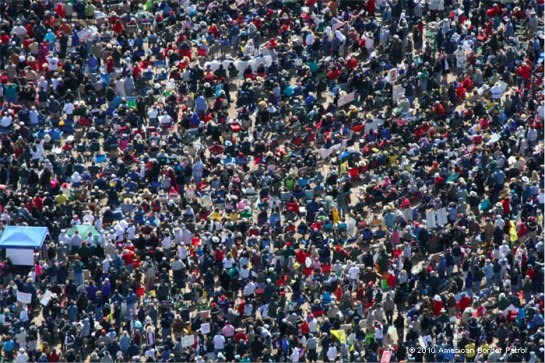 Here was the traffic jam on the way into town: 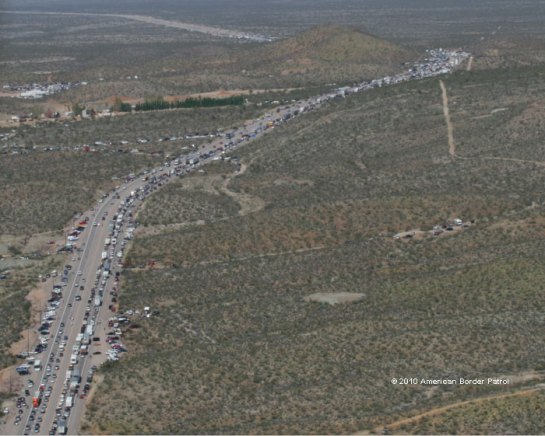 CNN’s Fredericka Whitfield wasn’t quite prepared to give the rally credit it was due as far as participation. She estimated that hundreds, but if not, “at least dozens of people” were in attendance.

“Former vice presidential candidate Sarah Palin there in Searchlight, Nev., was the backyard of Senate Majority Leader Harry Reid, but today it’s the backdrop of this Tea Party Express – making a stop here,” Whitfield said. “Hundreds of people, at least dozens of people – we haven’t gotten a count of how many people turned out there. We heard Sarah Palin talk about everything about the campaign, to unseat Sen. Reid to what she calls ObamaCare, on the heels of that health care vote and even talking about her definition of her love of America.”

By the time Sarah Palin had spoken, the crowd had swollen to the size you see in the pictures. This woman is either grossly incompetent at estimating crowds, or was being blatantly dishonest.

Members of the press corps estimated the crowd size between 9,000 – 14,000 but the security and crowd control firm working the event estimated 30,000+.

Representatives from the security firm indicated they would be happy to confirm their estimates with interested members of the press, and based their estimates on their history of crowd control for other such public events.