I’m not the only one noticing how the left, led by Obama, are using overheated rhetoric to whip up protesters.

The omens are everywhere. Iran is close to obtaining nuclear weapons. The eurozone is in crisis. The U.S. unemployment rate is near 10 percent. America’s social insurance programs threaten to bankrupt the country. And—most unusual—the Washington Nationals are above .500.

But rest easy. None of this is distracting the Obama administration and congressional Democrats from their fulltime occupation: demonizing the political opposition.

and CNBC’s Dennis Kneale’s: Obama is a Bully

The President called the measure “misguided” and all but labeled it un-American. He even ordered the Department of Justice, before the ink on this bill-signing has even dried, to examine the civil-rights “implications” of the new law. Seems like the courts and rights groups could handle that once any problem actually emerges.

Can you remember any other modern President, wagging a finger from on high, so directly and bitterly criticizing a new law passed by any state?

This is hubris at best and ignorance of the Constitution at worst. The U.S. was founded in part on the precept of states’ rights as an important counterweight to a rapacious federal government. Thus a President must step softly here, questioning gently but avoiding rancor and browbeating.

He might try avoiding Lies, Fish Stories, Whoppers, and Damn Lies, as well.

The Washington Times weighed in with: EDITORIAL: Obama’s race-baiting:

The president is playing with fire by misleading the nation to stir up racial tensions. He’s a lawyer who knows what terms such as “lawful contact” and “reasonable suspicion” really mean. If blood is shed over this imbroglio, it will be on Mr. Obama’s hands.

See Michelle Malkin and Uncoverage.net for a round-up of  May Day extremism and violence from across the country.

Someone please tell me that this guy is a right wing infiltrater: 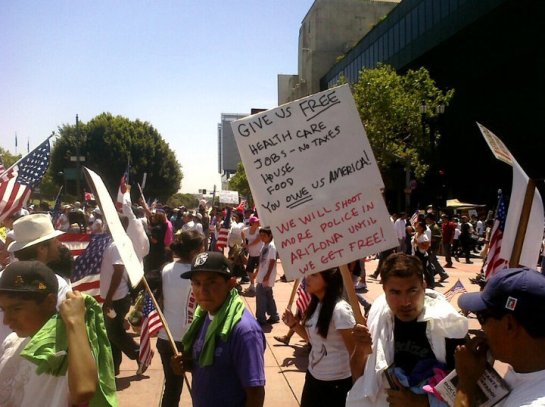 He can’t be serious…

Gateway Pundit has more on the violence against the Minutemen in SF:

Moonbattery: What the Media Wishes Tea Parties Were Like Photos from aftermath of “moonbat-infested” Ashville, NC protest, and others.

Something about all this seem strangely familiar?