I met this charming lady while I was in New Orleans, back in April  attending the SRLC . I remember introducing her to my husband as, “ACORN whistle-blower, Anita MonCrief”. And a whistle-blower she certainly is – Anita’s a rare bird who has been inside the belly of the beast – an enthusiastic participant inside a stealth movement, which she slowly but  surely came to understand was a stealth Socialist movement. She eventually became disenchanted, and left.

Now she wants the whole world to understand what we’re dealing with.

Her latest post Obama, ACORN and Stealth Socialism: Dire Domestic Threat is long, but worth reading in full.

“Why did the Western media persist in calling the social system in the Communist bloc ‘Communism’ instead of Socialism? They did it to manufacture a false reality: to protect the reputation of another form of Socialism which existed in the West….so-called ‘Democratic Socialism’, socialism by stealth, socialism achieved through the ‘permeation’ of existing political institutions by members of organisation such as the Fabian Society, in order to influence the policies adopted by those institutions towards socialism.

“Democratic Socialism itself was based on a lie: that Socialism could be implemented peacefully through the ballot box. The implication was that if the voters didn’t like it they could vote it out again. That was a hoax. Since Socialism does not permit private ownership of property, it cannot be ‘democratic’ in the sense of allowing a choice of political Parties. This is not a matter of ideology, but of logistics. It would be impossible to have a two Party system of genuine democracy, for example, under which the state nationalised all property including business when the Socialists were voted into power, then sold it all back to the people again when they were voted out. The intention of Democratic Socialism was (and still is) to be democratic just long enough to gain power. Then it will declare the ‘end of history’ and entrench itself forever, enforcing its politically correct speech and thought on everybody, and being just as tyrannical as its Marxist revolutionary counterparts.”

How to make a socialist the ACORN way

As an ACORN insider my indoctrination as a socialist was a slow but steady progression from radical liberalism to embracing the stealth socialist methods that had made ACORN a powerful force in American electoral politics. Two years ago, in the mist of a heated presidential election year, I noticed a Facebook page of Socialism 2008. The graffiti-like picture beckoned young Socialists to Chicago, Illinois on June 19th, 2008.  I RSVPed for the event on Facebook without fully understanding what had just taken place. The line between radical, liberal Democrat and socialist was almost invisible at this point. 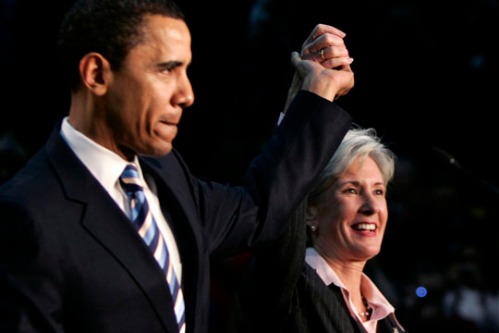 Looking Out for YOU, whether you want them to, or not!

If you are the HHS Secretary Kathleen Sebelius, the answer is apparently “No.”, or at least so she asserts in a motion to dismiss responding to Virginia’s suit against the Great HealthCare Takeover of 2010:

Health and Human Services Secretary Kathleen Sebelius argued in a motion filed hours before a midnight deadline that the law is well within the scope of the Constitution’s Commerce Clause.

Commerce Clause, Commerce Clause.  How we love thee.  You can make every issue a federal one.  Even when that nasty old Tenth Amendment says that it isn’t a federal issue.

Well gee.  Buying something is commerce, and eventually all commerce somehow has a national impact right?  Therefore it must be a federal issue.

More than a dozen state attorneys general have sued over the legislation on broadly similar grounds in cases that are likely be determined by the Supreme Court.

The conservative attorney general sued in defense of a Virginia law enacted this winter that exempts state residents from being required to have health coverage.

Sebelius argues in her dismissal motion, however, that Virginia lacks the standing to sue.

“A state cannot … manufacture its own standing to challenge a federal law by simple expedient of passing a statute purporting to nullify it,” read the motion. “Otherwise, a state could import almost any political or policy dispute into federal court by enacting its side of the argument into state law.”

Sebelius also contends that the new law, passed solely by the ruling Democrats in Congress and signed by a Democratic president, is constitutional.

“Even if Virginia could surmount this jurisdictional barrier, its claim still would fail because Congress, in adopting the minimum coverage provision, acted well within its authority under the Commerce Clause,” the motion says.

The mandate for most U.S. residents to carry health insurance starting in 2014 is at the heart of the federal law’s goal of medical coverage for all. Without it, the Justice Department explains in the filing, the new law – and its efforts to contain costs – becomes moot.

“When accidents or illnesses inevitably occur, the uninsured still receive medical assistance, even if they cannot pay. As Congress documented, such uncompensated health care costs – $43 billion in 2008 – are passed on to the other participants in the health care market: the federal government, state and local governments, health care providers, insurers, and the insured population,” the motion says.

It is as elegant as an M.C. Escher drawing.  The Feds pass laws requiring that hospitals provide emergency care, then, because of the cost of the care they mandate, decide that every American must pay for coverage that it approves of in order to help defray the costs of the care that they mandated…and all with nary a serious thought to their authority to be involved in mandating the care to begin with.  Logic like that isn’t worthy of characterization as a mobius strip…no, no…it is better than that.  It is an Escher drawing! 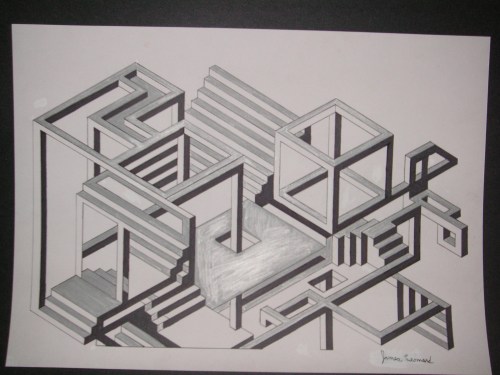 There was an interesting discussion of the Sestak bribe on Morning Joe, today. Joe seemed pretty confident that the job Sestak was offered, was Sec. of the Navy, since he never denies it when asked.

Dave Weigel of the Washington Post, however, argues that Sestak couldn’t have been nominated for secretary of the Navy. The timeline he offers  seems to dash that theory:

On March 27, 2009, the administration nominated Ray Mabus as secretary of the Navy. It wasn’t until April 28 that Specter became a Democrat, and by Sestak’s own recollection, he was literally being courted to run the day that news broke. On May 18, the Senate confirmed Mabus. And on May 29, Sestak entered the Senate race.

Pat Toomey, his Republican opponent appears in the second half of the video:

Megyn Kelly brought us the latest on the scandal on her show, earlier today:

Darrell Issa appeared on talk radio, (630 WMAL) to answer questions. He explains what the crime is here, if what Sestak has been saying is true. (Some of the dimmer bulbs on the left – *cough* Media Matters *cough* have been making the argument that the Sestak bribe is no big deal – it happens all the time!)

Never mind the fact that New Yorkers are virulently against the idea.…bad ideas always win out when diversity is on the line, because there’s nothing more alluring to a liberal, than to think that they are smarter and more tolerant than the rest of us.

“It is crucial to study the supremacist ideology of Islam and to recognize, for example, that the building of a mosque especially at Ground Zero is viewed by Muslims as a decisive victory over the infidels in Islam’s march to establish its ultimate goal: the submission of all others to Islam and to Sharia Law.”

This is a travesty:

After hours of contentious public comment, a New York City community board voted late Tuesday to support a plan to build a mosque and cultural center near ground zero.

“It’s a seed of peace,” board member Rob Townley said. “We believe that this is a significant step in the Muslim community to counteract the hate and fanaticism in the minority of the community.”

The vote was 29-to-1 in favor of the plan, with 10 abstentions. The move by the Manhattan Community Board 1, while not necessary for the building’s owners to move forward with the project, is seen as key to obtaining residents’ support.

The meeting was unruly, with project opponents jeering at speakers and yelling comments such as “You’re building over a Christian cemetery!” while holding signs that read, “Show respect for 3000,” referring to those who died in the Sept. 11, 2001, terror attacks.

Many said they were not opposed to a mosque — just not one that’s two blocks from ground zero.

Pamela Geller was there, and spoke. Video, and pictures here. 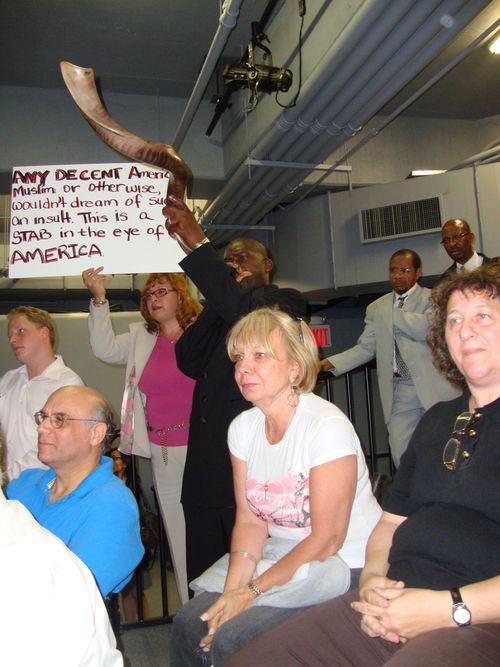 Pamela says: “Every time someone spoke against the monster mosque, this lovely black priest  blew …………..the shofar. It was fabulous”.

Robert Spencer has more on the meeting at Jihad Watch.

I also found this about the New York Imam, Feisal Abdul Rauf of the Cordoba Initiative, the dovish bridge-builder behind the “center” at an old Jihad Watch post from March, 2004:

Feisal Abdul Rauf, a New York imam, expects us to believe that jihad warfare was started by the West and can only be ended by the West. He is therefore either concealing or ignorant of the fact that violent jihad is a developed tradition within Islam and found in core Islamic texts (including but not limited to the Qur’an, as well as Hadith and books of Islamic jurisprudence). In those it has nothing to do with the behavior of infidels. It only has to do with the fact that they are infidels.

The US and the West must acknowledge the harm they have done to Muslims before terrorism can end, says an Islamic cleric invited to Sydney by Premier Bob Carr.New York-based Imam Feisal Abdul Rauf, who impressed Mr Carr at an international conference last year, arrives in Sydney today for two weeks of meetings and public talks.

Speaking from his New York mosque, Imam Feisal said the West had to understand the terrorists’ point of view.

In a move likely to cause controversy with church leaders, Imam Feisal said it was Christians who started mass attacks on civilians.

“The Islamic method of waging war is not to kill innocent civilians. But it was Christians in World War II who bombed civilians in Dresden and Hiroshima, neither of which were military targets.”

As if WWII was a Christian crusade, or something. This is the guy who’s in charge of the giant $100 million mosque whoops! Islamic center.

Imam Feisal, who argues for a Western style of Islam that promotes democracy and tolerance, said there could be little progress until the US acknowledged backing dictators and the US President gave an “America Culpa” speech to the Muslim world.

And what do you know, we now have a President who engages in mea culpas for American sins every chance he gets, including a big one directed specifically to the Muslim world.

There have been three terror attacks on American soil since that speech.

Still waiting for that progress. Maybe a mosque on Ground Zero is what they consider progress.

Ace says the community board does not have final approval or anything; it seems advisory in nature.

Well, that’s good to know. I thought that the board vote meant that it was a done deal.

at Bread Upon the Waters: NYC Community Board Okays Ground Zero Mosque Plans

Andrew McCarthy, author of the new book, The Grand Jihad: How The Islam and the Left Sabotage America appeared on the Sean Hannity Show, Monday, to talk about jihad in America, and its connection to the left: