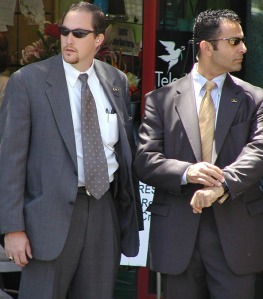 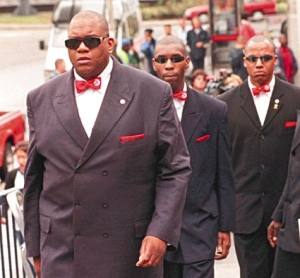 As you’ve no doubt heard, rather than stay in DC and visit Arlington National Cemetery on Memorial Day,  the President opted to travel to Chicago, back to his house in the old neighborhood:

Byron York covered a minor bruhaha that occurred while the Obama family was enjoying  BBQ at friend and treasurer for Organizing For America, Marty Nesbitt’s house

President Obama’s home is in the same Chicago neighborhood as Nation of Islam leader Louis Farrakhan.  On Saturday night, the overlapping of Obama’s and Farrakhan’s worlds made for a strange, and sometimes testy, encounter between the Secret Service, the press corps covering the president, and the paramilitary security force, the Fruit of Islam, surrounding Farrakhan.

The encounter was written up — for distribution to the press, not necessarily for publication — by the New York Times’ Jackie Calmes.  It began a little after 4:00 p.m. when Obama and his family walked to the nearby home of longtime friend Marty Nesbitt for a backyard cookout.  It just so happens that Nesbitt lives across the street from Farrakhan.

After an initial misunderstanding,  one of the Secret Service guys explained to the Fruits of Islam guys that they weren’t interested in what was going on at Farrakhan’s house…

It might be assumed that an assurance from the Secret Service would be enough to satisfy any security-minded guardian of Louis Farrakhan.  But not in this case.  Calmes continues:

The man is back to pacing and talking on his cell, walkie-talkie in hand.

A co-pooler searched the Internet for the address and found it listed on a Web site called NotForTourists and another called Taxexemptworld.com. Indeed, another pooler found a county Web site that confirmed this property is tax exempt for being a religious institution.

Reinforcements arrived — three men in T-shirts reading “Wide or Die!” One surly man has been staring daggers at us. Asked if this is Minister Farrakhan’s house, he just stared at your pooler. Asked again, he said, “I don’t have no comment.”

At nearly 8 p.m. local time we are still holding while POTUS and family remain at the Nesbitts.

More time passed.  The men in T-shirts were joined by even more men,  from the Fruit of Islam, Farrakhan’s security force.

Continue reading at The Examiner.

Gabriel Malor summed it all up quite nicely at AoSHQ:

Linked by Michelle Malkin in Buzzworthy, thanks!