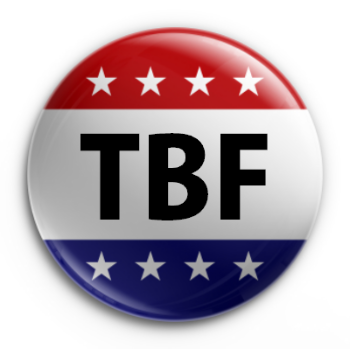 Another week, another great bunch of candidates on the TBF poll (located on my upper right sidebar).
Right Klik gives us the TBF poll in a nutshell:

This is a poll designed to promote rising conservative stars. At the end of the week, the winner will be promoted by a network of over 80 conservative blogs and will receive a flurry of contributions from patriots across the country.
We’re working to fill a leadership vacuum that has resulted from the failures of the Washington-based Republican establishment.

There’s a write up about each of the candidates at Right Klik if you’d like to learn more about them.
The Nice Deb Pick this week is Vicky Hartzler, who’s running against Ike Skelton in MO-4.

In 1994 she ran for state representative and was overwhelmingly elected to represent parts of Cass and Johnson Counties. She served in the Missouri House of Representatives for six years where she championed legislation promoting adoption, strengthening education, and lowering taxes for working Missourians. She fought for small business owners, farmers, workers, and the jobs they create and hold. She fought for what we value—life, individual rights guaranteed us in the U.S. Constitution, freedom.

In 2000 Representative Hartzler decided to not seek re-election after the Lord blessed her husband and her with a beautiful baby girl.

Vicky Hartzler has written newspaper columns over the years, written op-ed pieces for the KC Star and St. Louis Post-Dispatch, and spoken to groups on a variety of topics. She teaches Sunday School at her church and has been a speaker at women’s conferences.

In 2005 Missouri Governor Matt Blunt appointed her chairperson of the Missouri Women’s Council—an agency within the Department of Economic Development dedicated to helping women achieve their economic goals—and was overwhelmingly confirmed by the Missouri Senate.

Vicky and her husband, Lowell, run a diversified farming operation and are owners of Hartzler Equipment Company with store locations in Harrisonville, Nevada, and Lamar. The Hartzlers live with their daughter, Tiffany, near Harrisonville, Missouri.

Since leaving office in 2001 she has remained active in politics coordinating and managing numerous campaigns and serving as state spokesperson for the Coalition to Protect Marriage in Missouri in 2004. That year she was one of the main organizers of the campaign to protect traditional marriage and participated in over 150 interviews with television, radio, and newspaper reporters from all over the world as well as took part in debates on television and radio. Despite being outspent 22 to 1, on Election Day, Missouri sent a clarion call around the world that traditional marriage was worth protecting by passing the constitutional amendment with 71% of the vote. She is the author of the book “Running God’s Way: Step by Step to a Successful Political Campaign”. The project is designed to encourage and equip more people with integrity to get involved in the political process.

Ike Skelton is considered a bluedog Dem even though he votes with San Fran Nan 95% of the time. He’s been a fixture in Congress for nearly three decades, but this is a an anti incumbent Republican wave year, and District 4 is a red district which voted for McCain over Obama 61%-38% in 2008.
This thing is very doable.
10 Buck Friday Blogroll:
Read the rest of this entry »