In case you haven’t noticed, (because we got a late start, this week)I have a new Ten Buck Friday poll up on my right sidebar. Right Klik calls it the Ten Buck Fridays: Winner’s Circle:

All of the candidates featured in this week’s poll have won in previous TBF polls. Many were considered to be underdogs early in the election season, but now they’re much more competitive. All of these candidates need our help…

(To ensure that your vote is counted, vote before you view results… and vote from home if possible.)

Dan Riehl asks Should A GOP House Investigate Media Matters?: Mark Levin says yes in his Facebook post, Media Matters: Criminal front group. He, like many of us, has been saying that for years. It’s way past time something be done about this blatant State-sponsored propaganda. Going forward, the stupid, hapless, go-along-to-get-along Republican party needs to become a smart,  ruthless, this-commie-b.s-happening-right-under-our-noses- needs-to-end party.

Jim Geraghty says this RGA ad will either Stir Your Outrage, Or Give You a Seizure:

Nobody can be this stupid? Oh yes, they can: Deficit Is a Myth, Nothing to See Here, Move Along, The mindless drones willing to vote for such unprincipled buffoonery are no Einsteins, either.

Michelle Malkin has the poop on another TARP-style banking bailout bill that “somehow reached President Obama’s desk in the legislative rush before Congress adjourned for the midterm election break”. Did you know about this? I didn’t know about this…

What the hell: How stealth banking bailout reached Obama’s desk

Check back…I’ll be adding more links as the day wears on.

Desperate times call for desperate measures, and we are beginning to see the Democrats start to rely on “dirty tricks” to spoil the fun (because if you have to run from the policies that are destroying your party’s popularity, you have to resort to all means, fair and foul — and mostly foul — to win). Politics is war by another means, and when the Democrats are led by the Cook County Gang that could not play straight, all sorts of tactics will emerge.

Also at Big Hollywood, Greg Gutfeld has a Funtime Game! Who Will ‘Parker Spitzer’ Have On Next to Trash Palin?

The crap almost writes itself.

So I’ve come up with a game to help CNN plan the next three shows. Just match a lefty guest, to a predictable Palin insult.

Ed Asner could call Palin, an “empty-headed threat to freedom.”

Sean Penn could says she’s, “a mindless zombie with a bloodlust for power.”

Tim Robbins could chime in: “Palin is an imbecile in half-wit’s clothing.”

And his mom, Susan Sarandon could dismiss her as, “A Nazi with nice breasts.”

This could go on for…years!

“I read that they were investing all this money in a stylist and I thought no matter what money you throw at this man, at the end of the day, he’s still a gremlin and a dishonest, corrupt career politician whose only interest is rehabilitating his own image enough to get back into politics.

“It’s pretty sad that CNN has given him a forum to let him influence the lives of other.”

The Daily Caller: U.S. waivers after threats of lost health coverage prompting a good question from Erick Erickson: What’s The Point Of Obamacare Then?

Drew at AoSHQ chimes in:

It’s not bad enough that the government is mucking around in people’s health care decisions; now big government is going to be in the business of handing out special dispensations for the chosen few. If you like your coverage, you can keep it…if we deign to give you a waiver. I wonder what groups will be looked upon favorably by this gangster administration and which will be told to go to hell. I’m sure it’ll all be very fair and equitable.

Via kill_truck on Twitter: For Sale: A picture of Marilyn Monroe you’ve probably never seen.

Across the country, Americans are fighting against the new health care law, the Patient Protection and Affordable Care Act (PPACA). On this site, you’ll find a list of the challenges that are currently moving through our court system, which you can click on to get more information. As of today, there are more than 20 active cases challenging Obama’s health care reform, with 21 states as Plaintiffs.

New info on Obama’s Communist Mentor due to his declassified 600-page FBI file, which was recently released through a freedom-of-information request: Frankly Speaking… Davis’ bizarre son weighs in in the comments.

More good links at Potluck, (plus the only time in your life you will ever see this headline): Get your vulture fart carbon credits

Quin Hillyer is a wet blanket, but he’s right: The Election Doomsday Scenario – not a prediction of how things will be, but can be if we re not vigilant.

An even more unsettling report from Labor Report at Big Government: How Unions or Their Allies Could Be Stealing November’s Elections Right Now

In order to break this down, here are the disconnected dots that are detailed below:

I’ve been saying all year that these villains are not going to give up their power, (and give Issa subpoena power) that easily. Why have Dem leaders been so confident?Why have they been so brazen in their disrespect for the peoples’ will?

Why Does Kris Kobach Pose Such A Threat To The Left And Their Liberal Agenda?

Answer: Kris Kobach’s plan to end voter fraud will
seriously jeopardize the base of undocumented
Democrats! 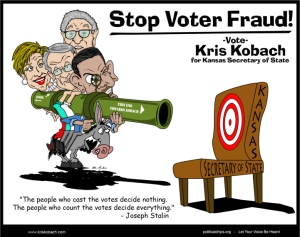 Congratulations are in order to our Fedoraed friend!: DaTechGuy on DaRadio is DaReality!

Billboard of the day seen at The Other McCain: Republican Ray McKinney Reminds Georgia Voters They Have a Choice

More Ace: Chris Christie: No, I’m Quite Serious, I’m Not Spending Money We Don’t Have

TWITTERGATE – This is a story about how the Democrats hired a Twitter-Thug to run their social-media campaign and to smear the Tea Party.
The evidence submitted demonstrates the systematic and deliberate provocation towards people in an attempt to elicit unfavorable responses after a series of malicious and vile attacks.
The idea was to antagonize, collect and present selected responses as proof of “extremism” within the Tea Party.
What you are about to see is the documented account of how this system was implemented, who these people are and who hired them.
Some of the collected material is vulgar and profane. View discretion is advised.

Linked by Michelle Malkin, Buzzworthy, thanks!