Der Fuhrer gets some bad news…doesn’t take it well…

via the Blog Prof

The Rent is Too Damn High! song:

Sights and sounds of the teaparty:

Charles Krauthammer on Obama’s post election press conference: “His demeanor was subdued, which I suppose is his way to approximate humility, about as good as he gets, because he’s not very good at the real thing…”

Linked by Betsy’s Page and Michelle Malkin, thanks!

Reason TV has been putting out some great videos, lately. Their most recent effort is a reminder of why no one should miss this big, mashed up bag of  meat with a Cornell agricultural college diploma:

Gabriel Malor offered up some fine analysis at AoSHQ, this morning, after noting that quite a few cable news personalities have made political donations,  including Chris Hayes who was to temporarily replace Olby, Joe Scarborough and CNBC’s Larry Kudlow.

It looks to me like NBC pulled the trigger on Olbermann before they even examined how common it is for commentators to make political monetary contributions aside from their obvious nightly political expressive contributions. Which puts this in the Shirley Sherrod — “rush, rush, fire her before the teabaggers react” — category. If they really have a rule that applies to a commentator like Olbermann, it’s a stupid rule. We already know he supports libtards. Duh. I hate to break it to the NBC execs, but no one expects journalistic integrity from Keith Olbermann and no one’s is upset that he doesn’t have any.

Which also puts his suspension and possible firing in the Juan Williams category. They were looking for a reason to ditch Olbermann. Could be his low ratings, his embarrassing on-screen behavior, or his treatment of others at NBC. Could be a combination of all three. But its probably not his support for Democrats. That was obvious before.

I think it may be that they were just looking for an excuse to get rid of him.

It can’t possibly be that by suspending Olby, MSNBC thinks they have  somehow proven their journalistic integrity…that  is too absurd for any reasonable person to take seriously, especially after their embarrassingly partisan election night coverage.

Yet, incredibly, some liberals have been trying to make that case, because the main target for them is Fox News. The Soros/Media Matters dog whistle has the drones reacting like Pavlov’s dogs, throwing Olby under the bus, if  they think Fox can be hurt in the process.

Here is what a liberal commenter argued in my previous thread:

As I said, Olbermann shouldn’t have done it, and I have no problem with him being suspended (or fired). But Fox’s policy is a bad one for any organization with “News” in its name.

It’s no secret to anyone that MSNBC is a left-wing news organization. Why pretend otherwise?

Why stifle a private citizen’s right to support the candidate of his choosing?

Agreed, just like it’s no secret that Fox News is a right-wing organization. But if you’re going to pretend to be an unbiased “news” organization, you shouldn’t be pimping for–or financially supporting–the people you’re interviewing.

Nevermind the bizarre leap that by donating to a candidate, you’re “pimping” him…I honestly don’t understand his confused thinking. Why allow cable news  anchors to vote, then, if by favoring  certain candidates, it makes them biased (we already know reporters are biased, some more overtly than others).  Would Keith Olbermann be an impartial journalist if he hadn’t donated? The whole argument is nonsensical to the core.

Olbermann’s main problem was that he had been  attacking Fox for doing the exact same thing he was doing. It always comes down to the rank hypocrisy and dishonesty of these people.

But my friend wasn’t through:

Let me put it to you this way: If a reporter gives to a Democratic candidate, does it make you more or less likely to believe s/he’s objective?

If you say it makes no difference, good for you–but I think you’re in the minority.

To which I replied:

Good grief… I already don’t believe that the MSM is objective!

Maybe it doesn’t bother us conservatives because we’re so used to blatant left-wing bias in the news, and we don’t think for one second that banning folks from making contributions, is going to have any effect on that.

But even if Olbermann was fired for stupid reasons (and this is definitely a stupid reason) … so what?  As long as MSNBC operates within the contract, it’s their decision to have whomever they want in that slot.  Why would anyone rush to defend someone who refers to conservative women as a “big bag of mashed-up meat with lipstick” while supposedly filling the role of a news anchor?  Does a man with a long track record of launching hyperbolic insults and accusations deserve to have people rushing to defend his violation of what appears to be a long-standing rule (even a stupid one), especially when the same person spent prime-time air just a few weeks ago blasting his competition for doing essentially the same thing?

If NBC does fire him, they have plenty of good reasons to do so, not the least of which was the dreadful, histrionic, and completely unprofessional meltdown on Election Night from their entire prime-time lineup.  They shouldn’t stop with Olbermann; in fact, they should start with Phil Griffin and start working downward.

No, I’ll give Rachel Maddow the last word… not a fan, here, but I’ll give her this – the gal has a sense of humor!

MSNBC’s Maddow Defends Olbermann: “We Should Have Keith Back” (<<<Watch video at link.)

(Liberal? Hey, why not come out of the closet, and fess up like your colleague Lawrence O’Donnell? I’d respect you more for it).

There are other people on this network whose political views are shared openly with our viewers. (all ten of them)
Election night, 2010;

We are not a political operation. 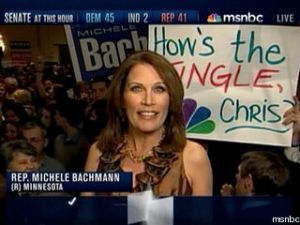 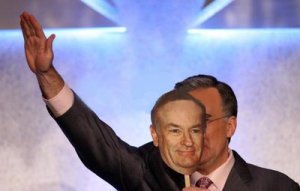 We are a news operation. 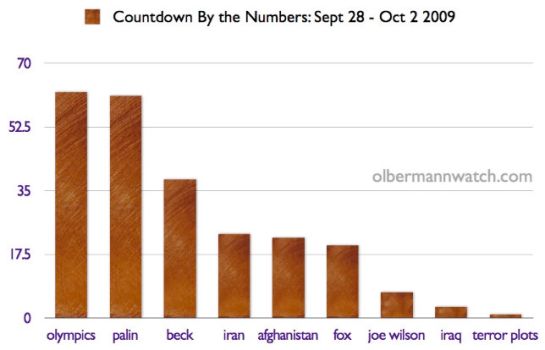 The rules around here are part how you know. Keith Olbermann attracted the ire of the right-wing and raged against what he saw as the errors and sins of the previous administration. Keith was also the one who brought to light FOX News’ water-carrying role for the Bush administration,” Rachel Maddow said in defense of her MSNBC colleague on her show Friday night.

There is of course, no water carrying done at MSNBC, for the Obama administration. Good lord, woman.
–

To paraphrase Gabe; these folks are so alien to me I can’t meaningfully comprehend their minuscule brain activity.
–
Linked by Michelle Malkin, and Doug Ross, thanks!