Poor Charles seems a bit traumatized by such positive attention from the likes of Bill Clinton:

I’m at the point where I want this bill scrapped as much as the Dem Socialists do. We expected better from the Republicans.

Start over. No more tricks.

I missed this when it happened, but it should be on YouTube in short order. TCOTers like Cuffy were all a-Twitter about the stunningly bad optics of Obama leaving Clinton at the podium during their joint press conference about the tax deal. Obama was unable to say any parting words (besides, “I’m taking off”)…because Clinton wouldn’t stop talking.

Added: Video via The Daily Caller:

In terms of Washington political drama, Friday was an instant classic:

The president stood by Mr. Clinton’s side for several minutes as Mr. Clinton held court in front of the White House logo that often hovered behind him a decade ago.

But after Mr. Clinton began taking questions, the current president excused himself, saying that the first lady, Michelle, expected Mr. Obama’s presence at one of the many holiday parties that presidents host during the month of December.

And with that, Mr. Obama departed, leaving Mr. Clinton to continue his extended conversation with the media. The image on the television screen – of Mr. Clinton at the White House, behind the official podium – had a time-warp quality to it.

A Freeper described what happened, this way:

Watching Obama and clinton press conference live on CNN. Obama tries to nudge Clinton off stage, you can even see him lower his shoulder to push his way in front of podium but clinton would not move. Finally after standing around looking like a child who’s dad has to fix things, Obama pats clinton on the back and tries to save face by exiting the stage. clinton simply keeps on talking as if he is still president and a servant just left the room.

Did Obama just jump the shark?

Obama had Clinton over for a chat, then brought him to the briefing room. Then it got weird. Obama just…left and let Clinton have the mic for like, I don’t know, 20 30 minutes or so.

Business Insider: WATCH: Obama Walks Out On Presser With Bill Clinton! ‘I’m Going To Take Off’

It was a terrible visual to begin with — I’m not a wussy, here’s Bill Clinton to tell you why! — that just got so. much. worse.

The White House press corps was “summoned at a moment’s notice” to the briefing room for the news conference. And not long after the two presidents appeared together at 4:23pmET, it became AAB — all about Bill (or Bubba, take your pick).

The depressing truth: Given the alternative, it really would be great news.

I can’t do justice to what you’re about to see. The spectacle of the president bugging out of his own press conference to go to a Christmas party is weird enough, but having Clinton back at the White House podium fielding questions on the hottest domestic issue of the day shoots past deja vu and lands firmly in “am I hallucinating?” territory. (The good news: It turned Twitter into an hour-long snark free-for-all, with Michael Goldfarb taking first prize.)

The Caucus Blog: The Surprise Trip to the Briefing Room

…And here come the snarky photoshops:
–
Slublog at AoSHQ: Give Obama a Break
– 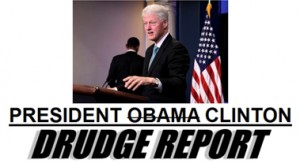 Linked by Michelle Malkin, and Pundette, thanks!

The national Planned Parenthood abortion business is at it again, using a sacrilegious Christmas theme to raise money for its efforts to promote and perform abortions.

Nice. Mocking Christmas has become a time honored tradition for Planned Parenthood. And why are they raising money? Because that  “extreme”, “dangerous”, “anti-choice” hater,  Mike Pence is introducing legislation that would cut off taxpayer funding for Planned Parenthood: Title X Abortion Provider Prohibition Act.

Pirate’s Cove has more on the left’s war on Christmas: Tis’ The Season For Liberals To Go Nuts Over Nativity Scenes

Read this from iowntheWorld to cleanse your palate: A Yuletide Gift of Kindness. Seriously, it’s the feel good story of the week.

And the Obama hits just keep on coming. If Wikileaks has done anything, it has vindicated this blog on Israel, Iran, Saudi Arabia etc.

The latest is that Obama stopped the transfer of weapons to Southern Sudan, site of an Islamic genocide that has slaughtered over two million southern Sudanese over the past two decades.

Keep America safe: Is Admin Releasing Terrorists It Knows Will Return To Battlefield?

How many more arrests of U.S. military-hating Muhammads will it take for “sadness” to evolve into genuine indignation? The latest Baltimore plot comes as the Beltway area remains under alert for an unknown shooter targeting recruitment stations and other military targets. Over the past two months, the Marine Corps Museum in Washington D.C., the Pentagon, a vacant Marine Corps recruiting station in Chantilly, Va., and a Coast Guard recruiting station in Woodbridge, VA have all taken shots from a high-powered rifle linked by ballistic tests. The feds say the arrest of the Baltimore jihadi is not related to these still-unsolved acts of terror.

If you read nothing else today, make time for: Zilla of the Resistance: TSA Insanity: Trained by Islamic Supremacists:

They told us if we elected Obama, the world would love us….Hot Air: Video: India “outraged” over TSA patdown of ambassador

On the lighter side…Jay Leno had some fun with Obama’s Wednesday Press Conference:

Glenn Beck’s apocalyptic world-view is jarring for many, but he’s been paying close attention to the movers and shakers on the far left, and connecting dots…if his conclusions sound whacked and delusional, consider the whacked-out but very determined subjects of his research.

The problem is getting worse, and will not go away without common sense regulations, like an end to early voting.

I hope Congressional Republicans set their sights on this issue before 2012.  Some are saying it’s time for an new voters rights act.

Pundit and Pundette: What a difference a bribe makes

That was fast. The deal that couldn’t be changed could after all. Obama has bought off rebel Democrats with a minimum of fuss (if you don’t count the chanting and posturing). Allahpundit:

The AP’s vague on the precise terms — and cost — of the bargain, but it sounds like that righteous liberal rage over the new estate tax rate magically dissipated after it was sprinkled with a few ethanol subsidies.

They were in open revolt, chanting “Just say no!” and “No we can’t” and invoking their leader’s name in most disrespectful terms. It made for a diverting  afternoon, but by nightfall it was over.

Linked by: Walter Hudson at NewsReal

So, who are the potty mouths?

That’s going to be the question of the day, Friday, and perhaps for the weekend. But I think we’ll know by the end of the weekend:

The frustration with President Barack Obama over his tax cut compromise was palpable and even profane at Thursday’s House Democratic Caucus meeting.

One unidentified lawmaker went so far as to mutter “f— the president” while Rep. Shelley Berkley was defending the package the president negotiated with Republicans. Berkley confirmed the incident, although she declined to name the specific lawmaker.

“It wasn’t loud,” the Nevada Democrat said. “It was just expressing frustration from a very frustrated Member.”

Remember how Joe Wilson was castigated for shouting something everyone knew was true at an Obama health care speech in September, 2009? And how Judge Samual Alito was castigated for simply shaking his head and mouthing the words, “not true”….during Obama’s horrendous  2010 State of the Union speech?

Pretty tame stuff compared to what Democrats are saying behind Obama’s back. Yes, more than one Dem were throwing F bombs at the meeting. According to Howard Fineman, appearing on a subdued  Keith Olbermann’s show, there was liberal use of the F word in that closed door meeting, including “No f’n way”, “he effed it up”…

A fun thought experiment: Imagine it had been a closed door Republican meeting where Reps had hurled F-bombs at the young, historic, black President. Would Olby’s reaction had been a timid, (ahhhhmmm, kinda strong, huh?)…or  perhaps something a  bit more severe ?

At any rate, via The Blaze, FBN contributor Charles Payne says someone owes Joe Wilson an apology:

Why didn’t the judge point out to  Occidental College Professor Carolyn Hellman, that poor people don’t pay taxes, so how can you give them a “tax cut”?

I wonder if she had the same Marxist Professors Obama did?