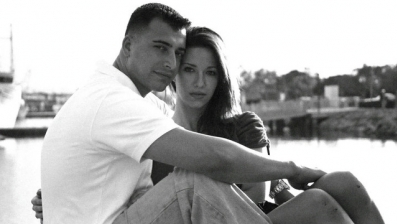 Iraq war veteran Federico Freire and wife, Kalyn, pictured above were attacked Saturday
outside a movie theater in Bradenton, Fla., by a group of unruly teenagers (FoxNews.com).

A Marine and his wife thought they they were going to have a nice date night at the movies.  But all hell broke loose when Freire had the temerity to ask the loud and disruptive teens to settle down and and have some respect for the rest of the audience.
Fox News has the story:

Freire said that when the disturbance escalated and the group began cursing, his wife called the manager, who asked several of the teenagers to leave the theater.

The couple said they thought the fracas was over until they walked out of the theater and were assaulted by a mob of menacing teenagers.

“On our way out of the movie theater, my wife gets surrounded with about 10 to 15 girls that were about to attack her,” Freire told FoxNews.com. “As soon as I saw this I immediately ran and got her out of harm’s way.”

Freire said he was kicked and punched as he and his wife tried to run from the group.

“I leaned down to grab my purse and there were literally 100 teens around us,” Kalyn Freire said, “While the manager was in the corner with his mouth open and not doing anything.”

Freire said one bystander stepped forward and told the couple to follow him to his car, saying he could scare the crowd off with a gun. But before the two reached the man’s vehicle, one of the teenagers said, “I’m going to knock your wife out,” before punching Freire’s wife to the ground, the couple said.

Deputies from the Manatee County Sheriff’s Department responded to the scene and arrested two 15-year-old brothers and charged them with misdemeanor battery.

According to a police report, three others — 16-year-old Ishmael Dunbar, 17-year-old Reginald Gardner and 20-year-old Destiny McNeil — were arrested and charged with felony battery on a law enforcement officer and trespassing.

“All available units were requested to respond to disperse the crowd for officer safety and to restore order,” the police report said. One teenager was stunned by a Taser.

What’s he fighting for, he asks.

Incidentally, Freire told FoxNews.com that reports that he was home on leave from Afghanistan were incorrect, and that he had served a combat tour in Iraq and currently was stationed at Camp Pendleton, Calif.
I know just what my mother would say about this… “Were these kids brought up in a barn?” What kind of parent brings up their children to act like wild animals in public?
Mugshot via Gateway Pundit:

20-year-old Destiny McNeil (ABC Action News)
Nice job, Destiny. You and your thug friends were going to ambush a white woman (probably half your size) because she  had you (or your friends)  thrown out of the movie theater for being loud and obnoxious while people were trying to watch the movie. Do you not understand that disruptive theatergoers deserve to be thrown out? That that alone was enough to be ashamed and embarrassed about, but you couldn’t leave well enough alone, and had to degrade yourself further?
Do you realize you and your friends have validated every negative stereotype white people have about black youths by your disgusting behavior? You should read some of the comments I’ve been reading where this story has been posted.
You’re a real credit to your race, Destiny.
–
UPDATE:
A competing story with shades of Tawana Brawley has emerged:

A 14-year-old girl who was told to be quiet by a Marine and his wife on Christmas at a local theater during a movie has filed a battery complaint with the Manatee County Sheriff’s Office.

But the sheriff’s office will not pursue the complaint, saying there were inconsistencies in the girl’s statement and that the case is closed.

“We investigated the complaint and there isn’t even enough there to send to the State Attorney’s Office,” said sheriff’s office spokesman Dave Bristow.

Her story is that Freire, who was surrounded by 100 hostile teens outside the movie theater, somehow started the fight by punching her in the lip, or something…her story is inconsistent. And as the deputy noted in his report, there was no bruising on her lip when the report was filed Tuesday.

“I just grabbed my wife with both arms and pulled her out of harm’s way,” he said. “If she wants to file false charges, she can bring it. There were plenty of witnesses.”

Bristow said the girl’s complaint will be closed out.

”At this point, it will be a closed case,” he said. “We talked to the girl and the stories are a little inconsistent. … The girl said her eyes were closed. It doesn’t add up. Someone may have bumped into her or something like that. We don’t have any evidence that someone came up and punched her.”

Bristow also noted that there were a total of 10 moviegoers from the theater that night who complained about the group of teens.

Collins’ father, Leon Collins, said he plans to file a complaint with Florida Department of Law Enforcement and plans to schedule a rally at the sheriff’s office.

Additional info about the fracas via Brandenton.com

As deputies were investigating, the manager of the theater asked anyone without a ticket to leave.

When a deputy asked 16-year-old Ishmael Dunbar to leave several times, the teenager refused and struck the deputy, according to the sheriff’s office.

At one point, Destiny McNeil, 20, a relative of Dunbar, attempted to intervene in the arrest and was arrested herself, the release said.

She was charged with resisting arrest without violence and was released from Manatee County jail Sunday on a $750 bond.

Reginald Gardner, 17, also hit the same deputy in the arm and resisted arrest after he was asked to leave the area. Gardner was stunned in the chest with a Taser by a deputy.

Both Gardner and Dunbar were charged with battery on a law enforcement officer.

The names of 15-year-old twin brothers who were charged with misdemeanor battery for striking the couple were not released. Details of misdemeanor arrests for juveniles are not public record under Florida law.

Near the end of the incident, there were about 300 people milling around, according to authorities.

All available deputies were asked to come to the theater to help restore order, the release said. The manager then shut down the location.

A manager at the theater said thousands of dollars in refunds were given to patrons.

Normally, one to two off-duty law enforcement officers from state agencies are hired to work security on weekends. On Christmas night, no one was available, according to theater management.