Madison resident, Joseph Storkson called into the Bill Cunningham Show, last night, and described what he saw at the protests on Saturday. He took 200 photos of both sides and posted them on Facebook. Here are a few pictures you won’t see in the Make-Believe media:

Cute. And these folks are “for the children”, right?

Free Speech for me but not for thee .

Remember the media attention that was given to Dem La Rouchies when they showed up at Tea Parties with Obama/Hitler posters, and the liberal outrage that ensued? When an Iowa Tea Party group linked Obama to Hitler and Lenin, libs had fainting fits, and the media pounced. Something tells me, however, we won’t be hearing any protestations concerning their comrades in arms’ liberal usage of Hitler images in Madison. As the past ten years have demonstrated, it’s always okay to make Hitler comparisons when they’re directed towards Republicans. 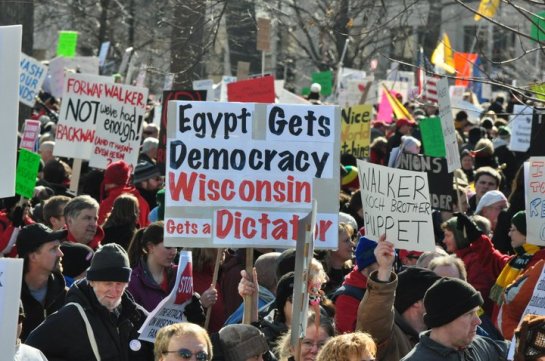 New left-wing definition of Dictator:  Democratically elected, and doing the will of the people. 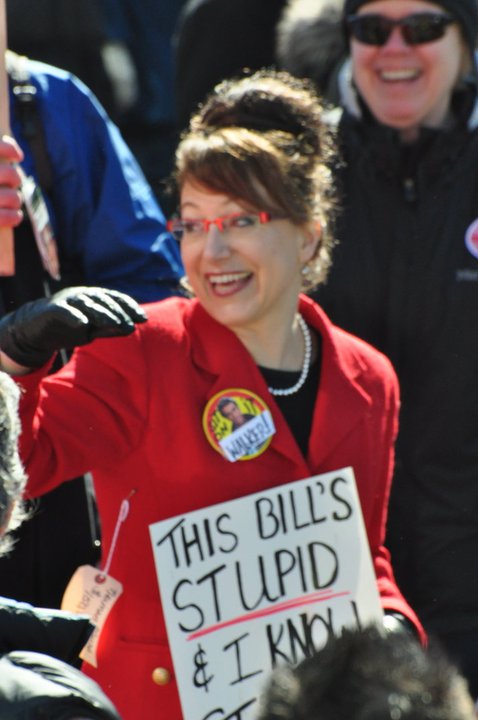 Oh, haha, I get it – – because Sarah Palin is stupid. So clever! So breaking new ground .

This guy’s obviously not an art teacher:

How about you show up for work? That might help…

Please tell me this next one isn’t a teacher:

Via The Daily Caller: ‘Morning Joe’ makes startling discovery: The media has a liberal bias

Linked by The Jawa Report, and POH Diaries, and Michelle Malkin, and The Other McCain, and UrbanGrounds, and Moonbattery, thanks.