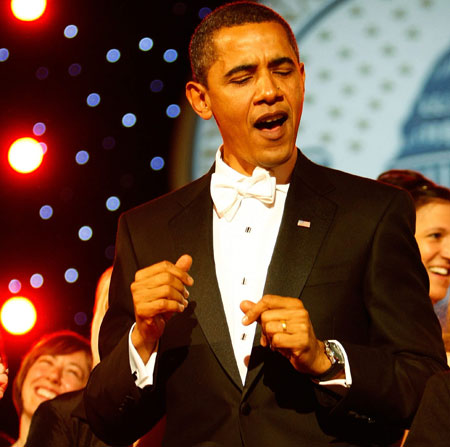 That’s John Hayword at Human Events unloading on Obama for his risible smear against the Bush administration, yesterday:

Speaking in Chile to defend his decision to launch Operation Odyssey Dawn, President Obama couldn’t resist taking a swipe at George Bush, in a clumsy attempt to make himself look superior.

As reported by Fox News, the President declared: “In the past there have been times when the United States acted unilaterally or did not have full international support, and as a consequence typically it was the United States military that ended up bearing the entire burden.”

As the folks at Fox quickly pointed out, Bush actually had twice as many international allies for the invasion of Iraq as Obama has put together for his adventure in Libya.  They even put together a list.

Serious questions are being asked about the long-term objectives of Odyssey Dawn, how much of it we’ll be expected to pay for, and whether promises to avoid the commitment of ground forces will be kept.

Against this backdrop, Obama decided to throw out an offhanded smear of his predecessor… a slander so transparently false that it was debunked within minutes?

That’s a disconnect with reality so profound that it verges on mental illness.  It also highlights just how half-hearted and poorly thought out this decision was.

The President has a massive staff and an enormous political team, but apparently no effort was made to put together a comprehensive response to critics of Libya policy.  Nobody gamed out the scenario, considered the most predictable developments, and developed comprehensive, well-researched answers to likely challenges.  Instead, it was Improv Night in front of a brick wall in Chile, and the President decided to haul out the old joke about Bush the Unitary Executive.

The President’s comment demonstrates an appalling lack of knowledge about the Iraq war.  He ran as an outspoken opponent of Iraq, Afghanistan, and Guantanamo Bay… but has continued all three, and now added Libya.  It would seem his campaign criticism was not informed and intelligent opposition, but rather a general conviction that George Bush is the devil, and anything he did should be mindlessly denounced from every possible angle.

I’ve said on a number of occasions, (and only half joking), that sometimes it seems like we are being governed by left-wing trolls. This latest idiotic quip from the President only strengthens that perception. How many times did conservative keyboard warriors have to slap down that stubborn little misconception during the Bush years? It was one of those cute little left-wing lies that was believed without question by the faithful, but made little sense, and could be easily checked.

The fact that we have a President of the United States who would peddle this contemptible bull to prop himself up is atrocious and depressing.

Donald Rumsfeld reminds us that as far as Bush is concerned,  maybe a “thank-you” is in order?

Hot Air: Rumsfeld: If you’re wondering who to thank for Gaddafi’s lack of nukes …

Moammar Gaddafi’s decision to voluntarily surrender his nuclear-weapons program made the US significantly safer as a direct result of the Iraq War.  Had we not invaded Iraq in 2003 and captured Saddam Hussein in December of that year, Gaddafi would hardly have felt compelled to protect himself from similar American action at the time.  We found out shortly afterward that Libya had succeeded in making weapons-grade plutonium, and oh by the way also had 44,000 pounds of mustard gas.  In fact, Gaddafi’s rush to demonstrate his good citizenship only ended in 2007, when domestic opposition to Bush’s efforts in Iraq emboldened Gaddafi back into defiance.

Lady Penguin at United Patriot: Whatever Happened to Barack Obama?

Many of us knew in 2008 that an individual without a past, with the ardent support of the Left, had been packaged by Madison Avenue and sold to the American people.  Now he is our president.  How far back and how deep this goes, only the future can reveal, but the results of that election are going to haunt us for decades.  So, while the questions remain about who and what this man is, unfortunately, the answers remain the same.

Barack Obama is an individual who was groomed for this time, a product of his Leftist upbringing, but malleable in that he believes in his own deified status; still, a man unable to lead, and unable to engage in a way that makes sense to the American people.  There is a disconnect, and he appears disconnected; he doesn’t react or behave as we expect him to; he really doesn’t feel our pain, because, quite simply – he can’t.  There is a psychological component, as well as ideological basis for this belief.

We should no longer beat our heads against the wall – asking the unthinkable, “How can this man be our president?”  All we can do, and must do, is know that in 2012 we must elect an individual who is everything Mr. Obama is not.  The answer to the title, “Whatever happened to Barack Obama?”  The answer…”Nothing.”  He is exactly what he always was, a Marxist who wanted to transform America; he is a man who has nothing in common with her, nor does he accept  what is beautiful about this nation – her exceptionalism.  No matter how the MSM spins the next two years of this presidency, we must remember that while Mr. Obama is entitled to be himself, it should not be at the expense of the American people.

And on a lighter note…