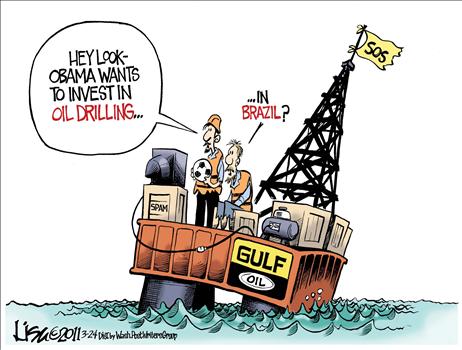 Once again, my open tabs have reached critical mass, so it must be time for another link-around.

I’ll start off with Harry Reid, who can be always be relied upon to jump on any left-wing bandwagon, the dingier the better:

And while we’re on the subject of the Koch’s, John at Powerline penned today’s  must-read: Anatomy of a Smear:

The Center for American Progress is generally regarded as a front for the Obama administration. Its President and CEO is John Podesta, formerly Bill Clinton’s Chief of Staff and the chairman of Barack Obama’s transition team. CAP is lavishly funded by George Soros and several other left-wing billionaires. It runs, among other things, a web site called Think Progress, which cranks out a steady stream of slimy hit pieces for the benefit of the Obama administration and the far left.

Soros apparently believes that only left-wing billionaires should be able to participate in public discourse, so his Center for American Progress, through its web site, has carried on a bizarre vendetta against Charles and David Koch and their company, Koch Industries. The Kochs are two of the very few billionaires who are active in politics on the conservative/libertarian side, a phenomenon that apparently drives left-wing billionaires wild with rage. I’m not sure why; maybe they think the Kochs are traitors to their class. In any event,Think Progress has stalked the Koch brothers with video cameras and produced one false, over-the-top attack on the Kochs after another, some of which we have had fun dissecting here.

As part of its ongoing obsession with all things Koch, Think Progress has attacked Congressman Mike Pompeo, who represents Kansas’ 4th Congressional district. Wichita, where Koch Industries’ headquarters is located, is in the 4th district. The 4th district seat was open in 2010, and Pompeo was the Republican nominee. Not surprisingly, the Koch brothers, who are Republicans, supported Pompeo, as did many Koch employees. (Koch Industries employs well over 2,000 people in the 4th district.) The 4th is strongly Republican, and Pompeo easily defeated his Democratic opponent, Raj Goyle, with 59 percent of the vote.

Another high profile target of the left, lately is media provocateur, Andrew Breitbart:

Admitted Marxist Van Jones and his group, Color of Change, succeeded in fascistically booting Andrew Breitbart from ABC’s election night coverage yet hit a wall today when their attempt to again silence diverse voices was rebuffed by the Huffington Post.

Hey, did you know that the reason libs fail so epically in televised debates even when they totally “win” on the merits is because of  their  lack of command of such “Non-verbals”  as the “furrowed brow “and “raised brow”.

Thank God Media Matters is offering a boot camp to teach progressives how to master these important skills:

John at Powerline Liberals: Too Smart For Their Own Good?:

It is true that liberals tend to lose arguments. One obvious explanation for this is that their ideas are poor ones that tend to be unsupported by facts. But Media Matters adopts the opposite theory: the problem, wouldn’t you know it, is that liberals are too smart!

The problem for the soldiers of the left, according to Media Matters instructors, is that they are just too smart for their own good. The traditional dependence on facts and figures, on being right, is no longer germane. Too often these wonks disappear into the policy weeds or fall through the cracks of nuance.

Well, if these folks really are too smart, they have come to the right place. Media Matters can dumb them down in no time! In fact, the dumbing down process seems to be well under way:

Media Matters, too, is embracing the notion of television debate as performance art. The PTI program is in part conceived by Joel Silberman, a Democratic media trainer and former cabaret singer, who says things like “actors speak louder than words,” “heart, persona, presence” and “feeling wins.” The instructors at the carriage house spend an entire day emphasizing “nonverbals.”

The participants studied “strength and warmth inventory” handouts (“furrowed brow” for strength, “brow up” for warmth). They learned to avoid licking lips, tilting heads and rubbing one hand against the other.

What kind of humorless drone must you be  to need training on eyebrow movement.

The cat is now out of the bag on the left’s eye-brow tricks.

HEH, Red Eye’s on this story…

The Obama Way: Winning the future…one unwieldy, purpose-evading euphemism at a time.

Content warning – this will be the most vile thing you’ve seen in a long while, (or at least since the last pro union protest).

In what seems to be a weekly, if not daily, number of protest marches around the globe recently, this weeks’ March 26th “March for the Alternative” is the latest effort to stir the pot from the global powers-that-be. As we have discovered in recent weeks and months, these movements and revolutions are given the appearance of the grassroot actions of frustrated citizens of the world, yet they always seem to come back to the same handful of people and groups.

The “March for the Alternative” is being well publicized by Movements.org (you know, the same people who work so well on revolution with Google and the State Dept.). This is how they introduce us to the latest.

Government lawyers filed the religious discrimination suit in December on behalf of Safoorah Khan, The Washington Post reported Wednesday. Khan quit her job in Berkeley, a suburb of Chicago, when she was refused time off to make a pilgrimage to Mecca.

Critics say Khan was requesting a three-week absence, well beyond the usual accommodation to employees’ religion, and the Justice Department should not have become involved. They suggest the Obama administration filed the lawsuit in an effort to reach out to U.S. Muslims.

Word around the Beltway has it that longtime Democrat operative Jamie Gorelick is one of the favorites for the FBI director role under President Obama. What could possibly go wrong?

Obama to Russia: Why, Of Course I’m So Determined To Secure Your Signature on a Meaningless Piece of Paper That I’d Gladly Hand Over the Secrets of US Anti-Ballistic-Missile Technology, So You Can Learn How To Defeat It

The Blaze: What is Economic Terrorism and is Labor Radical Stephen Lerner Guilty of it?

Economic terrorism was also the subject of a just-released report commissioned by the Pentagon in early 2009. The report blames economic terrorism–targeted financial strikes on the U.S. economy and by U.S. enemies–for the financial meltdown of 2008. “That the economic crisis was an intended purpose of a specific financial attack perpetrated by one or more actors driven by a combination of motives.”

In his speech, Lerner discusses causing “a new financial crisis.”

Why I’ve never heard of this guy, C. Steven Tucker is a mystery to me, because an asset like this to the conservative cause should be known to everyone. As an “evil health insurance broker”, he has an encyclopedic knowledge of health care  issues, and he knows how to employ that knowledge in a debate.  At this small rally supporting Republican Rep Rand Hultgren (IL-14), he challenged anyone from the group of counter-protesters to debate him on ObamaCare. There were no takers at first, but then an earnest young man appeared. iOWNTHEWORLD”s Big Fur Hat, (from whom I swiped this video) had a much harsher take on the guy than I did. I thought he was very civil, listened to Tucker’s arguments patiently, and made his counterpoints respectfully. The tea partiers were equally respectful. And there was common ground on a few of the issues. People like this young man can be reached.

If you have a half an hour to spare, this video is well worth your time. This is what dialogue is supposed to look like:

Unfortunately, the introduction of union reform bills in State Houses across the nation, have afforded us example after example of what dialogue is not supposed to look like. As pro-union demonstrators protested the bills, a few brave conservatives  attempted to do their own counter-protesting, only to be harassed, threatened, shouted down, sworn at, and called epithets like Koch-sucker, and fascist. Some have been physically attacked.

A reminder of how much respect a leftist mob affords a counter protester expressing a differing opinion:

C. Steven Tucker notes in the comments at iOWNHEWORLD:

Our “soul patched” friend was indeed a liberal. Worse yet, an “Organizing For America” Liberal. They were commissioned by OFA with the following notice from the “Kane County Democrats”:

Hultgren Office Visit
Affordable Care Act Anniversary Event
Organizing For America is doing events next week in honor of the one-year anniversary of passing the Affordable Care Act. The Affordable Care Act is making it possible for an additional 32 million Americans to receive health insurance. Randy Hultgren and the other Republicans are trying to repeal and defund Obama’s health care act and we want to let him know how we feel about that. Join the Kane County Democrats and OFA on Tuesday, March 22nd at 2:00 pm, as we visit Randy Hultgren’s office to show our support for the Affordable Care Act and to let him know that if he continues to attack health care reform, his constituents will hold him accountable in 2012. To sign up on the OFA website, click here: http://my.barackobama.com/page/event/detail/gpzjtw/?override_wrapper_id=Cw3hs

Linked by Hyscience, thanks.

You are going to love this:

I ain’t gonna work till you get me a perk.
I want my medical insurance given to me free.
I got to have a bigger salary.
You got to give me more. C’mon and give me more!

Seniority is security.
I get a big fat pension when I’m 55,
so I can suck up all the taxpayers dry.
Got to give me more. C’mon and give me more!

Solidarity is democracy.
If I don’t get my collective bargaining right,
I’m gonna shut you down with all of my might.
You got to give me more. C’mon and give me more!

Here’s your campaign donation, Mr. Senator.
I got tenure, just try and get rid of me!

Cross-posted at The Minority Report and NewsReal.