Emails released by the office of Senate Minority Leader Mark Miller (D-Monona) show how Democratic senators sought to explain their unusual action to drive to Illinois to block a vote on Walker’s measure, which would end most collective bargaining by public employee unions. The measure ultimately passed the Legislature but is now facing legal challenges.

One of people offering suggestions to Senate Democrats was Blaine Rummel, a spokesperson from the national office of the public workers union AFSCME, also known as the American Federation of State, County and Municipal Employees.

Rummel sent an email marked “TPs,” for talking points, to Miller spokesman Mike Browne late in the evening of Feb. 17 after Senate Democrats had crossed the state line that morning.

Also that day, Rummel had helped coordinate AFSCME’s opposition to the bill in Wisconsin, speaking to media outlets like the Milwaukee Journal Sentinel.

Rummel sent the talking points to the personal email of Miller spokesman Mike Browne, but the email turned up in an open records request by the Journal Sentinel because it was forwarded on to Miller’s official email account.

“We’re on the job. The fact is, Wisconsin legislators are sworn to protect people’s rights, not take them away. And we are fulfilling our oath,” one of the talking points reads.

Note, these are the same people who paint Governor Walker as a “Koch puppet” because he accepted campaign donations from the big,  bad, nasty, greedy capitalists. If I remember right, when Walker took that hoax Koch call, he spent 20 minutes politely telling who he thought was a big donor, what he was up to. Not the other way around.

Linked by Michelle Malkin, thanks. 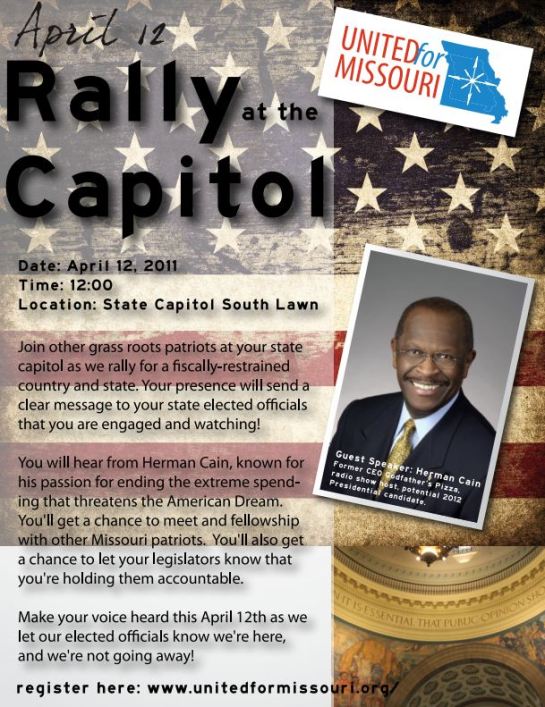 We are pleased to announce that Herman Cain will be our keynote speaker for the event!  Herman Cain has a unique personality and multi-dimensional background in business, politics and life. Herman Cain is an accomplished speaker and writer on the subjects of leadership, motivation, national and economic policy, politics, and achieving one’s American Dream. Herman Cain understands that it’s not government that “grants” the American Dream – it is individuals who obtain it – despite government’s “help”!

We anticipate a large crowd to gather at the Capitol on that day.  Invite your friends, neighbors and family to attend this event.  I’m excited to hear what Herman Cain will be sharing with our group. Come prepared to hear the truth – not to have your ears tickled!

After the event is concluded, we encourage you to go inside YOUR state capitol and let your legislators know you are watching!  Register for the event here: United for Missouri Capitol Tax Day Rally

To find the tax day tea party nearest you, use Freedomworks’ FreedomConnector.

(That one appears to have been canceled.)

Americans For Prosperity has an event scheduled for tomorrow, Wednesday, Apr 6:

Where: Washington, DC at the Capitol (map)

DescriptionCut Spending Now Event at the Capitol We cannot continue to spend our way out of debt. We need to take the first step toward financial stability and Cut Spending Now. Hardworking taxpayers like you already feel the burden of “spend now, pay later” politics. It’s time that spend-crazed politicians in Washington feel the pressure too. Join us Wednesday, April 6th in Washington, DC to tell the Budget Committee to Cut Spending Now. They need to hear from you as they crunch numbers and grapple with this year’s budget. You’ve had to tighten your family budget in this struggling economy. They should have to tighten the national budget too. Confirmed Speakers: Michele Bachmann *food will be provided

I  heard Dick Morris talking about shutting down the government on Hannity, last night. He says it’s a “stupid, false choice” to either accept the compromise in the Senate, or shut down the entire government. He says Republicans should only shut down the parts we don’t like:

…the Republicans should refuse to accept less than $61 billion in cuts and — if the Senate and Obama refuse — should target for shutdown a handful of specific and highly unpopular programs and agencies. Why shut down the entire government? Zero fund the State Department or Agency for International Development, thereby suspending all foreign aid. Zero fund the Bonds for America program where the feds pick up the local debt service payments for states and cities. Zero fund the Highway construction program. Any combination of some of these cuts can easily generate $61 billion in cuts (less the $10 billion already cut).

On the Laura Ingraham Show, today, Laura advocated a complete shutdown of non-essential services. She notes that would be a good way to find out which jobs should be cut. Those folks can find work in Obama’s “recovering” economy.

Doug Ross agrees that that’s the way to go:

The problem is two-fold for Democrats.

Most Americans, who realize the government has a disastrous spending problem, support a shutdown of non-essential services.

Second, the longer taxpayers realize a shutdown actually benefits them — and has no visible impact on their lives — the worse a public relations problem it becomes for the Pelosi Party.

It ain’t 1995, Mr. Speaker. In the spirit of bipartisanship, let the Democrats shut the government down.

Treasury Secretary Geithner is not happy the Republicans have held the debt ceiling hostage to budget negotiations. In response, Geithner has embarked on a fear mongering campaign via a Debt Limit Letter to Congress promising financial Armageddon if the debt ceiling is not raised.

Mish’s advice to Republicans?  Come up with a polite way of saying, “Go to hell”:

If Geithner really believes what he is spouting, Republican ought to take advantage. They can do so far more politely than I suggested.

A politically correct “polite” response would be along these lines:

In the vital interest of preserving the US dollar and to restore fiscal sanity to the United States of America, we intend to reduce the budget deficit within 10 years.

In the interim, we will not increase the debt limit unless and until the President and Congressional Democrats are willing to cooperate.

In return for raising the debt limit, Congress must pass and the the president must sign legislation that will…

Given the unmistakable sincerity in your assessment of the damages that may occur should Congress fail to increase the debt ceiling, we anticipate equal sincerity in your willingness to work with Republicans to balance the budget in 10 years so that Congress will not have to go through these maddening debt-ceiling exercises in years to come.

We await your reply and look forward to working with the Obama administration towards solving our budget crisis.

“Yes We Can” work together.

Ryan today is rolling out a polished presentation of his plan, which he calls the “Path to Prosperity.” (Read it below.) With explanations on opinion pages and on YouTube, the GOP is readying for the political attacks that will surely follow as they attempt to revamp popular and vast health care systems.

Ryan’s budget proposal aims to slash $6 trillion from the budget over the next 10 years. It would in part accomplish that by changing Medicaid — which serves low-income families — from a government-run insurance program to a system of block grants distributed to states.

Medicare, a government-run health care program for those over 65, would essentially turn into a “premium support” program — the government would essentially provide vouchers for health care, but the funds would go directly to the insurer rather than the consumer. The government would give private health insurers a set amount of money to cover senior citizens. The change to Medicare would go into effect in 2022 under the plan.

It’s a risky proposal politically, given Medicare’s overwhelming popularity, but Ryan and the GOP are prepared to argue the changes are necessary.

“This is a plan not only to pay off our debt over time, but to get the budget under control to keep the government going,” Ryan said on the CBS’ “The Early Show” today. Ryan said his Medicare plan is modeled after the government insurance program offered to congressmen.

Geoff at AoSHQ: Ryan’s Plan: Necessary But Not Sufficient:

Paul Ryan released his new deficit-cutting budget plan today, saving almost $6 trillion over the next 10 years, which is very nice. Really. The National Committee on Fiscal Responsibility and Reform released a similar plan last December, saving almost $2 trillion by 2020, and it too was nice.

Despite my tone, I am a big fan of these plans, and earnestly hope that at least most of their features will be implemented. But lest we violate the guiding maxim of the estimable Winston Wolfe, let’s remind ourselves of exactly how bad things are, so that we understand just what these plans can and can’t do for us.

On FoxNews. The White House just called to say it was going to play the government shutdown card, despite an offer on the table to keep the government going for another week.

Of course, this newest one-week budget contained $12 billion in cuts (and would have funded Defense throughout the year, and defunded Planned Parenthood).

So, the Democrats are going to shut down the government.

I say shut her down and let the chips fall where they may.

Linked by Michelle Malkin, thanks.