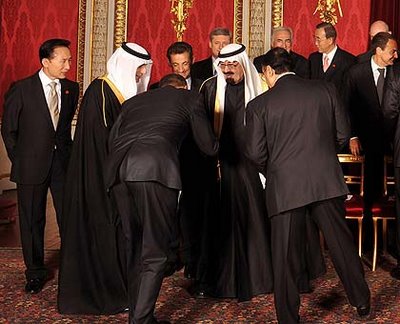 Charles Krauthammer takes Obama to task for his “doctrine” of “leading from behind”:

It is the fate of any assertive superpower to be envied, denounced and blamed for everything under the sun. Nothing has changed. Moreover, for a country so deeply reviled, why during the massive unrest in Tunisia, Egypt, Bahrain, Yemen, Jordan and Syria have anti-American demonstrations been such a rarity?

Who truly reviles America the hegemon? The world that Obama lived in and shaped him intellectually: the elite universities; his Hyde Park milieu (including his not-to-be-mentioned friends, William Ayers and Bernardine Dohrn); the church he attended for two decades, ringing with sermons more virulently anti-American than anything heard in today’s full-throated uprising of the Arab Street.

It is the liberal elites who revile the American colossus and devoutly wish to see it cut down to size. Leading from behind — diminishing America’s global standing and assertiveness — is a reaction to their view of America, not the world’s.

Other presidents have taken anti-Americanism as a given, rather than evidence of American malignancy, believing — as do most Americans — in the rightness of our cause and the nobility of our intentions. Obama thinks anti-Americanism is a verdict on America’s fitness for leadership. I would suggest that “leading from behind” is a verdict on Obama’s fitness for leadership.

Leading from behind is not leading. It is abdicating. It is also an oxymoron. Yet a sympathetic journalist, channeling an Obama adviser, elevates it to a doctrine. The president is no doubt flattered. The rest of us are merely stunned.

This is why Trump totally jumped the shark when he said Charles Krauthmmer was a “sad fool”. A sad fool is someone who calls everyone who disagrees with him, “stupid”, and gives speeches laced with F-bombs.

So, our elected representatives in Congress may pass a law and a president may sign it, but if Obama decides — absent any Supreme Court ruling — that the law is unconstitutional, out it goes.

It all boils down to this: Are we to be a constitutional government with three distinct branches, or a single executive entity that makes policy, carries it out and decides for itself whether it’s constitutional or not?

That’s what the next presidential race is really all about.

3 thoughts on “Your Read of the Day: Krauthammer On Obama Doctrine”