The entire Kansas City area was under a tornado warning at one point, and there were brief touchdowns of small tornadoes reported throughout the late morning and early afternoon. School kids in the greater Kansas City area got to put their tornado drill training to use, today.

At 12:59PM  KMBC meteorologist, Gary Lezak reported that as many as 12 to 14 tornadoes had touched down in Kansas City within a span of 90 minutes.

East of KC, Sedalia MO, home of the Missouri State Fair, appears to be the town most severely affected by the damaging storms that passed through Western Missouri, earlier today.

Clayton Wright said he and his wife, Gloria, were in their home in the 3400 block of Stewart Avenue in the neighborhood, which is south of 32nd Street east of U.S. 65.

They had just heard on the radio that they should take cover when debris started hitting the house, shattering windows and breaking a tree limb, Wright said.

“I’ve never been in a tornado before so I didn’t know what it would sound like,” Wright said. “It sounded like an engine roaring.”

The debris struck their house just as they were headed downstairs to safety.

“It happened so fast … so fast,” Wright said.

After the tornado passed, Wright said they emerged from the basement to survey the damage.

“There is a lot of damage,” Wright said. “Tree limbs are down. Tops of houses are gone. There is even one house that is missing.”

Wright said there was also a smell of natural gas.

Neighbors came from their homes and checked to make sure no one was injured.

“So far, everybody in our neighbor is OK,” Wright said. “At least that is what I know right now.”

He said trees were down, blocking roads, and emergency crews were just arriving to the area.

The tornado was part of a storm system that swept across the Kansas City area. It produced a tornado that caused significant damage to numerous homes and businesses, about one mile southeast of Sedalia in Pettis County, according to authorities.

The Pettis County Sheriff’s Department reported injuries and damage but was assessing how severe they were.

Another pic via Kansas City.com:

See video of the extensive damage in Sedalia at NBC Action New. com.

At least 15 people have sustained  minor injuries in  Sedalia.

Another pic via The Missourian:

Joe Horacek of Sedalia surveys the damage to his neighborhood shortly after a tornado sliced through it Wednesday. Horacek said he got sprayed with glass and debris when he looked out a window after hearing the wind and barely made it to the safety of his bathroom. His home, shown in the background, “is gone,” he said. 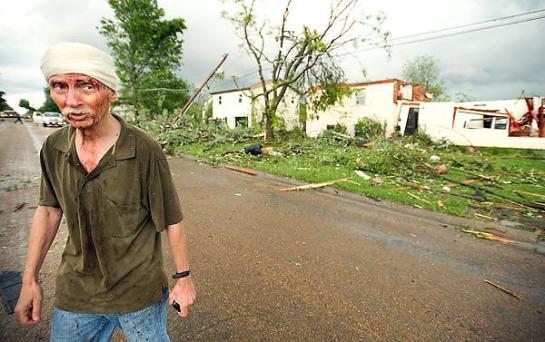 Gateway Pundit has a report with exciting video from the Eastern side of Missouri: St. Louis Hail Storm Shatters My Patio Table As I Am Filming It (Video)

That death toll may get much much bigger.

9 thoughts on “Tornado Hits Sedalia MO, Heavy Damage In Parts Of The City, No Deaths Reported”