Maryland’s Socialist, pro-illegal immigrant Governor Smarmy O’Malley had all his ducks in a row, Sunday morning on ABC’s This Week, starting right off with these hackneyed WH supplied talking points — “we need a “balanced approach”,  “investing in the future”, tea party “extremism”, “obstructionism”. Like most Dems, he was long on focus group approved talking points, but short on substance. After Sessions responded with facts and figures, O’Malley tried to pivot to jobs, while schizophrenically slamming Republicans for “worshiping at the altar of the false gods of tax cuts” – WTF?:

“When you have a Democratic Senate that will not produce a budget – 830 days without a budget – a president who submitted the most irresponsible budget in history, who is continuing to talk about spending and investing more, whose Secretary of Education was demanding a 13% increase in the Department of Education next fiscal year, beginning October 1st, you know we’re in denial.”

“The president is going to have to look the American people in the eye and tell them we are on an unsustainable course…And if he asks us to reduce spending by 10% across the board, all departments and agencies, congress would rally to him in a bipartisan way. But if he’s going to deny we have a crisis, he’s not going to have bipartisan support.”

“Raising taxes is what the president’s balanced plan means. That’s plain to every American by now. The Administration wants to raise taxes so they can permanently implant a larger level of spending. We’ve got to bring spending down, not increase the burden on the private sector.”

“The debt is pulling down growth and costing us jobs. The debt-to-GDP ratio that is now 100 percent is hammering our economy…that’s why we’re having the unexpected decline in growth that we’ve seen the first half of this year.”

I wish he had noted that Republicans in Congress are and have been willing to reform the tax code and close tax loopholes.

“I do believe that committee can function and be successful in the limited goal we’ve given them. S&P is saying it is not enough. It’s only about $2 trillion in cuts or a little over, when we’re going to increase our debt in the next ten years by $13 Trillion. So that’s why they’re concerned. The plan is insufficient, even if successful.”

I also wish Senator Sessions had pushed back on O’Malley’s anti-tea party smears with something along the lines of:

“Excuse me, but those people happen to represent all Americans who want to see deep cuts in spending, a balanced budget passed by Congress, and an end to government regulations that are strangling the economy, AKA THE MAJORITY OF AMERICANS. You smear them at your own peril sir. They will remember all of these spurious attacks in 2012 and will be out in full force.

The reason why it’s so important to push back on this particular bit of Dem message coordination, (I  disagree with Sir Charles on that point), is because Dems know that if they repeat a lie often enough, a substantial number of people will eventually believe the lie. Thus the constant drumbeat: “Tea party extremist, tea party radical, tea party terrorist, tea party suicide bomber…” etc. They are looking ahead to 2012, and want the general public to view the tea party as anti- American thugs. 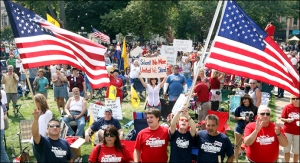 Sessions has done a great job defending the tea party in recent days, so we’ll forgive him for this one oversight.

O’Malley ended on this totally made up “historic economic fact”: “A modern economy requires modern investments to create jobs, and that’s what we need to be about.” In other words, a government command/control, over regulating,  top-down economies – picking winners and losers…….. creates jobs. History (and common sense) shows us precisely the opposite.

Why do Maryland voters keep voting for this guy?

A piano solo of the classic hymn, “Amazing Grace”, beautifully played by Dr. Eric J. Littleton, “performed in a completely different arrangement specifically designed to draw attention to the melody in a fresh way”