New photos have been uncovered showing then Senator Obama sharing the same podium at the event with the New Black Panthers.

In the first image, Shabazz stands at the podium, surrounded by uniformed Panthers, including Muhammed.

In the second photograph, Obama commands the same podium. 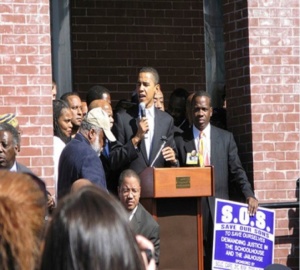 Andrew Breitbart (who else!) has the scoop:

New photographs obtained exclusively by BigGovernment.com reveal that Barack Obama appeared and marched with members of the New Black Panther Party as he campaigned for president in Selma, Alabama in March 2007.

The photographs, captured from a Flickr photo-sharing account before it was scrubbed, are the latest evidence of the mainstream media’s failure to examine Obama’s extremist ties and radical roots.

In addition, the new images raise questions about the possible motives of the Obama administration in its infamous decision to drop the prosecution of the Panthers for voter intimidation.

The images, presented below, also renew doubts about the transparency of the White House’s guest logs–in particular, whether Panther National Chief Malik Zulu Shabazz is the same “Malik Shabazz” listed among the Obama administration’s early visitors.

The book exposes Obama administration corruption far beyond the Panther dismissal, and reveals how the institutional Left has turned the power of the DOJ into an ideological weapon.

Adams’s book also describes, in detail, the Selma march at which then-Senator Obama was joined by a group of Panthers who had come to support his candidacy.

Breitbart alleges that there are even more photographs. And he has some questions for the White House:

I have been calling for the White House to disclose which Malik Shabazz visited the private White House residence on July 25, 2009, two months after the DOJ voter intimidation case was dismissed.  So far, the White House has refused to do so, leaving open the question of which “Malik Shabazz” appears in visitor logs released to the public.

To reiterate: nobody, including Adams, is suggesting that Obama is a secret member of the New Black Panther Party. At a minimum, however, the events in Selma expose the media double standard that has buried this story until this week.

The mainstream media should ask Obama a few questions before they rush to his defense:

What did he and Malik Zulu Shabazz say when they conversed that day–something that Shabazz has said happened?

Did the Obama campaign play any role in having the Panthers travel to support his presidential ambitions?

Who posted the Panthers’ endorsement on the Obama campaign’s website, and at whose instructions?

Who–finally–was the Malik Shabazz who visited the White House residence on July 25, 2009?

Read the full report at Big Government, as there are some important points I didn’t excerpt.

I can tell you what the official position of the Obama Camp back in 2oo8 was re the New Black Panthers endorsement on his website. I remember it well, because I blogged about it.

So Fox News evidently decided to pore through our millions of user-created pages on My.BarackObama.com and put a screenshot of inflammatory content on the front page of FoxNews.com.

You see, more than 700,000 people have created accounts on the system. You can create one right now if you choose, in about a minute — anyone can.

Now, from time to time people get up to no good — creating fake profiles (like one for Sean Hannity created today), or posting profane or inappropriate content. When they do, the community reports the offending content and if it violates our terms of service it is removed (as the Sean Hannity profile was).

My.BarackObama.com has been at the core of our bottom-up organizing strategy. The tools available have been put to work by a community of supporters that is bigger and more powerful than anything presidential politics has ever seen.

Evidently, Fox News didn’t think it was a big deal that hundreds of thousands of ordinary Americans are participating in the democratic process creating groups and local events in communities all across the country.

But they did think it was a big deal that one random person on the Internet, without the knowledge of the Obama campaign, posted a profile in the system with the image of the New Black Panther Party on it.

When we were alerted of the existence of this page, we pulled it down. Yet even after we pulled the page, Fox News continues to disingenuously and prominently feature this “story” on their homepage.

One problem with that – WND ‘s Aaron Klein had interviewed NBPP national chairman, Malik Zulu Shabazz, the day before. He had confirmed his organization’s endorsement of Obama.

Malik Zulu Shabazz, NBPP national chairman, who has given scores of speeches condemning “white men” and Jews, confirmed his organization’s endorsement of Obama in an interview with WND today.

“I think the way Obama responded to the attack on him and the attempt to sabotage his campaign shows true leadership and character. He had a chance to denounce his pastor and he didn’t fall for the bait. He stood up and addressed real issues of racial discord,” stated Shabazz.

Shabazz boasted he met Obama last March when the politician attended the 42nd anniversary of the voting rights marches in Selma, Ala.

“I have nothing but respect for Obama and for his pastor,” said Shabazz, referring to Jeremiah Wright, Obama’s pastor of nearly 20 years.

It is Wright’s racially charged and anti-Israel remarks that were widely circulated last week, landing the presidential candidate in hot water and prompting Obama to deliver a major race speech in which he condemned Wright’s comments but not the pastor himself.

Speaking to WND, Shabazz referred to Obama as a man with a “Muslim background, a man of color.”

Speaking to WND, Shabazz said aside from promoting black rights, he also supports Obama because he may take what he called a “less biased” policy on the Israeli-Palestinian conflict.

“I have hopes he will change the U.S. government’s position toward the Israeli-Palestinian conflict because our position has been unwarranted bias. Time and time again the U.S. vetoed resolutions in the U.N. Security Council condemning [Israeli] human rights violation. … I hope he shifts policy,” Shabazz said.

So we already know the official answer to, “Who posted the Panthers’ endorsement on the Obama campaign’s website?” It’s  “Some anonymous crank, you sillies!”, but I think we know better. It doesn’t really matter who posted the endorsement, anyway — Shabazz clearly endorsed Obama in that interview.

It was a “story”, all right. The MSM (other than Fox) did a huge disservice to the American people by not covering it.

Lee Stranahan, Big Journalism: Who Is the New Black Panther Party? What Media Matters and the Obama DOJ Don’t Want You to Know

This is a shocking story, and a breathtaking indictment of the mainstream media which went out of its way to avoid vetting Obama as a candidate — and to make sure anyone who tried to do due diligence got no sunshine. A candidate who chose to appeared in the company of, say, the KKK, would have provoked relentlessly hostile media coverage and, in short order, have been marginalized as disqualified to hold responsible elective office. As Andrew points out, one of those present with Obama was Najee Muhammed, the Panthers’ “minister of war” who had called for Georgia police officers to be murdered. Yet, the press buried the Obama/Panthers connection. For example, after initially mentioning the presence of the Panthers, NPR omitted Panther references from its subsequent coverage.

Linked by Gay Patriot, thanks!

Shock Audio: Malik Zulu Shabazz Crows about Meeting With the “A-Man From Iran”: “The Kingdom of Heaven (For The Black Nation)…Will Be Seen Right Here Before Your Very Eyes”

Whistleblower Details Lawlessness and Hostility Toward Equal Enforcement Of The Law In Obama Justice Dept.

Why Would The DOJ Dismiss The Charges Against The New Black Panthers?