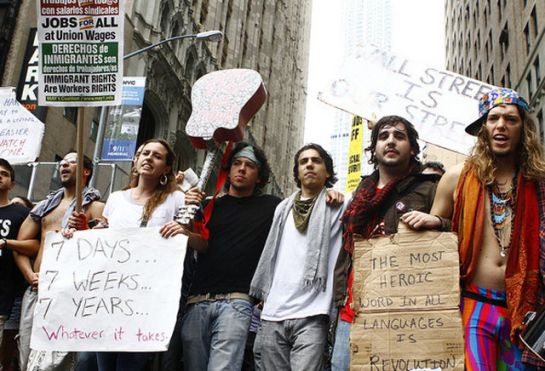 al-Reuters finally admits what many of us have been reporting for weeks:

The Hungarian-American was an early supporter of the 2008 election campaign of Barack Obama, who will seek a second term as president in the November, 2012, election. He has long backed liberal causes – the Open Society Institute, the foreign policy think tank Council on Foreign Relations and Human Rights Watch.

According to disclosure documents from 2007-2009, Soros’ Open Society gave grants of $3.5 million to the Tides Center, a San Francisco-based group that acts almost like a clearing house for other donors, directing their contributions to liberal non-profit groups. Among others the Tides Center has partnered with are the Ford Foundation and the Gates Foundation.

Adbusters, whose magazine has a circulation of 120,000 and which is known for its spoofs of popular advertisements, came up with the Occupy Wall Street idea after Arab Spring protests toppled governments in Egypt, Libya and Tunisia, said Kalle Lasn, 69, Adbusters co-founder.

“It came out of these brainstorming sessions we have at Adbusters,” Lasn told Reuters, adding they began promoting it online on July 13. “We were inspired by what happened in Tunisia and Egypt and we had this feeling that America was ripe for a Tahrir moment.”

“We felt there was a real rage building up in America, and we thought that we would like to create a spark which would give expression for this rage.”

Teresa of Koch’s Tour decided to find out more about Kalle Lasn, the man behind Adbusters:

Adbusters was founded by a European-born gentleman by the name of Kalle Lasn, who currently lives in Canada.  Mr. Lasn has never lived in the United States.  He HATES capitalism in all of its forms, and he especially hates American consumerism.  In his book, “Culture Jam“, he audaciously claims that he wants to “wreck the world”.

I guess Mr. Lasn – despite his stated contempt for consumerism, capitalism, and filthy dirty profit – realized that the kids on Wall Street are getting all of the glory (not to mention all of the donations), so he decided to set the record straight.  I mean, there IS money to be made from all of this, after all….

So on October 7th, Mr. Lasn sat down with a reporter at The Tyee – an “independent daily online magazine reaching every corner of British Columbia and beyond” – and gave them a self-serving interview wherein he disclosed just how grass-roots this whole campout in the park – or as I like to call it, ”Airhead Autumn”- really is.

It turns out that this really DID start long before September 17th:

…it all falls under a hashtag that began far from the pepper spray and mass arrests, in the offices of Vancouver’s own Adbusters magazine, as #OccupyWallStreet…..

Mr. Lasn and his cohorts have been attempting to stir the pot for over 20 years as it turns out, so he is positively GIDDY with the success of his latest campaign:

…..as the movement overspills Wall Street, he describes it as the most successful in the 22 years he and his magazine have been advocating “culture jamming,” which originally sought to subvert consumerism.

Adbusters came up with a poster design, which was designed to divert peoples’ attention away from the true meaning behind the protest: 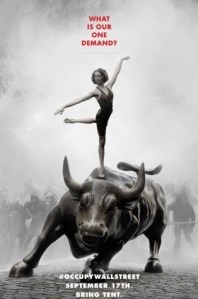 And like all good Politburos, the elite planned on sitting up in their safe little offices, letting all of the work (and any eventual blame) be carried out by the gullible, the naive, and the expendable:

….we always thought of ourselves as the catalyzers, the people who set that meme, as we like to call it, in motion. And right from the start we decided that we’re not going to play a part on the street, that if our meme flies, if people love it, then we’re happy to come up with posters, and we did send them all kinds of handbills…..

It was rather nice of them to provide the kids with supplies, don’t you think?

These people have always been behind the scenes, directing the show, and those kids need to understand that this protest isn’t about THEIR demands; it’s about fulfilling Mr. Lasn’s desire to be relevant:

….I feel like this is the first time in the 20-plus year history of Adbusters that we really have a chance to pull something off….

It doesn’t sound like he is going to give up on this particular protest, because this time he and his friends are convinced that they are >>this close<< to finally seeing their dreams of revolution come to fruition.

Who’s “their”. Read on. It’s basically a collection of nasty old anarchists and commies who are egging the clueless kids on.

Shockingly, Adbusters has a history of (thinly-veiled) anti-Semitism — and today’s protests against “Wall Street” and “bankers” is merely an extension of its earlier protests against the controlling cabal of “neocons.”

Adbusters sees filthy, sneaky Jews everywhere — and everywhere this stealthy cabal of neocons, bankers, and Zionists, is controlling the world, robbing The People, and hoarding The Wealth.

Of course, we’ve heard such things before in history. But what’s new is that the mainstream Democrat Party — which is no longer the party of JFK or Scoop Jackson, or even Walter Mondale, but is rather the product of a New Left, led by Marxists, racial demagogues, and “progressives” — have openly embraced and defended this movement.

Can some of the followers of this  movement be reasoned with?

Benjamin Domenech of The Transom thinks so and says the Right is missing an opportunity in dealing with the #OWS folks.

Let me explain. It’s not that I think they’re some latent conservative movement. But at their core, I think they are animated by disgust with many of the same things that drove Tea Partiers to the streets. They are responding to their circumstances the only way they know how, thanks to a flawed mindset ingrained in them by teachers and leaders. Unfortunately, the Right is reacting not by advancing winning arguments to them, but by ridiculing them, conceding them to the radical Left.

Many of us on the right have decided most of these indoctrinated people are unreachable, and the strategy is to reach news consumers in the mushy-middle, the very folks who are susceptible to buying the media’s sympathetic #OWS  media narrative. The counter-narrative we are pushing is that the #OWS crowd are clueless drones, agitators, hippies, hardcore commies, etc., which is of course true for many – perhaps most of them. The leaders of the movement are certainly a radical and nefarious lot.

But Domeneche believes many of the folks showing up at these protests can be reached:

The inherent belief among most Americans is that you direct your destiny. Essentially, this boils down to the idea that with hard work and time and energy you can reach out and seize the future you want for yourself.

This contrasts strongly with the attitude of most of Europe and Asia, where destiny is not subject to individual pursuit. Instead, you live instead within a world outside your control, where you navigate between social and economic barriers within your time.

This creates a point of view where life is about navigating within a world outside of your control. You are powerless as the sailor is over the waves of the sea. Thus, the only response to bad situations is an appeal to the enshrined other, the powerbrokers and larger forces, for rescue, protection, and fair treatment.

In New York City and elsewhere, the Occupy gatherings are an expression of this. They are an inchoate appeal by the distressed, the unemployed, and the frustrated for help from higher powers. They are disgusted with what they perceive as the unfairness of life. They are disgusted by bailouts and corporate cronyism and a government that is not solving the problems they face in life. This is not an inherently leftist movement. It is a cry for help from an uninformed, frustrated America.

Yes, a portion of them are old guard hippies bent on drum circles and jazz hand assemblies, aimed at bending the naive and the uninformed to the vile lie of socialism. They laud the idols of free crap and deviance. They play Lefty to the Grasshopper. But the response of the right is not to advance an alternate argument or convince the Grasshopper that he would be better off with a paycheck instead of an unemployment check; instead, our response is ridicule and anger.

Fairness is not an idea at war with liberty and free enterprise – in fact, it is at its core. The case for equality of opportunity is one that can win hearts and minds. As Calvin Coolidge said, “Democracy is not a tearing down; it is a building up. It is not denial of the divine right of kings; it asserts the divine right of all men.” The meritocracy of earned success is not something these protesters should find unacceptable.

I applaud those conservatives who are willing to brave the #Occupy hordes to make this case.

But, when a movement is marked by such stunning ignorance, radicalism and moonbattery, (see RWN for The Top 10 Moments From The Occupy  Wall Street Protests, So Far), there has to be a place for ridicule, too.

Everything you need to know about #OWS can be gleaned by looking at who their biggest supporters are.

If these folks really think they’re “raging against the machine” with such well heeled support, they clearly are delusional tools.

More sources of support, via Big Government: The Union and Foreign Influence Behind the Occupy Wall Street Crowd

While there have been intense arguments in the media recently about hints of anti-Semitism which have erupted at New York’s Occupy Wall Street protest, very little attention has been paid to similar problems cropping up at other “Occupy” events around the country.

Below you will find some photographs and a video taken at the Occupy Los Angeles encampment which reveal how there is a growing encroachment of anti-Semitic “Jewish bankers” conspiracy theories becoming more and more evident at these events. Obviously not everyone at the “Occupy” protests is an anti-Semite, but the fact that these statements and views fit so neatly into the whole anti-banker milieu, and often go completely unchallenged by fellow protesters, should give everyone cause for concern about where this whole movement is heading. 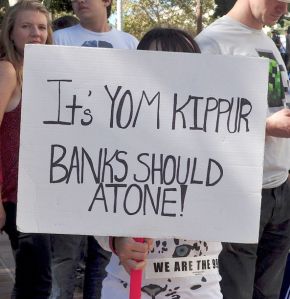 16 thoughts on “Adbusters, Soros $$$ and The Confused Kids of #OWS”