In the Catholic Church, December 8 is the feast day of the Immaculate Conception of the Blessed Virgin Mary.

But in Washington DC, it’s OBAMA  Day! And oh, what an extra special Obama Day it was –

Courtesy of the RNC.

And At long last Issa is now saying, out in the open, what so many of us have have been saying all year: They Made a Crisis to Limit People’s 2nd Amendment Rights

Chairman Issa had resisted making the assertion that Fast and Furious was an attack on the 2nd Amendment because it is such a serious – surreal charge. Would the top law enforcement officer of the United States really do such a thing? It’s almost unthinkable. But look at Holder’s history of lies and corruption, and the nefarious cabal of leftists with whom Obama surrounds himself, and the awful truth becomes fathomable.

Sparks flew during this exchange between Chairman of the House Committee on Oversight and Government Reform, Darrell Issa and Attorney General Eric Holder, whom Issa deemed a “hostile witness” because he has come before the committee and said he would clean house, yet no house has been cleaned. Issa bitterly noted that he had asked that the Atty General testify under oath, and was his request was denied.

He also charged “the IG is not in our opinion qualified to investigate, and has overstepped the line.”

Did you notice how “the Gentlewoman from Texas” interrupted every time Issa started making a dangerous (to Holder) point.

“Are you aware that you are in fact, by doing so, in the fact that we already issued from the oversight committee a subpoenea, you are standing in contempt of Congress unless you have a valid reason that you express it,” Issa said.  “That you provide logs which you have refused to have provide for the other information. Otherwise, you leave the committee no choice but to seek contempt for your failure to deliver or to cite a Constitutional exemption.”

Holder responded, “We will respond in a way that is consistent with the way in which the Justice Department has always responded to those kinds of…”

When order was restored by Chairman Lamar Smith, Texas Republican, Holder continued, “…will respond in a way that other Attorneys General have…other justices have…”

At this point things became particularly intense between Mr. Issa and Mr. Holder. Issa reached back to a Watergate era reference comparing AG Holder to President Nixon’s Attorney General John Mitchell, who was sentenced to 19 months in prison due to his involvement with the Watergate scandal.

Holder asked Chairman Smith if the John Mitchell reference “was called for.” Holder then proceeded to compare Congressman Issa to the late Senator Joseph McCarthy, the politician famous for heading up the 1950’s hearings that sought to investigate communist infiltration in the U.S. government.

“The reference to John Mitchell. Let’s think about that,” said AG Holder. “Think about that. At some point, you know as they said at the McCarthy hearings, ‘Have you no shame?’”

Video at the link.

Rep. Darrell Issa (R-CA),Chairman of the House Committee on Oversight and Government Reform, delivered a blistering opening statement at the House Judiciary Committee Oversight Hearing of the Department of Justice. He blasted the DOJ for facilitating the deadly repercussions of Operation Fast and Furious. He noted that his committee is now starting to get to the truth about the heinous operation.

See American Freedom for more videos from the hearings.

I forgot to mention –  This hearing marks the beginning of the end for Holder. His days are numbered. Republicans have clearly had it with the lies, obfuscations, misdirections, and obstruction. If he doesn’t step down willingly,  they will move to have him impeached. 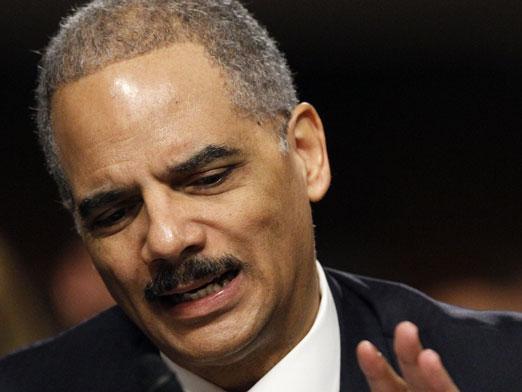 Attorney General Eric Holder testifies before the House Judiciary Committee today about when he first became aware of the tactics used by the ATF’s failed sting operation aimed at gun smugglers.

Previously, Holder vowed that the tactics used during operation Fast and Furious would never be used again by the Justice Department.  The operation allowed guns to be smuggled across the U.S.-Mexico border in order to establish links between arms dealers and drug cartels.

The Attorney General has also said that the Justice Department never knowingly provided Congress with false information about Fast and Furious, a charge leveled by House and Senate Republicans. Mr. Holder will testify before the full House Judiciary Committee.

I can tell you right now, it’s going to be frustrating to sit through the thick skulled Democrats’ attempts to misdirect and whitewash. It’s started already with John Conyers, who’s speaking now about the importance of ending gun violence —blablabla. You know how we do that, Senator? We prosecute the members of the Obama administration who are complicit in increasing gun violence through their disastrous gunwalking policies.

Issa takes exception to Conyer’s comments – The question is about gun control – not controlling the guns and drugs flooding across the border, he said.

Wow, Issa is letting Holder have it with both barrels: (paraphrasing):

I hope you don’t point your finger in people’s faces saying this isn’t organic – there’s nothing more organic then border patrol agent, Brian Terry being dead with fast and furious guns.

Another Dem speaking now – yep, it’s clear that they’re going to use this hearing to promote increased gun control laws. His comments have no relationship – none at all –  to the subject at hand – (the fact that the ATF under Holder, sold thousands of guns to straw purchasers and allowed them to walk across the border to kill people with.)

I don’t know how the Republicans can keep their composure while these morons misdirect and obfuscate.

Now Holder is saying that the gunwalking was inexcusable, and when he heard about it, he immediately took action….blablabla…

He too, is using the hearing as a forum to push gun control.

A reminder, via Ann Barnhardt:

Psychopaths ‘like Eric Holder, Barack Obama, Nancy Pelosi, and all the rest, feel nothing when they lie and thus do it almost constantly. Oaths are something that they laugh at as the domain of stupid religious rednecks. If we don’t acknowledge this plain, obvious truth and stop treating these people as if they are psychologically normal and honorable and presuming that they are honest and bound by any oath, then they will destroy all of us with their lies and deceit.’

As Holder yammers on and on about all of his “progress” stopping the flow of guns across the border, he offers no explanation as to why this operation existed. None.

Lamar Smith, deferring Fast and Furious questions to his colleagues, opts to ask Holder questions about Elena Kagan’s nomination to the Supreme Court, and her involvement while working for the Obama administration, with the health care bill.

He’s asking why the Department has refused to comply his queries about the case – is he asserting a legal privilege? Holder is giving a long, confusing answer -Lamar concludes, no – he hasn’t asserted illegal privilege.

Smith says, “is there any reason why I should not get the documents, and interview the people I need t talk to?”

Looks like Smith is getting a little frustrated from repeatedly hitting Holder’s stonewall.

Conyers is throwing softballs now. Time to get up and refresh my coffee.

Rep. James Sensenbrenner (Wis) seconds Senator Grassley’s call for Asst. AG, Lanny Breuer to step down. Whoa!  Sensenbrenner threatens Holder with the “I” word – impeachment – out of his frustration with the DOJ’s obstruction.

Holder says “no one in the Justice Dept. has lied.” They have only made misleading statements.

Sensenbrenner’s use of the “I” word has clearly ruffled some feathers in the hearing with other congressmen rising up to ask for clarification. Apparently, Sensenbrenner hasn’t been entirely clear about who he means to see impeached.

Now they’re taking a break so the House can vote on some bills.

The big takeaway so far – Holder is doubling down – he thinks he can just brazen his way through this. At least one Republican is considering Holder’s impeachment as one possible recourse.