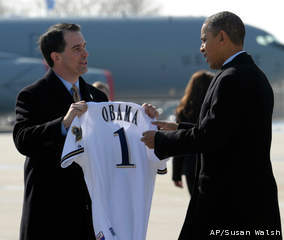 Obama made a taxpayer-funded campaign trip to Wisconsin where he tried to take credit for Walker’s success in growing the state’s economy.  Obama hopes to see Walker defeated  in the Recall effort, thereby re-energizing his left-wing base that is so vital to his winning Wisconsin and its 10 Electoral College points in November.
In spite of those tensions, The Washington Times reports that Gov.Walker  greeted the president at the airport in Milwaukee and presented him with a Brewers baseball jersey.

But the governor bowed out of the planned Master Lock tour with Mr. Obama, saying he had a stomach flu. Mr. Walker said his decision not to accompany the president to the plant had nothing to do with politics.

Mr. Walker is the target of a recall election that could come in the spring or summer. Both sides in the debate are portraying the recall election as a test of how Mr. Obama will fare in Wisconsin this year.

Republican National Committee Chairman Reince Priebus, a native of Wisconsin, called Mr. Obama’s visit “nothing more than yet another taxpayer-paid … campaign stop by the president.”

Coinciding with his speech on the economy, Mr. Obama seized on a positive economic report Wednesday showing that manufacturing production rose 0.7 percent in January.

“Our job is to seize this moment of opportunity to create new American jobs and American manufacturing,” the president said. “And the place to start is our tax code.”

It’s been Walker’s conservative, pro-growth policies that have been helping Wisconsin dig out of the hole, not anything Obama did. The fact that he would try to horn in on Walker’s success, while on a taxpayer funded campaign stop, while his union supporters are working tirelessly to unseat the Governor — is almost too much to take.
The Tea Party Express is asking for donations to help spread the word about Gov Walker’s conservative achievements, and fight back against Obama and his failed policies.

While Republican voters continue to fluctuate on their choice for the 2012 presidential nominee, Megadeth frontman Dave Mustaine has made a firm decision as to who he wants to see in the White House: former Pennsylvania Senator Rick Santorum.

“Earlier in the election, I was completely oblivious as to who Rick Santorum was, but when the dude went home to be with his daughter when she was sick, that was very commendable,” the thrash metal star told MusicRadar.com.

“You know, I think Santorum has some presidential qualities, and I’m hoping that if it does come down to it, we’ll see a Republican in the White House…and that it’s Rick Santorum.”

Mustaine said he was supporting Santorum over the primary’s delegate leader Mitt Romney because he was distrustful of the means by which the former Massachusetts governor created his immense wealth.

“I’ve got to tell you, I was floored the other day to see that Mitt Romney’s five boys have a $100 million trust fund,” Mustaine told the music website. “Where does a guy make that much money? So there’s some questions there.”

I have to confess that I’ve never been  a partaker of his kind of music – death metal, or whatever you call it. I’ve always found it to be too dark, and ….aaaaa kinda evil – oh… apparently he thinks so, too:

In 2008, he supported John McCain against Obama.

The Other McCain for the latest good news on Santorum: Santorum Conquers the World?