I wonder if she was expecting to be met with so much opposition to her support of the Obama administration’s  contraception mandate.

New York Democrat Rep. Kathy Hochul (CD-26) is told by a man attending a Town Hall Meeting that Barack Obama’s mandate on religious institutions to violate their religious beliefs is “tyranny” – a “slap in the face” to Catholics in America, and an attack on “Religious Freedom.” Hochul supports Obama’s mandate, and her only response was to say she held a Town Hall somewhere else and the people there were focused on jobs!

The words flowed effortlessly from this righteously indignant man, and she had no response  for him. How do you explain why you favor trampling on religious rights? “We’ll just agree to disagree?”

It’s beyond me why anyone in their right minds would be looking to Democrats for “ways to get people back to work”, at this point. None of their ideas work – they’ve had their chance, and failed miserably.  But it’s funny how the contraception issue was put out there to deflect from Obama’s economic failures, and now this issue has become so toxic for them, they’re trying to shift back to the failing economy.

Nice job, Barry. Like I keep saying, picking a fight with the Catholic Church during an election year was not a smart plan.

More video from the town hall, with citizen after citizen speaking their minds,  here.

I think we can safely consider Rep. Hochul, the ObamaCare contraception mandate’s first casualty. That was a fast two years, wasn’t Congresswoman? Send your complaints to Obama’s genius reelection committee.

A week ago or so, Duane Patterson and I got into a debate on my show over the impact of the HHS mandate on Catholic voters.  Duane worried that Barack Obama had split Catholic voters, but I reminded Duane that the Catholic vote is always split, and usually tilts slightly towards Democrats.  Obama won the Catholic vote by nine points in 2008.  What Obama did was unify Catholics — and not just Catholics, either — in opposition to his arrogance.  Bishops and priests are organizing opposition to this mandate, and this is just one small measure of the result.

Hochul, it should be remembered, is only in office because of Chris Lee’s virtual tomcatting on Internet dating sites.  He resigned when the scandal broke, and Hochul won the special election in an R+6 district one year ago.  It was one of the few rays of sunshine for Democrats midway through Obama’s term, but her chances of winning again seem to be dimming substantially in NY-26.  This is a small measure of the political miscalculation made by Obama and his administration on the mandate, and perhaps a signal to opponents of the mandate in other districts to follow suit.

More than 2,500 Christian leaders have signed a letter opposing Obamcare’s anti-conscience mandate. The letter’s release adds to the most recent furor over the rule’s blatant violation of religious liberty and decries the mandate’s coercion of religious employers to subsidize abortion-inducing drugs, contraceptives, and sterilization regardless of moral or religious objections to such services.

Looks like our side is pushing back against the left’s lame attempt to frame the issue as somehow about woman’s rights. It’s nothing of the sort.

On February 27, Heritage will host Women Speak Out: Obamacare Tramples on Religious Liberty. A panel of women will discuss how religious freedom is an early casualty in Obamacare’s collision course with freedom and why protecting religious liberty, specifically, and individual freedom, generally, requires the repeal of Obamacare.

Join us Monday at 2 p.m. (EST) for the event or watch it live online.

Oh, Nancy, Nancy, Nancy. What are we going to do with you? You are such a constant source of disinformation on Catholicism:

“I’ve come from an era when (Catholic) women were deprived of receiving absolution if they confessed that they used birth control,” Pelosi complained, “It is good to get it out on the table.”

Oops. I’m not sure where, or how, you got that information. But it’s completely wrong. There is no sin God won’t forgive. But there are a couple of catches. Looks like it’s time to brush up on the sacrament of confession.

Mr. Obama has declared war on our Judeo-Christian culture. He understands the economic transformation of America cannot take place without a government-imposed social revolution: Smash religion and the family – the key institutions of civil society – and the restraints upon the federal leviathan are removed. The path is laid for a soft authoritarian nanny state. The president acts as if he is hell-bent on eradicating Christianity from the public square. 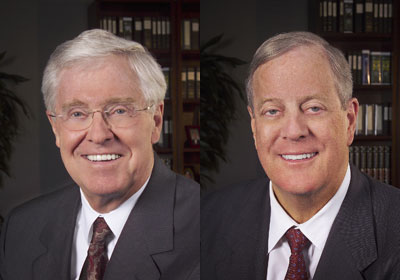 Via Sooper Mexican, I bring you another excellent letter penned by Philip Ellender, President, Government & Public Affairs of Koch Companies, responding to Obama’s campaign Manager, Jim “punch back twice as hard” Messina’s latest moronic attempt to rile up the left-wing mob with nonsensical and sophomoric attacks on the Koch bros. Significantly, Ellender characterized  the Obama Camp’s cynical attacks on private citizens “an abuse of the President’s position, and “a disservice to our nation”.

A Letter to the Obama Campaign

Because every American has the right to take part in the public discourse on matters that affect the future of our country, I feel compelled to respond directly about a fundraising letter you sent out on February 24 denouncing Koch. It is both surprising and disappointing that the President would allow his re-election team to send such an irresponsible and misleading letter to his supporters.

For example, it is false that our “business model is to make millions by jacking up prices at the pump.” Our business vision begins and ends with value creation — real, long-term value for customers and for society. We own no gasoline stations and the part of our business you allude to, oil and gas refining, actually lowers the price of gasoline by increasing supply. Either you simply misunderstand the way commodities markets work or you are misleading your supporters and the rest of the American people.

If I may interject, here, Mr Ellender –  Messina understands how commodities markets work. But he understands the mob mentality of the people to whom he’s appealing, even better. They have been taught what to think – not how to think, thus they react to dog whistles (Koch brothers! Big Oil!, Rich Corporations!), not reason and logic. Messina’s trying to stoke the inflamed passions of the mindless Jacobin mobs already protesting the evil 1 percenters.

Contrary to your assertion that we have “committed $200 million to try to destroy President Obama,” we have stated publicly and repeatedly since last November that we have never made any such claim or pledge. It is hard to imagine that the campaign is unaware of our publicly stated position on that point. Similarly, Americans for Prosperity is not simply “funded by the Koch brothers,” as you state — rather it has tens of thousands of members and contributors from across the country and from all walks of life. Further, our opposition to this President’s policies is not based on partisan politics but on principles. Charles Koch and David Koch have been outspoken advocates of the free-market for over 50 years and they have consistently opposed policies that frustrate or subvert free markets, regardless of whether a Democrat or a Republican was President.

If the President’s campaign has some principled disagreement with the arguments we are making publicly about the staggering debt the President and previous administrations have imposed on the country, the regulations that are stifling business growth and innovation, the increasing intrusion of government into nearly every aspect of American life, we would be eager to hear them. But it is an abuse of the President’s position and does a disservice to our nation for the President and his campaign to criticize private citizens simply for the act of engaging in their constitutional right of free speech about important matters of public policy. The implication in that sort of attack is obvious: dare to criticize the President’s policies and you will be singled out and personally maligned by the President and his campaign in an effort to chill free speech and squelch dissent.

Read the rest of the letter, here.

Linked by Doug Ross in Larwyn’s Links, thanks!

So awesome>>>Kira Davis: Wherein I follow the lead of our own President and apologize to President Karzai of Afghanistan on behalf of America…

My Apology to President Karzai on Behalf of Americans:

This is going to make you throw up in your mouth – “useful idiot” doesn’t even begin to describe the guy (esp. since he can’t be terribly useful with such a small audience.)

Via Father Z’s Blog: “The rights of man come not from the generosity of the state, but from the hand of God.”

Mark Levin Plays An Audio Clip From 1988 Of Ron Paul Accusing VP George Bush And The CIA Of Dealing Drugs:

Counterpoint by Neil Cavuto via Hot Air Pundit:  “Stop Demanding Benefits From a System You Give Nothing and Have the Nerve To Bitch at the Very Folks Who Pay Darn Near Everything” (Video):

It’s time for a little reality here, everyone has to pay taxes.” Neil Cavuto on Your World today gave a viewer warning before laying into the 49% of Americans who pay no income tax. “Just because you’re entitled to our government, doesn’t mean you’re entitled to bash the folks who pay for that government.” He begins with this chart: 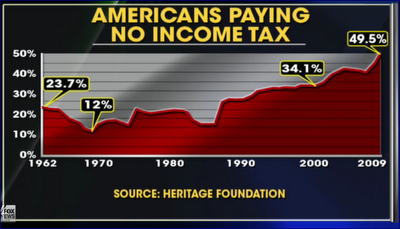 “It would be like being treated out to dinner, ordering the most expensive thing on the menu, then a pricey bottle of wine..Then bitching to the host about how much of a tip he left.” This is good. Watch the video.

That fondness for limited government is significant in this election year because it shows voters prefer the Republican approach in the core partisan dispute over resolving the nation’s fiscal problems.

Yet by 56 percent to 31 percent, people picked cutting government services over tax increases as the best way to reduce federal deficits.

Via Gateway Pundit: Newt: The Fact that You Have a US President Promoting Algae Is Like a Saturday Night Live Skit:

Commenting on Obama’s energy speech  On the Record with Greta Van Susteren, Newt said, “It was a remarkably false speech and illustrates the passion of his ideological commitment to a fantasy world.”

Watch to the end as Whittle articulates our worst fears realized, describing  a Cloward Piven Strategy well underway, and unstoppable if this country is suicidal enough to reelect Obama.

Via The Economic Freedom Project:

The Right Scoop: Rick Santorum and family on GBTV

Hat tip: Brian B for many of these.