I ran into this young lady promoting an upcoming “Rock the Vote” type event at the Kansas City tea party, today. The event is slated for 4/27, and will feature the conservative rock band, Madison Rising:

More info about the event, via Political Chips:

VICTORY ROCK/BATTLE OF THE BANDS WE are going to have a huge ROCK THE VOTE EVENT in KC! We have 8 Bands from the Metro area that have signed to compete for the $10,000 Grand Prize of an Advertising Package with Blue Springs Harley Davidson and they will be featured band at their Summer Bike Event on June 16th! Free ADMISSION! This event will both entertain and enlighten with KC’s Talented artists and Young Leaders speaking. We have Alex Shriver from the College Republicans, Joshua Charles co- author of Glenn Beck’s best seller, Paul Curtman, Will Stewart Stark With AFP, Katherine Thonpson a young woman who has started a Conservative Group in her high school and many more impressive YOUNG ADULT Leaders in the community. PLUS  MADISON RISING A POPULAR CONSERVATIVE ROCK MESSAGE BAND IS COMING TO KC just to play for the event. So bring your families, lawn chairs and blankets and be prepared to have a great time and ROCK THE VOTE!!! It will take all of us working together to WIN IN 2012!!! Family Atmosphere and Free ADMISSION! Come cheer on your Favorite Bands! Let’s Bring the Young and Old Together and ROCK TO VICTORY!!For more info. please call Theresa Emerson or email blushma@gmail.com Rain or Shine WE ARE ON!

Rules and guidelines if you wish to participate, here.

Here’s your introduction to Madison Rising:

At today’s tea party rally on the Plaza in Kansas City, I had a chance to ask conservative Republican, Jacob Turk, who’s running for Congressman Emanuel Cleaver’s seat in District 5, MO about Cleaver’s bank default with the Bank of America.

As I reported, here and here, the Bank of America’s lawsuit against the Democratic congressman seeks $1.5 million in principal, interest and late fees for his loan for a car wash he bought in 2002.

Jacob Turk said Cleaver, who is the Leader of the Congressional Black Caucus, and a member of the Progressive Caucus,  turned the SBA loan into the “Cleaver Grant Program”. Turk is calling for an investigation because Cleaver has neglected to list the loan on his financial disclosure form, and further asked, where did our money go – $1.35 million dollars on a car wash that is only worth $250,000?

A decent crowd turned out for a Tax Day Tea Party sponsored by the In God We Trust PAC  this morning on the Country Club Plaza, in Kansas City, MO. 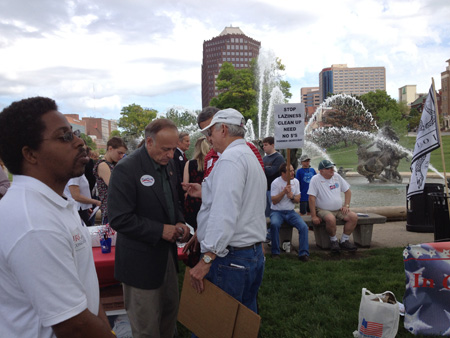 IA Congressman Steve King is in Kansas City this weekend for our two tea parties.

Jacob Turk gave a great speech, as he always does. 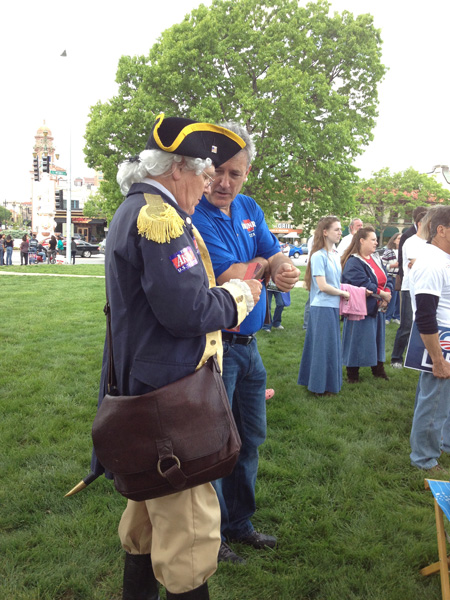 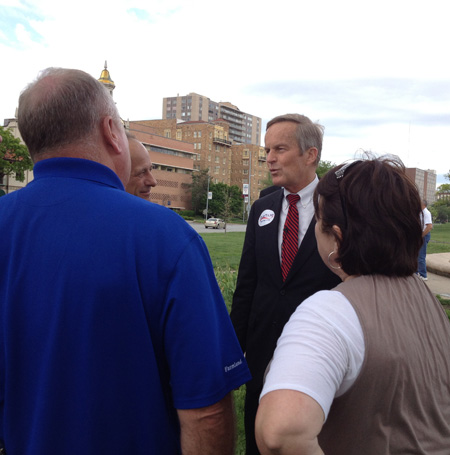 Todd Akin is running for the US Senate in Missouri. 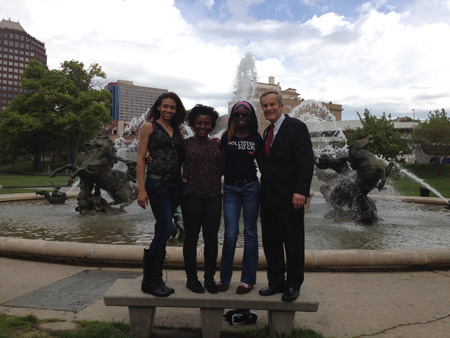 Jacob Turk, Republican Candidate for US Congress in MO Dist-5 spoke before the tea party crowd on the Plaza, with the JC Nichols Fountain as a backdrop.

Shane Schoeller’s speech in two parts. He had a little trouble with the PA system, but plowed through his speech, undaunted. This hardcore conservative would make a great Sec. of State.

Sunday, the 15th, Champion the Vote, FreedomWorks and Americans for Prosperity are sponsoring another tea party: Conservatives in Action Tax Day Rally:

It will be near the Country Club Plaza, at Theis Park.

Speakers will include Congressmen Steve King (R-IA), Kansas Secretary of State Kris Kobach, Pastor Stephen Broden, Joshua Charles, Mason Weaver, Bill Dallas, Jason Jones of Breitbart. com, Dr. Milton Wolf, Ignacio Riverosa, Rep. Paul Curtman, and Jeannie Burlsworth (founder of Secure Arkansas).  Gregg Knapp of KCMO 710 AM will be master of ceremonies.  Crossroads Revival Band will provide musical entertainment.
The organizers are making space available for local groups to set up tables and pass out literature for a nominal $25 fee.   If you belong to a group that would like a table, you can contact the organizers directly via the Facebook links below.
Facebook invitation:  http://www.facebook.com/events/137412766384268/
Facebook event page:  http://www.facebook.com/pages/Conservatives-in-Action-Rally/285557804854017

Mitt Romney “Today I Want To Talk About This Administration’s Assault On Our Freedoms!” pt.1:

Mitt Romney: “Today I Want To Talk About This Administration’s Assault On Our Freedoms!” pt 2

She knows a thing or two about difficulty.

The media was already scared of Ann Romney, but after what’s occurred over the last 48 hours, she will now be their primary target for the worst kind of personal destruction. How much do you want to bet Buzz Feed’s Ben Smith has already ordered his minions to locate her tanning bed? What does Politico’s Jonathan Martin have planned for Ms. Romney —  no stranger to doing Obama’s oppo-research on private citizens is he.

Wednesday night, Obama advisor and frequent White House guest, Hilary Rosen, picked up where Obama left off and lit into Ann Romney on CNN;  brazenly equating the raising of five children as a disqualifier when it comes to speaking on economic issues or even wome’sn issues.

As a result, Ann Romney stepped into the White House’s line of fire by handling the situation … with absolute perfection.

And as she did, let me assure you, Obama’s Media Palace Guards completely freaked out.

Welcome to what will surely become  “Palin II: The Nuclear Option.”

DNC Chair Pressed And Dodges On Hypocrisy Of Going On Bill Maher Show:

DNC Chair Rep. Debbie Wasserman Schultz on 1210 Philly News Talk Radio was pressed on the democrats hypocrisy of not going after Bill Maher for his comments about women (April 13, 2012).

Obama Attacks Press, But When Will Reporters Start Printing the Truth about the President?

Is the warm relationship between President Obama and the press growing chilly over ObamaCare? Obama told reporters how to do their job. Has the Obama Administration declared war on an otherwise friendly press corps, and will the press fight back? Find out on this Trifecta.

Bill Whittle is so right: “If there was a press corps between now and November – if even 1/100th of 1% of the press corps did their job- Barack Obama would never be reelected.

Case in point, via Townhall tipsheet:

For weeks President Obama has traveled the country delivering speech after speech asserting that if implemented, the so-called “Buffett Rule” would “stabilize” our national debt over the next ten years. In reality, however, it would do almost nothing to solve our lingering budget woes or pay off our national debt. Nevertheless, his unrelenting tax-the-rich mantra seems to be resonating with voters. According the latest Gallup poll, 6 in 10 Americans support the Buffett rule – named for billionaire investor Warren Buffett – a policy that would impose a 30 percent minimum tax rate on households that earn more than $1 million a year.

Stephen Hayes was hammering not only the Buffet Rule, earlier this week, but the media for not  challenging Obama on his phony numbers.

The Right Scoop: Allen West: I’m gonna expose these communist congress members for who they are:

West says the media isn’t challenging him on the substance of his accusation, they just don’t like the fact that he said it. But he vows to continue exposing these people and speaking the truth:

The thing is that, incredibly enough, that the media in their search to try to condemn me or attack me or bring up some time of sensational story, didn’t do their due diligence, didn’t do their research. As you said they’re just repeaters, they’re not reporters. So now they have egg on their face because they’re not arguing the point that I brought up. They’re arguing the fact that they just don’t like that I brought it up. Well, you know, tough on them. I’m going to continue to talk about the truth and I’m gonna expose them for who they are because I’m sick and tired of every time you turn around on the House floor, they want to say it’s the Tea Party radical wing of the Republican Party when the Tea Party is just a constitutional conservative grass roots movement that believes in our economic security, our energy security, our national security. And what American would not want to believe in that?

Watch at the link.

Thanks to Brian B. for many of these.