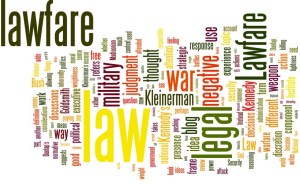 Lawfare is asserted to be the illegitimate use of domestic or international law with the intention of damaging an opponent, winning a public relations victory, financially crippling an opponent, or tying up the opponent’s time so that they cannot pursue other ventures such as running for public office.

It’s a tactic used almost exclusively by the left and *Islamic combatants in the war on terror..

And there are currently two high profile cases of lawfare going on in the United States, by Democrats with criminal backgrounds. The victims are two Georgia blogs which are accused of slander by the state’s Democrat Political Director, a criminal recidivist, and Aaron Worthing, formerly of Patterico, who has been framed by a domestic terrorist for a crime he did not commit.

In Georgia, two blogs,  Georgia Politics Unfiltered, and  the Democrat blog, Blog for Democracy, have been targeted with frivolous lawsuits for reporting on the criminal past history of the Georgia Democratic Party political director, Rashad Richey.

His last arrest occurred in 2010 while he was on the Democratic Party of Georgia’s payroll, and he Owes Over $4K in Back Child Support.

I reported on the shocking story, here.

Rashad Richey responded by filing frivolous lawsuits against the two Georgia bloggers who had reported on the story.

Since no one had reported anything but the embarrassing truth about Richey, he has no case. It is without a doubt, a totally absurd, nuisance lawsuit. You can’t slander or liable someone with the truth.

As Andre Walker of Georgia Politics Unfiltered says: Free Speech is My Defense:

The thirteen page answer says the lawsuit of Georgia Democratic Party political director Rashad Richey should be dismissed because all or part of the allegedly slanderous or libelous material or content is true and is protected political speech under the Constitutions of the State of Georgia and the United States of America.

Walker has written An Open Letter to Georgia Democratic Party Political Director Rashad Richey, asking that he drop the case, or face the consequences.

The letter, which is posted below, essentially asks your attorneys to voluntarily withdraw, abandon, discontinue or dismiss the lawsuit filed against me. The letter gives you and your attorneys thirty days from the date of the letter to end this frivolous legal action or face claims of abusive litigation under the Georgia Abusive Litigation Act.

Walker has also authored the Blogger Shield Bill because blogs and new media still fall into a “murky gray area regarding protection from revealing their sources on a story.”

That’s why, through research and consultation with other bloggers, I’ve crafted a new bill to level the playing field.

You can donate to Andre Walker’s legal defense fund, here.

The other high profile case is darker and even more worrisome because we’re dealing with a much more vicious and cunning criminal, and he’s being funded by some left-wing heavy hitters.

The victim is Aaron Worthing, formerly of Patterico, and the guy going after him is Brett Kimberlin, a convicted domestic terrorist, drug dealer and document forger.

As The Lonely Conservative notes:

He’s also a pathological liar. His unique ability to butcher the truth caught the eyes of prominent leftists like George Soros, Barbara Streisand and Teresa Heinz Kerry (wife of former Senator and presidential candidate John Kerry) who have donated tens of thousands of dollars to his “charity” through their foundations.

Last night when I wrote about this (post was updated and bumped so it’s dated today) I was at the end of a very long day and didn’t have the time or energy to get into details and was hoping you would follow the links. Anyway, this Kimberlin guy should not be a free man. His claim to fame is setting bombs all over the town of Speedway, Indiana. Here’s a news report describing his crimes.

It was at Speedway High School where the freshman football team had just played a game and the players were still getting dressed. Hundreds of parents and students were either waiting in their cars or walking through the parking lot after the game.

A Speedway High School gym bag had been left by itself, as if forgotten by a player. One of the parents, Carl DeLong, 39, walked over to retrieve it when the bomb went off. His right leg was nearly blown off and his left leg and right hand were severely damaged. Doctors tried to save his leg but had to amputate.

If you read the whole thing, you’ll note that these bombings went on for several nights before the victim, Mr. DeLong, was critically injured. The whole town was terrorized and living in fear. A few years later, after losing his leg and having fingers reattached, Mr. DeLong took his own life due to the pain he endured thanks to Brett Kimberlin, the perpetrator of these crimes. DeLong’s widow (who was also injured) sued Kimberlan, and was awarded over $1.5 million. He had a long criminal record, but thanks to lax federal criminal laws, his 50 year sentence was reduced to 17 and now he’s out on the streets, the internet, and the courtrooms, harassing conservative politicians and bloggers, while hiding his income so he doesn’t have to pay Mrs. DeLong.

Regular readers of this site know that for some time the convicted domestic terrorist known as Brett Kimberlin has been harassing me.  He did this because I dared to offer a bit of light, free legal help to a man he was suing named Seth Allen and then as he came after me, I told the truth about his deplorable criminal background and the fact he lied under oath in a hearing on November 14, 2011 and recommended that he be charged with perjury.  (If you didn’t know, you can catch up on the story, by using this link.)  And for a while I have been silent about the saga, so that maybe you thought he had moved on and had chosen to leave me alone.  Nothing could be further from the truth.

Starting on January 9, 2012, Brett Kimberlin actually attempted to frame me for a crime.  He falsely accused me of essentially beating him up inside the courthouse for the Montgomery County Circuit Court, in Rockville, Maryland.  He has claimed at different times that I decked him, that I struck him three times, that I wrestled with him, that I pushed him, that courtroom staff separated us, that the sheriff’s deputies separated us, and that even after the deputies arrived that I kept coming at him repeatedly and had to be restrained.
What didn’t occur to him was that there was a security camera that captured what really happened in the courthouse that day.  I have the footage and I have included it in a long post that tells the whole story of how I came to be there that day and what really happened.  You will read with your own eyes the transcripts and documents in which he claimed I beat him up, and then you will see the footage that proves that this was a fabrication.  I have even created a video comparing his description of what happened to the video footage, piece-by-piece.  In other words, you won’t have to believe my word on this.  You will only have to believe your eyes.
But the post will also tell you the harrowing story of the damage this man has done to my life.  He did more than just lie about what happened.  This convicted document-forger produced fake photographs of his supposed injuries and even fake medical records.  And using that falsified evidence and his lies, he convinced the Montgomery County State’s Attorney to maintain second degree assault charges against me for over two months—with a punishment of up to ten years in prison, if convicted—taking it so close to trial that I was forced to take the time and expense of preparing much of my defense.  He has cost me and my wife our jobs because our workplace was frightened that this violent bomber might show up at work.  After all, he had published my home address and work address in court filings, for no reason other than to harass me.  He has obtained a peace order (similar to a restraining order) against me in part for supposed “harassment” for having told the truth about him on this blog.  And you will learn that after the video emerged, the charges were dropped and the peace order was dismissed on appeal.
And you will learn that once I had the video, I came to the State’s Attorney’s office for Montgomery County, Maryland.  I showed them, as I am about to show you, how Kimberlin lied repeatedly under oath in his attempt to frame me.  I documented it meticulously, as I will for you.  And I demanded justice.  And they refused to provide it for me; they blew me off.
And you will learn how you can help me correct this injustice.

So please read the larger post.  It is long, but there is a lot to tell and I really could use your help.

How you can help, here.

First, please spread the word far and wide about this story.  Tweet it, blog it, Facebook it, link it, whatever.

*Added as an afterthought.