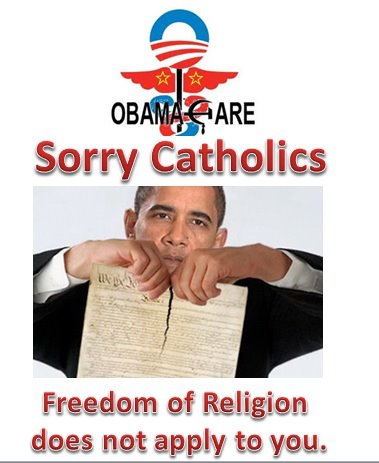 Image via A Catholic View

As I said on the very first day the outrageous HHS contraception mandate came down,  it was a huge tactical error for the Obama administration to pick a fight with the Catholic church during an election year.

There was absolutely no way the church was going to lay down on such a critical life issue – in fact, they are going on the offense.

Dozens of Catholic institutions filed lawsuits today against the Department of Health and Human Services over its mandate and its narrow definition of religious practice:

Catholic archdioceses and institutions filed suit in federal district courts across the country Monday against the so-called contraception mandate, claiming their “fundamental rights hang in the balance.”

The plaintiffs include a host of schools and organizations, including the University of Notre Dame and the Archdiocese of New York. The lawsuits, though related, were filed individually.

The schools are objecting to the requirement from the federal health care overhaul that employers provide access to contraceptive care. The Obama administration several months back softened its position on the mandate, but some religious organizations complained the administration did not go far enough to ensure the rule would not compel them to violate their religious beliefs.

Kathryn Jean Lopez posts a brief statement from Timothy Cardinal Dolan, president of the US Conference of Catholic Bishops and one of the chief critics of the HHS mandate:

We have tried negotiation with the Administration and legislation with the Congress – and we’ll keep at it – but there’s still no fix. Time is running out, and our valuable ministries and fundamental rights hang in the balance, so we have to resort to the courts now. Though the Conference is not a party to the lawsuits, we applaud this courageous action by so many individual dioceses, charities, hospitals and schools across the nation, in coordination with the law firm of Jones Day. It is also a compelling display of the unity of the Church in defense of religious liberty. It’s also a great show of the diversity of the Church’s ministries that serve the common good and that are jeopardized by the mandate – ministries to the poor, the sick, and the uneducated, to people of any faith or no faith at all.

The institutions filing lawsuits don’t just comprise a few ultraconservative institutions, either.  The University of Notre Dame hosted a speech by President Barack Obama in 2009, but today insists that Obama and his administration are attacking religious freedom in their complaint.

The Obama administration’s attempts at misdirection on the issue – turning it into a debate about women’s rights and what-not –  has ended up uniting the church against them,and insulting the intelligence of women with working brain cells.

This oppressive move may well cast Catholics off from the Democratic Party for a generation.  This will be a “come to Jesus” moment for many Catholics, and a wake-up call to the USCCB about the nature of government mandates in general.