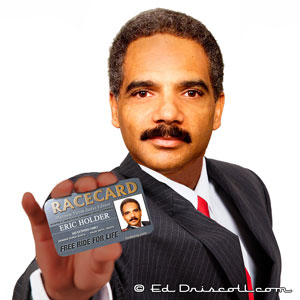 This morning, Attorney General Eric Holder addressed the NAACP National Convention  in Houston, Texas, where media was asked to present photo ID in order to attend. You can’t make this stuff up.

Via Katie Pavlich of Townhall:

What did media need in order to attend? That’s right, government issued photo identification (and a second form of identification too!), something both Holder and the NAACP stand firmly against when it comes to voting. Holder’s DOJ is currently suing Texas for “discriminatory” voter ID laws. From the press release:

All media must present government-issued photo I.D. (such as a driver’s license) as well as valid media credentials. Members of the media must RSVP to receive press credentials at http://action.naacp.org/page/s/registration. For security purposes, media check-in and equipment set up must be completed by 7:45 a.m. CDT for an 8:00 a.m. CDT security sweep.  Once the security sweep is completed, additional media equipment will NOT be permitted to enter and swept equipment will NOT be permitted to exit.

Ya think any of the MSM types who were asked to show ID to get in noticed the delicious irony?

Holder, the nation’s first African-American attorney general, is less than two weeks removed from being held in contempt by the House. He received a raucous welcome from the NAACP crowd, which at the close of his speech chanted “Holder, Holder, Holder.”

The attorney general singled out the Justice Department’s case against a Texas state law that opened in court this week, saying that proponents of the measure — who say it cuts down on voter fraud — have political motivations and are trying to curb voting rights.

“We will not allow political pretexts to disenfranchise American citizens of their most precious right,” said Holder in his speech to the NAACP convention in Houston.

“I don’t know what will happen as this case moves forward. But I can assure you that the Justice Department’s efforts to uphold and enforce voting rights will remain aggressive. And I have every expectation that we’ll continue to be effective.”

For whatever reason, Obama declined the invitation to speak at the convention, and is sending Biden, in his stead.

Barack Obama won’t be attending the NAACP’s annual convention in Houston despite being advertised as a guest speaker.

Instead of Obama being the keynote speaker on the convention’s final plenary session, Vice President Joe Biden will deliver the address.

Mitt Romney will address the convention, tomorrow in what NPR is calling an intriguing opportunity, but with some risk For Romney:

There has been no shortage of advice for what Romney should say when he addresses members of the nation’s oldest civil rights organization, which is focused this week on issues ranging from the economy and education, to health and voting rights: Talk about your father’s civil rights legacy, urged Democratic strategist Karen Finney in a column for The Hill; talk about unequal access to health care and quality education — and ask what Democrats have done for you lately — advised Miami Herald columnist Leonard Pitts Jr.

But raising issues beyond his standard campaign trail economic message, and his recent embrace of education parity as the “civil rights issue of our era,” could be risky political business for Romney.

“This is an important appearance for him,” says Rogers Smith, a University of Pennsylvania political science professor who has written extensively about race and politics.

Should be ….interesting…to see how people who  “raucously applauded”  our scandal plagued disgrace of an Attorney General, will receive Mitt Romney. I think it could end up being a debacle for him. In fact, I wouldn’t be surprised if  there were Democrat operatives on the ground there making sure it’s a debacle for him.

Doug Ross: The Dissociative Press: No Longer in the News Business; Now Professionally Lying for Democrats

I’m not sure when the Associated Press (also known as the Dissociative Press, which is the term they prefer, I hear) decided to get out of the news business and into republishing Democrat National Committee press releases. But it’s clear from the last couple of election cycles, that the transition occurred sometime before 2008.

Consider the latest lies promoted by the contemptible Eric Holder regarding voter ID:

The state is trying to become the tenth to require photo identification to vote.

To a wave of applause, Holder said, “After close review, the department found that this law would be harmful to minority voters and we rejected its implementation.”

Of course, the nitwits at the Dissociative Press echo the official DNC talking points almost word-for-word.

Attorney General Eric Holder, held in contempt last month, spoke at the NAACP National Convention in Houston today. Shamefully putting identity politics before truth and justice, the NAACP passed an emergency resolution in support of Holder. Once again, the Left is disgracefully dismissing the death of Brian Terry (when they can even remember his name) and is trying to help Eric Holder cover-up the fatal operation Fast and Furious by crying racism. Justice Shmustice, racists!