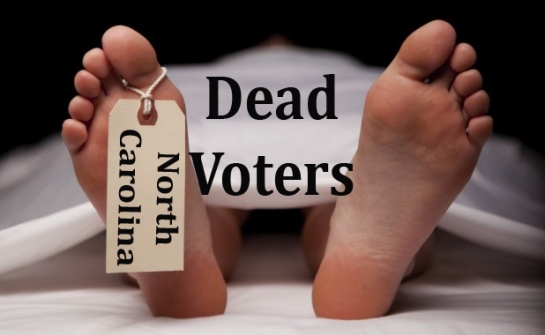 Via Drudge, a story about problems some  North Carolinians are encountering with electronic early voting, and guess who’s benefiting from the snafus?

The presidential election is just around the corner and voting issues have already become a problem in Guilford County.

On Monday, several voters complained that their electronic ballot machine cast the wrong vote.  All the complaints were made by people who voted at the Bur-Mil Park polling location.

One of the voters, Sher Coromalis, says she cast her ballot for Governor Mitt Romney, but every time she entered her vote the machine defaulted to President Obama.

“I was so upset that this could happen,” said Coromalis.

The Guilford County Board of Elections Director says the problem is no biggie –  it happens in every election, and can be resolved after the machine is re-calibrated by poll workers. Then maybe we should rethink these electronic ballot machines because while many, perhaps most people notice the problem, there are no doubt many who assume that their vote went through correctly and don’t even check.

I reported on another ongoing scandal that’s been going on in NC, Monday:

Here in NC, we have a local organization that posts RAW DATA from the NC State BoE site. It’s called Vote Tracker.

Well, one of my fellow patriots has brought to my attention, that we have what appears as Massive Voter Fraud. After only 2 days of our “ONE STOP VOTING” we have 758 individuals, who are 112 Years Old, that have already cast ballots here in NC for the November 6th General Election.

The Examiner: North Carolina Registers Over 583 Democrat Votes Over the Age of 112:

In fact, two of the 112 year aged voters were mail-in ballots from overseas; ostensibly vacationing to escape the now bitterly polarized political contest, and who can blame them?

But it gets worse when we note from another concerned voter, who indicated the following explanation, which goes but one full measure further to explain what’s happening in NC during this voting season of , perhaps, persistent political zombies:

I overheard a nice lady about 70 telling her friend the following: “Yes, I voted today.”

“Going back tomorrow too.”

“They took us to a place that don’t ask names and don’t write nothing down. They give $20 each time.”

This same tipster later sent a message indicating that he had, indeed, contacted the local election center, who immediately patted him upon the head graciously for being a good citizen with a promise to check on it again much later, in due course.

Obviously there is a problem, one in which voter ID might clearly provide a solution. A thing that only the Democratic party swears against at any cost, and for reasons becoming quite obvious.

Susan Myrick of Civitas Review Online, the official weblog of the Civitas Institute of North Carolina wished Happy Birthdays to the 112 Year Olds Voting in 2012!

I thought a couple of Civitas’ new friends would like to help me wish happy birthday to the thousands of 112 year olds who are about to vote in this year’s election.  You will remember that I wrote about the 110 year olds voting strong in the 2010 General Election and later wrote an update.  Well, its two years later and that’s right, those voters are now 112 years old. Already, almost 1,000 of them have cast their ballot in this year’s election.  In 2010, more than 9,000 110 year olds voted and many more 108 year olds voted in 2008.

So, here’s to North Carolina’s 112 year olds – Happy Birthday!  The 112 year olds in North Carolina are one of the groups of voters who exemplify the State Board of Elections contempt for clean elections. The State Board of Elections has been aware of what we believe to be erroneous age data for many years and has obviously refused any attempt to correct the incorrect data. It is evident that there is no hope for fair and honest elections when you have no idea who is on your voter rolls.

Last week Civitas had a visit from two representatives from The Organization for Security and Cooperation in Europe (OSCE) who are in the United States to observe our elections.  The OSCE partners with the United Nations on democratization and human rights projects. Funny that the national stories say they are here to determine if poll observers are intimidating liberal voters – we did not get that out of their visit. But if true, observers, sent to observe, observers? Did the liberal groups want the U.N. observers to intimidate our poll observers?

According to this article in The Hill, OSCE was invited by several liberal groups.  Civitas welcomed their visit because it gave us a chance to share our view on poll observers.

You read right. The people who are doing their best to maintain election integrity, are the ones the UN observers are visiting. Meanwhile, the election is being stolen right under their noses.

The Sec of State in North Carolina is Elaine Marshall, a Democrat.

Earlier this year, she posted a message  on her campaign website asking visitors to sign a petition against voter photo ID.  She recited the mantra of the left – that the law is a solution to a problem that doesn’t exist….

Voting is a basic, fundamental right in our country – and any attempt to suppress voters must be stopped.

Right now, the legislature plans to override Governor Perdue’s veto on a Voter I.D. law passed last year. This law will disproportionately hurt seniors and low-income voters. If this law were to pass, folks like my 92 year old mother would need a photo I.D. in order to practice a basic right. This law will prevent thousands of North Carolinians from voting in November. It is voter suppression at its finest.

I cannot sit back and watch thousands of voters have a basic right stripped from them. That is why we are launching a petition this week demanding the legislature drop this veto attempt.

Sign our petition and add your name to the chorus of people demanding an end to this legislation!

Voter I.D. laws are a complicated solution to a problem that doesn’t exist – voter fraud is fiction, not fact.

We already have laws that punish violators of election laws. Most election violations would not be cured by an I.D. requirement. This proposal would add costs and burdens to eligible voters in violation to our NC constitution that requires all elections to be free.

And again, I cannot stress this enough, this legislative move will disenfranchise thousands of voters. In fact, right-wing groups desperately trying to prove that fraud exists have taken to trying to commit fraud themselves, rather than find factual examples.

It is ridiculous – but we have the power to ensure Governor Perdue’s veto holds in the legislature.

Add your name to the petition here >>

If this veto is overturned, a lot of good people will have no chance to vote in November.

It would be a terrible shame if we let that happen.

As James O’Keefe has proven once and for all – voter fraud exists and it is facilitated by corrupt Democrats like Terry Moran’s son, and crooked Secretary of States like Elaine Marshall.

Benghazi is a huge story, and it deserves more attention than it’s getting in the MSM – but so does this one.  None of Obama’s scandals will amount to a hill of beans if we allow the Democrats to steal this election.

The Raleigh News & Observer reports that the reason for the overabundance of 112 year olds is  that they’re people who were registered before a state requirement switched from age to birth date, and that a default birthdate of Jan 1 1900 was filled in for people who didn’t update or whose records couldn’t be otherwise verified.

Eric Soderstrom has been investigating and posted his findings, thus far and has an exclusive: NC’s Centenarian Voters Include First Timers, 2012 Registrations:

The North Carolina State Board of Elections offers an online tool that allows anyone to look up a voter’s registration status and voting history. This data includes the date an individual registered to vote. Using this tool and the data from the Board of Elections I have already found more than 30 North Carolina centenarians who were registered after the birthdate requirement went into effect including 15 who registered in 2012. And yes, some of them are 112 year-olds. (And none of them is Susie Brown, a centenarian who did register to vote for the first time this year).

Of the 15 registered in 2012, 14 did not vote in person (i.e. they voted absentee by mail as opposed to one-stop voting in person). One of those 14 requested a second mail-in ballot just 10 days after her original ballot was mailed. (And no, it wasn’t lost in the mail, as her vote for the original ballot was recorded on October 10).

8 thoughts on “Speaking of Voter Fraud, What’s Going On In North Carolina?”