I made the trek from South Kansas City to Topeka, KS, this morning to attend the second 2nd Amendment Rally of the year that was held, today at all of our state capitols. The Topeka rally was not organized by any formal group –  it was loosely organized on Facebook, but still managed to attract 200 or so people on a chilly work day. 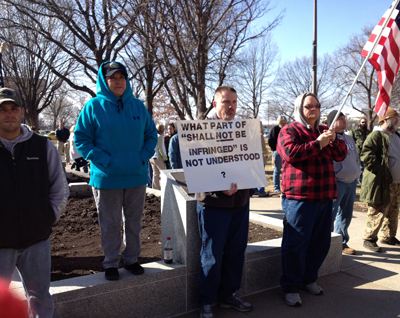 The KS Secretary of State, Kris Kobach was the keynote speaker at the rally, and he hung around, talking to people and posing for pictures when he was through. He made note of how the folks who feel guns are inherently bad (*cough* Piers Morgan *cough*)  don’t understand the many uses we have for guns: getting food,  hunting, pleasure, sporting purposes, self defense, and purposes that our founding fathers envisioned as perhaps the most important – the protection of ourselves, collectively – the protection of the free people against an oppressive government. 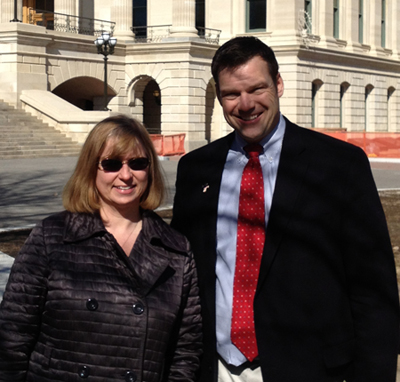 A black Second Amendment supporter named “Landmine Billy” asked the crowd, “how many racists are out there, today?” No hands went up until he explained what R.A.C.I.S.T was an acronym for  – “Rational And Constitutionally Inspired Sensible Thinker”.

Here is a montage of some of the other speakers – scheduled, and open mic:

More than 100 tea party Republicans and constitutionalists braved sub zero wind chill today for a rally outside the State House in support of the Second Amendment. One of many protests held across the country, the Maine gathering attracted the attention of Gov. Paul LePage. A. J. Higgins has more.

There is no single sponsor for the rally, which is billed as a “patriot party” with multiple groups. A similar rally occurred Jan. 19, a Saturday; the Capitol was closed.“Let’s make it even bigger and better than the last one,” said a message on the website of the Oregon Firearms Federation.

I linked to myself at The Conversation, too, thanks me!

Californians are turning in for the night knowing that a homicidal maniac is on the loose. Under normal circumstances, during normal times, that would be all anyone needed to know. But in today’s hyper-political environment, it’s become necessary to point out the political affiliations of every madman in the news because of the media double standard and hypocrisy.

Because we know that if former LAPD officer, Chris Dorner were a Republican, the left-wing media complex would be all over it. If we didn’t know what his political affiliations were (hard left), the media would be pointing fingers at the right because after all, he’s a disgruntled veteran and former cop – heck –  he fits the profile of a right-wing domestic terrorist. If it were not known beyond a shadow of a doubt that this guy is a huge Obama supporter, the left would be blaming his murderous rampage on the right.

Via Mediaite: Hannity: If Chris Dorner Liked Conservative Hosts Instead Of Liberal Ones, The Media Would Go Nuts:

2/7/13 – The manifesto written by murder suspect and LAPD office Chris Dorner contains some bizarre ramblings about how much Dorner loves media personalities like Chris Matthews, Piers Morgan, and Ellen DeGeneres. Sean Hannity tonight noticed that these details have gone largely unreported in the media, whereas if he had been a fan of right-wing TV hosts, the liberal media would have been eager to report on it to death. Hannity pointed out how Dorner is a big fan of liberal politicians and celebrities, while finding the NRA a deplorable organization. Hannity remarked, “don’t expect to hear much about this on liberal news outlets,” since Dorner appears to be a fan of networks like CNN and MSNBC. Hannity brought on Media Research Center president Brent Bozell to take on the media coverage, or lack thereof, of the manifesto.

Here’s the NY Times story on Christopher Dorner. The authors devote a little space to his “manifesto”:

The 6,000-word manifesto was bristling with anger and explicit threats, naming two dozen police officers he intended to kill. Mr. Dorner laid out grievances against a police department that he said remained riddled with racism and corruption, a reference to a chapter of the department’s history that, in the view of many people, was swept aside long ago.

No mention whatsoever of the political and media commentary that made up a significant portion of his manifesto. Is it relevant that Dorner wanted to smash George Zimmerman’s head in or that he was a fan of MSNBC and CNN? Apparently the Times thinks it is not.

John Hayward, The Conversation: Hoist upon their own Climate of Hate petard:

I hope everyone has seen the flashback video of Piers Morgan telling Mark Kelly that Sarah Palin should call Kelly’s wife, Rep. Gabby Giffords, to apologize for her alleged role in creating the “Climate of Hate” that led to the Tucson shooting.

If not, give it a couple of spins while you listen to Morgan whining and crying like a pitiful wretch, now that L.A. spree killer Chris Dornerspecifically named Piers Morgan as one of his inspirations.  Time to live up to your own standards, Piers.  Get on the phone and start apologizing to the families of Dorner’s victims for your role in the murders.  Do it live on the air, and maybe you can squeeze out a few more ratings points for CNN.

And he loves him some gun control:

Who in there right mind needs a fucking silencer!!! who needs a freaking SBR AR15? No one. No more Virginia Tech, Columbine HS, Wisconsin temple, Aurora theatre, Portland malls, Tucson rally, Newtown Sandy Hook. Whether by executive order or thru a bi-partisan congress an assault weapons ban needs to be re-instituted. Period!!!

Mia Farrow said it best. “Gun control is no longer debatable, it’s not a conversation, its a moral mandate.”

Sen. Feinstein, you are doing the right thing in leading the re-institution of a national AWB. Never again should any public official state that their prayers and thoughts are with the family.

If the consequences weren’t so tragic, one could almost find laughable the way in which this guy takes hackish lefty arguments to an extreme. I’m hopping mad about mass killings not being reined in by gun control. So I’ll show you! I’ll commit mass killings with guns to prove my point about how people like me should not have guns!

John Nolte: Piers Morgan: L.A. Murder Spree Has ‘Nothing To Do With Politics’ :

Funny thing about this new policy of Pier Morgan’s–I mean his not wanting to bring politics into America’s latest mass-murder spree. Because in the past, whenever the CNN host was able to exploit dead innocents and sanctimoniously demand the government restrict our Second Amendment civil rights, he has done so without shame or conscience.