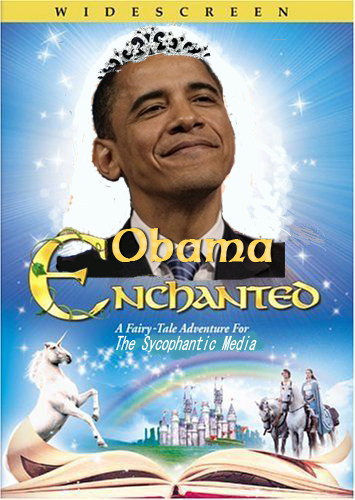 Anyone who’s getting tired of the term, “charm offensive” to describe Obama’s disingenuous attempts to “reach out” to Republicans would do well to remember the MSM’s long history of  coordinated messaging.

In a flashback to the 2000 election, Rush played a montage of media types speaking perfectly in synch with each other in their reactions to Presidential candidate, George W. Bush’s VP choice of Dick Cheney. “Gravitas” was the word of the day. Bush needed some, you see – because he was such a dolt.

Who thinks Obama is charming? He’s the opposite of charming – he’s a malicious, hyper-ideological cold fish who wouldn’t compromise with his political enemies any more than he would compromise with a dung beetle. But Obama needs this narrative so he can come back in 2014 and say he reached out to the Republicans in a good faith effort to work with them, but they rejected his outstretched hand of friendship. Of course, Obama’s idea of compromise is “My way, or the highway” and the highway usually involves a lot of helpful media coordination. I suspect the buzzwords in 2014 will sound something like intransigent, inflexible, stubborn, or obstinate to describe the evil GOP hostage takers who wouldn’t compromise with His Highness. Not highly original, and a replay of past message coordination – but it’s all they’ve got.

As Rush notes, Obama is falling in the polls, he’s in some kind of trouble, so  “here we are in the middle of March, and he already needs a charm offensive?  His political capital is largely gone?”

That’s what happens when your demagoguery is so over the top, it’s laughable, your dastardly scheme to blame Republicans for sequester cuts you are making as painful as possible is painfully obvious to anyone remotely paying attention, and your DHS starts releasing dangerous illegal immigrant criminals by the thousands. Hey, we’re only in mid-March and the Obama administration is already embroiled in several new scandals. No wonder he needs a “charm offensive.”

video via The Daily Rushbo

It’s only due to his loyal toadies in the media that his numbers are as high as they are.

And yet, some members of the media have had it with the BS. Ron Fournier of National Journal appears to be one of them because he’s been on a roll in recent weeks, reporting all sorts of inconvenient stories that don’t line up at all with the proper media narrative.

According to Ron Fournier of National Journal an anonymous White House official told reporters that Obama’s so-called “charm offensive” is a “joke,” a waste of everyone’s time, and basically a stunt for the media. The  official made the comments after being promised anonymity.

Via The Weekly Standard:

“This is a joke. We’re wasting the president’s time and ours,” complained a senior White House official who was promised anonymity so he could speak frankly. “I hope you all (in the media) are happy because we’re doing it for you.”

(I don’t think they were supposed to report that.)