Bloggers like Matthew Boyle and Daniel Halper have noticed that the Obama family’s been on an extravagant vacation binge since the beginning of the year. Last year, the Obamas avoided going on  their usual exorbitant vacations because it was an election year. But now, they’re making up for lost time.

“In the first three months of the year, members of the first family have been on three vacations, averaging a vacation a month. And now it’s being reported that the first daughters are on a spring break vacation in the Bahamas,” Daniel Halper reported at the Weekly Standard.

The Obamas began the new year in Hawaii. Then Michelle and the First daughters vacationed in Aspen over President’s Day weekend. While the rest of the family was in Colorado, Obama flew to Florida for a golf weekend with Tiger Woods.

And now it’s being reported that the first daughters are on Spring Break in the Bahamas. “Sasha and Malia Obama are quietly vacationing at the Atlantis resort on Paradise Island in the Bahamas, Breitbart News has learned,” a report reads.

According to Judicial Watch, Malia Obama’s trip to Mexico last spring break, during which she was apparently accompanied by Secret Service protection, cost taxpayers $115,500.87. Sasha did not accompany Malia on that trip.

And that’s the deadly part of the report. Obama’s sequester demagoguery – with the closing of the White House tours (ostensibly because of the Secret Service expense) which the Regime desperately wanted to blame on Republicans, (even though they tried to send Obama a bill that would have given him as much flexibility as he needed to make prudent cuts, and it was rejected by Democrats……so they could blame Republicans), is flopping badly. And this story isn’t helpful, especially in light of the fact that the Regime insisted on keeping the White House doors closed to the public, even as families traveled to Washington on Spring break, and many others will be in Washington in April to see the cherry blossoms. It doesn’t look good.

Enter shrill race-baiter, Joan Walsh, shrieking raaaaaacist to anyone who mentions this very inconvenient (to the Regime) narrative.

Arguing that Boyle’s reporting has a racial undercurrent, Walsh’s post is entitled: “How not to seem like a racist: A tip for right-wingers angry about charges of racial bias: Try treating the Obama daughters with decency.”

Walsh’s general theme, and explicit advice she repeats, is: “Try treating his [Obama’s] daughters with respect.”

Walsh goes on to decry various recent reports concerning the First Daughters, noting that “[r]eporters don’t write about minor first chidren except when they’re attending ‘official or semi-official events’.” She then quotes the Washington Post‘s Paul Farhi’s writing on the subject last year:

The ban on such coverage has existed through many administrations by informal agreement with the White House Correspondents’ Association, which represents the interests of journalists who cover the president.

“There’s a general feeling among the press corps that it wants to be respectful” of the president’s children, said Caren Bohan, the White House reporter for Reuters who is president of the WHCA.

In the viciously worded article, Walsh not only refers to Boyle as “untalented” but quotes Esquire‘s Charles Pierce’s recent post describing Boyle as “that pudgy little monster.”

And, one might very well walk away agreeing at least with Walsh’s theme that reporters should all treat presidential “daughters with decency.” Fair enough. Except — oh, wait… there’s this: 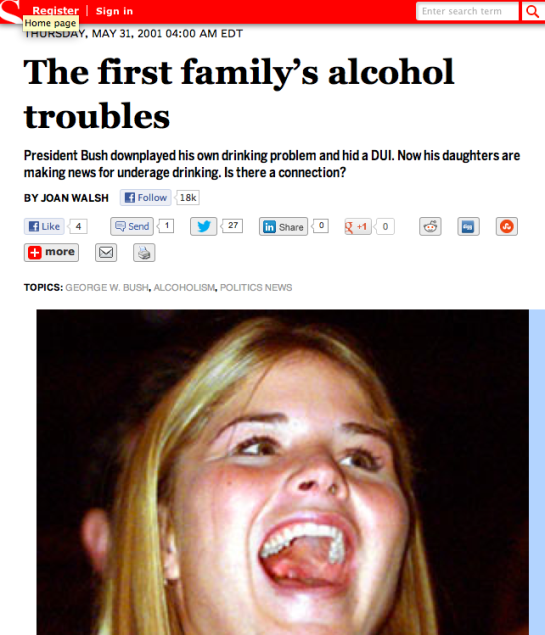 Oh snap! Joan Walsh, you just got serrrrved by AJ Delgado of Mediaite.

Keep reading to fully appreciate how vicious the depraved and hypocritical Walsh was in her hit piece on the Bush girls. I remember hearing about it and thinking, good Lord, leave the girls alone. They’re in college!

But here on the right, no one is attacking the Obama daughters, personally. “Sasha and Malia Obama are quietly vacationing at the Atlantis resort on Paradise Island in the Bahamas, Breitbart News has learned” is not a personal attack. Nor is it raaaaacist.

We are questioning the First Family’s decision to take these expensive vacations when “we’re all supposed to be sacrificing a little.”

Since no one in the MSM wants to do it.

Speaking of race-baiters….you’ll love this via Watching the Watchdogs: SPLC — 2013 — Still No Minorities at the Top After 42 Years:

Last week, Watching the Watchdogs examined the Southern Poverty Law Center’s latest “hate map” fundraising tool and broke the amazing, astounding, unprecedented news that for the first time in history the number of alleged “hate groups” designated by the SPLC’s Public Relations chief, Mark Potok, (something even the FBI cannot do…), actually DECLINED!!

While this inconceivable turn of events left many investigators gasping in amazement, a quick head-count of the SPLC’s top executives reveals a caucus as Caucasian as it was the day Morris Dees opened the doors of the company in 1971. There are still some unbroken traditions that one can count on in this mad, mad world.

This seeming incongruity was brought to the attention of Mr. Dees 19 years ago by journalists Dan Morse and Greg Jaffe in their week-long exposé in the SPLC’s hometown newspaper, the Montgomery Advertiser, in 1994.

Last week, the story about the Florida Atlantic University student who was suspended because he refused to stomp on a piece of paper with the word “JESUS” written on it, became a huge national news story.

After a public outcry,  FAU issued an apology and an assurance that no disciplinary actions had been taken by the university.  It had been reported that Ryan Rotela, the student, had been brought up on academic charges by the school and  would no longer be allowed to attend class.

“We sincerely apologize for any offense this has caused,” the apology said. “Florida Atlantic University respects all religions and welcomes people of all faiths, backgrounds and beliefs.”

“We can confirm that no student has been expelled, suspended or disciplined by the University as a result of any activity that took place during this class,” the statement read.

However, according to a letter obtained by Fox News,  Rotela appears to be facing a litany of charges – including an alleged “violation of the student code of conduct, acts of verbal, written or physical abuse, threats, intimidation, harassment, coercion or other conduct which threaten the health, safety or welfare of any person.”

The letter written by Associate Dean Rozalia Williams states, “in the interim, you may not attend class or contact any of the students involved in this matter – verbally or electronically – or by any other means,”  “Please be advised that a Student Affairs hold may be placed on your records until final disposition of the complaint.”

Hiram Sasser, director of litigation at the Liberty Institute, told Fox News the university’s behavior is “outlandish” and called their press release “inaccurate.”

“We believe the university punished him in retaliation for him exposing the class assignment to the public,” Sasser said. “Sadly, it is a testimony to the indoctrination that some of the public schools and universities are engaging in – to demonize anything that was valuable in the culture.”

The Liberty Institute wants Rotela reinstated with full credit for the course – along with an apology.

“He’s being punished because he told the professor to never do the assignment again because it’s offensive and that he was going to complain to the university,” he said.

Rotela, a devout Mormon, ran afoul of the university after he refused to participate in a classroom assignment that involved writing the name “Jesus” on a piece of paper – and then stomping on it.

The Instructor,  Deandre Poole, just so happens to be  vice chairman of the Palm Beach County Democratic Party, a fact the Florida blog BizPac Review was the first to point out.

The university apologized,  late Friday, saying the exercise “will not be used again.”

Rotela told Fox News he was baffled by the university’s latest statement.

“The university has a huge problem with integrity,” he said. “They are tripping over their own words.”

The “Notice of Charges” accused the student of using threatening language. The school did not return calls seeking clarification.

Sasser says publicity about the case has led to a number of high-profile attorneys volunteering their services.

“The textbook reveals the agenda,” he said. “So-called intellectual enlightenment is stomping on everything that has held western civilization together for the past 2,000 years.”

Here’s Andrew Breitbart in 2011 speaking on the Cultural Marxism that has become the scourge of entertainment and higher education..

Sean Hannity had Ann Coulter on his show, Monday night to talk about  Jim Carrey’s anti-gun Funny or Die video.

Asked by Hannity if she thought Carrey would make fun of African-Americans or Muslim Americans the way he mocked rural white gun owners, Coulter responded, “no, you’re allowed to make fun of white southerners and Christians in America.” She chalked Carrey’s video up as the latest example in the “epidemic” of “wealthy people” trying to tell the rest of country not to carry and own firearms, a clear allusion to Mayor Bloomberg’s gun control campaign. Linking Carrey’s video to Hannity’s assertion that the government is buying up a billion rounds of ammunition, Coulter claimed, “that’s the only question with gun control: should the government and rich elites like Bloomberg, Feinstein and Jim Carrey have a monopoly on force?”

Responding to Sean Hannity’s point about the insulting  stereotype  of the “tobacco-spitting hee-hawing, Southerner” portrayed in the video, Coulter responded, “I think it’s worth pointing out that whenever they’re running for office, they pretend to BE those hicks. You always get the fake Democrat American with hay in his hair, shooting his gun like Joe Manchin….doing square dances — oh, screw you, she laughed, “you’re Democrats!”

Hannity also got in a question about the Regime’s massive ammo buys. Coulter pointed out that after Fast and Furious, people have reason to be suspicious of this government.

“Are they just refusing to answering questions about these gun buys (some of which we know are happening, why aren’t they explaining it?) to try to induce paranoid responses from right wingers?” She asked.

“Please note, again – they can have guns, we can’t”, she concluded,  that is the only question with gun control…should the government and rich elites like Bloomberg, Feinstein and Jim Carrey have a monopoly on force?”